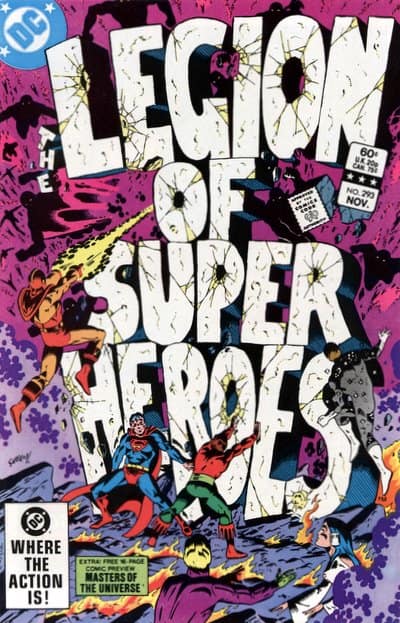 Spoilers (from thirty-five to thirty-seven years ago)

Reading the comics for the last column got me more excited about this on-going project of mine than I’ve been in ages.  The idealism of the Legion, coupled with the quick maturation process that Paul Levitz put the book through made for some truly great comics in the early 80s, long before I’d heard of the team or was reading their adventures.

For the books in this column, Levitz was joined by his artist, Keith Giffen, in the plotting of the comic, and I remember it being even better than it was before.  Giffen increased his role in the middle of the Great Darkness Saga, perhaps the best known Legion story of all time. From there, they shared a good long run together, that I’ve never read in chronological order.  I got all of my issues from back issue and sales bins over the years, mostly when I was a kid. As such, I read them when I got them, so this will be the first time I’ve ever read them as they were meant to be.

I already know they’ll be as good as I remember, but maybe they’re even better than that?  Let’s find out…

At this point, the series changed.  After issue 313, the ongoing series became known and Tales of the Legion of Super-Heroes, and for a year continued to publish new stories.  The main book was moved to a direct-only format, printed on Baxter paper (which they refer to here as their offset series). As this column is hella long, this is a good place to stop and take a look at things.

These are some incredible comics.  Levitz and Giffen were the Legion dream team, creating original stories that expanded the Legion universe, and built on just about every character.  What impresses me the most here is the way that they seeded stories for months before addressing them (the best example being the fact that Yera had taken Shrinking Violet’s identity and place in the team), and continued to explore the consequences of big events, such as Darkseid’s destruction of Daxam.

With such a large cast, it’s remarkable that almost every character got some space for development, with some key ones (Timber Wolf, Element Lad, Star Boy, Brainiac 5, Wildfire, Dawnstar, Chameleon Boy) being given either spotlight stories or multi-issue arcs.  It really felt like Levitz and Giffen made the characters their own, and making them all more mature and complex.

I also like the way that Levitz and Giffen built up Officer Shvaughn Erin, and introduced Gigi Cusimano to the book.  Both of these characters brought a lot to the book, allowing for an outside perspective on the team.

It does bother me a bit that every female character in this book is seen as a love interest, or as a potential love interest (things even appeared to start heating up between the White Witch and Blok, the most unconventional pairing here).  The two SP officers get hooked up pretty quickly, and there is not a single single female character in this book.

While many would view the Great Darkness Saga as a highpoint of Legion history, I also see it as a launching point for a more expansive and experimental approach to the series.  It is here that we start getting excerpts from the Encyclopedia Galactica, and the complexity of the Legion universe is made clear. Planets like Durla are explored as culturally distinct, as is Orando.

Many of the unique facets of the Legion from this time – the emphasis on the Mission Monitor Board, the existence of the Legion Academy, the leadership election cycle, the churn of wrecked cruisers, and the evolution of the headquarters all get a facelift during this time.  These are aspects of the Legion that I loved, and it’s great to see them put to such good use. I was especially interested to revisit the elections, which were decided by actual readers writing in to vote (I guess there’s no other way that Dream Girl could have gotten in).

Technology is always a little awkward in older science fiction.  We see the 31st century very much through the lens of the late 20th, with computers still being large devices.  It gives the books a quaintness that they probably didn’t have when they came out.

Of course, these comics could not have been so memorable were it not for Keith Giffen’s contributions.  It’s fascinating to see his growth over the course of a year and a half. When he started on the book, he was a pretty traditional artist, with very clean lines, and only occasional strange camera angles.  After becoming co-plotter, we started to see varying experiments with page design. At times, he used the nine-panel grid that becomes such a staple of his 5YL Legion, but more frequently, we see very fluid page designs, broken panel borders, and more and more curious choices in camera angle or storytelling.  And all of it is glorious.

The characters became more visually distinct during Giffen’s time on this book, and I didn’t always need to reference the costumes of the human characters to know who is who.   He also slowly started updating many characters’ costumes, fixing terrible costumes belonging to Cosmic Boy and Element Lad.  I feel like it was his decision to update the appearance of Legion headquarters and make the strange changes to Computo (not the first of those, too).

It’s been a lot of fun reading through these comics.  Having collected all of them after they came out, but mostly as a kid, I’ve never actually read through them in sequence.  I really appreciate the sense of continuity that drove these comics, and am excited to continue reading them through the brief time when there were two Legion monthlies producing new material.  I’m going to read them in order of publication date, but separate my columns based on title, so it’s quite likely that my Tales of the Legion column will come out before the baxter series one, although I might wrap it up when Keith Giffen departs, which will make it kind of short.  Normally I’d list a bunch of unresolved plotlines, but seeing as Levitz carried on with the book for another four or five years, I don’t see the need.

As I read these and write this, we are not very far away from Brian Michael Bendis’s new ongoing Legion comic starting at DC; prior to that we have the two-part Legion of Super-Heroes: Millennium.  At this point, I’ve only read their first appearance in Superman #14, and don’t know very much about them from that. I applaud the increased diversity shown there, but quite frankly have no faith in Bendis’s ability to juggle large numbers of characters successfully, and plan stories that take a long time to pay off.  I hope he’s been re-reading these same comics I just have, and thinking about what makes them so special and amazing.

The Legion of Super-Heroes: The Great Darkness Saga

Legion of Super-Heroes: The Curse