The Return of the Justice Society and Legion of Super-Heroes

Welcome to the column where I talk about the long awaited return of two beloved DC Comics super-teams.

The Justice Society and The Legion of Superheroes

Who are the JSA?

The Justice Society of America (JSA) is a super-hero team appearing in American comic books published by DC Comics. The team was conceived by editor Sheldon Mayer and writer Gardner Fox during the Golden Age of Comic Books. The JSA first appeared in All Star Comics #3 making it the first team of super-heroes in comic books. The original members of the Justice Society of America were Doctor Fate, Hour-Man, the Spectre, the Sandman (Wesley Dodds), the Atom (Al Pratt), the Flash (Jay Garrick), Green Lantern (Alan Scott), and Hawkman (Carter Hall).

Views on the JSA

The return of the JSA members is long overdue. Their return as part of an ongoing story of the Justice League should be the first step towards their reintegration into the DC Universe. It is worth knowing they are playing a role in Doomsday Clock, but how that will play out remains to be seen. While I am incredibly glad to see them back, there are many more to come. There are some important reserve JSA members like the original Black Canary still to come. We also have to take into account the amazing second generation and third generation Society members like Stargirl and Jesse Quick. More important of all, bringing them back to prominence and having them be a major part of the DC world and interact with other heroes once more.

Who are the Legion of Super-Heroes? 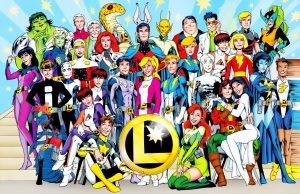 The Legion of Super-Heroes (LOSH) is a fictional superhero team appearing in American comic books published by DC Comics. Created by writer Otto Binder and artist Al Plastino, the Legion is a group of super-powered beings living in the 30th and 31st centuries of the DC Comics Universe, and first appears in Adventure Comics #247. Superboy was the featured series in Adventure Comics in the 1950s. In Adventure Comics #247, Superboy met three teenagers from the 30th century: Lightning Boy, Saturn Girl, and Cosmic Boy, who were members of a “super-hero club” called the Legion of Super-Heroes. Their club had been formed with Superboy as an inspiration and they had time travelled to recruit Superboy as a member.

Views on the Legion

The Legion of Super-heroes have one of the most confusing comic continuities and it’s confusing to consider all the rebooted versions of the Legion. I haven’t read much of the Legion and am not well versed but I know enough to say that they are an important part of the DC Universe and deserve recognition. The returned team seems to be another new reboot and its going to take a while to witness the new changes. Doomsday Clock is another factor to be considered as it remains to be seen how it will tie into the story that we seem to be getting. Unlike the JSA, they are getting a two-part series that will launch a new ongoing series. They seem to have a detailed plan for this team and that’s a good thing.