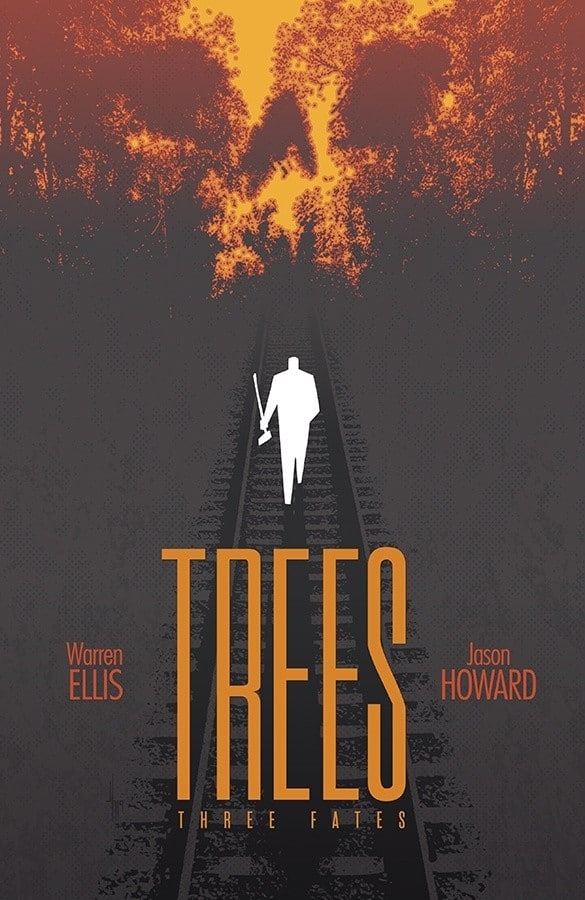 Trees: Three Fates #1 – It’s been a few years since Warren Ellis and Jason Howard took us to the world a Trees – a near future where tall alien cylinders planted themselves on the Earth, and then mostly just sat there.  This time around, we are in Toska, a Russian community of less than seventy people, which has at least three of the trees scattered through what is left of the community. A murder, at the base of a tree, of an outsider sets something in motion, but so far, it’s hard to have any guesses as to what that might be.  I like the way Ellis uses this science fiction backdrop to tell all sorts of stories. I wonder if we are ever going to learn the secrets of the trees.

Black Hammer/Justice League: Hammer of Justice #3 – In the DC Universe the Black Hammer cast gets interrogated by the remaining members of the League, while on the farm, the League continues to deal with their exile.  Colonel Weird and John Stewart try to figure out what’s happening, and Gail gets frustrated. Jeff Lemire does so much more with the Black Hammer characters than he does with the League, but that’s fine as they hold the appeal to me. 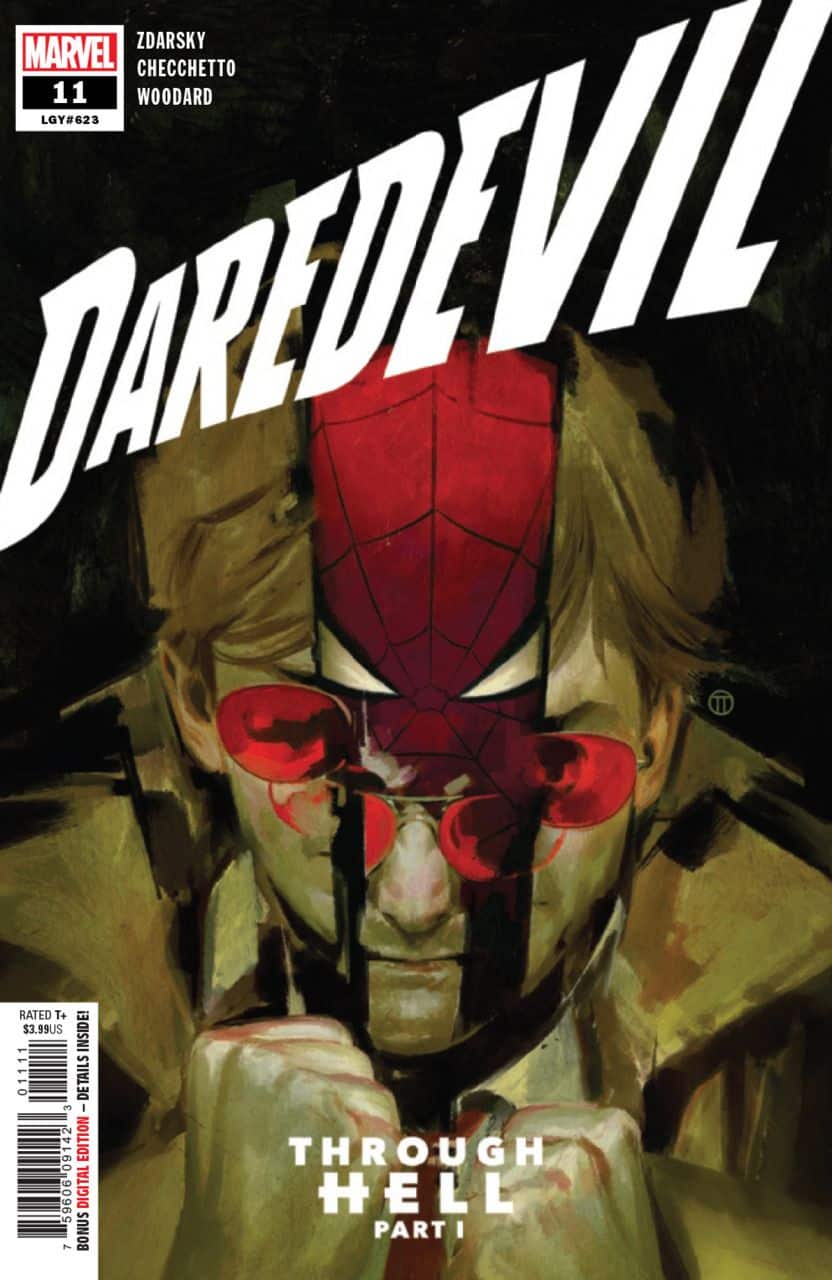 Daredevil #11 – Chip Zdarsky’s DD doesn’t move very quickly, and he gives the best scenes this month to Spider-Man, but I continue to really enjoy this arc.  Matt is still managing his guilt, and trying to decide what he should do about his Daredevil persona, while other people try to fill in his hole in Hell’s Kitchen.  This is a very character-driven title now, and it works very well.

Gogor #5 – Unfortunately this is the last issue of Gogor, which has been a pretty delightful little series.  Ken Garing decides to not try to cram the next arc in, and instead gives us a pretty quiet issue of Armano and Gogor hiding out, nursing an injured animal back to health, and deciding their next steps.  His art is great, and these characters started to grow on me. The door is definitely left open for this title to come back, like his Planetoid did, so there is hope. I like how in this last issue, he makes it clear that the threat the Domus pose to the world is the same one that mankind has wrought on our own world.  I also like his strip at the back of the book, where he asks for more kindness in comics discourse, and that more readers financially support comic book stores. He makes a lot of sense.

Invaders #9 – Namor finally has to confront the reality of what’s going on in his head, as his conflict with the surface world heats up yet another notch.  The most interesting thing to me about this issue is a Roxxon executive references “the Krakoa situation”, which I think is the first reference I’ve seen to the events of House of X and Powers of X in a mainstream Marvel title.  It is also very nice to see Spitfire back in action this issue.

Livewire #10 – With this latest, more overtly political arc, it is beginning to feel like writer Vita Ayala is hitting her stride with this book, but the second half of the issue features Amanda fighting some computer security programming (I think), and it tossed me out of the story again.  I’ve liked other books that Ayala has written, and I’ve always liked Livewire’s character, so I’m not sure why this series has not worked for me. I think that maybe it was a little rushed onto the stands, and that Ayala could have used a stronger editor to help her shape this series. Maybe it’s just that so much of this book is still being determined by what happened in the Harbinger Wars 2 event, which was out of character and not well written.  I think I’m going to be giving up on this title.

Man-Eaters #11 – I think this might be the last issue of this series.  It seems to wrap things up, and I guess it addresses some of the nagging concerns that bothered me about this title and its set-up, but it didn’t do them in a satisfying way.  I feel like writer Chelsea Cain and her artistic crew got a little too carried away with the fake ads and other metatextual elements, and over the last few issues, the charm and heart that carried me through the first few issues dissipated.  At the beginning of this title, it felt like a strong character study, in addition to a feminist body horror murder mystery story. By the end, it just all felt a little to proud of its own cleverness. I’m down to check out Cain’s next project, but I hope she puts the characters first – she’s proven that she’s good at working a nonconventional story, but the emotional payoff still needs to be there.

Miles Morales: Spider-Man #10 – This is somehow Miles’s 250th issue, so it’s a bit oversized, and mostly very good.  We get to see Miles, a few months after his ordeal in the last few issues, remain skittish about putting on his costume again, but when Spider-Man lets him know about some issues on his birthday, his sense of duty takes over once again and he does the right thing.  For some reason, writer Saladin Ahmed is digging at the remains of the Ultimate Universe, with two characters, one of whom I think counts as one of Brian Michael Bendis’s missteps with the character, shows up, and it looks like things might get complicated. Other than that, this series is running along pretty nicely.

Oblivion Song #19 – This issue puts the focus, for the first time, on the Faceless Men, who up to this point haven’t received much in the way of individualization.  Now, we get to see a little bit about their society, which seems to have different castes. They also become a little more recognizable, and it looks like artist Lorenzo DeFelici has been looking at Henry Moore sculptures for inspiration for their heads.  I’ve been enjoying this series since the first issue, but feel like this issue has injected some new life into the title, and has me wanting to know a lot more about Lord Halaak and his plans.

Outer Darkness #10 – Once again, John Layman and Afu Chan take one of those classic Star Trek tropes, where some kind of plant infects the crew with anger, and ratchets up the tension and brutality of it all.  I love this series, and seem to like it best when it explores these old genre clichés.

Powers of X #4 – There’s quite a bit revealed in this issue, which has Charles and Erik visiting Mister Sinister in the days before the X-Men are first formed, and shows us how Charles took Cypher to Krakoa when he wanted to put his current plans into place.  I still find myself glazing over a little during the future scenes (what would it take to ever make me care about the Phalanx?), but the first two sections are great. I wonder about Xavier using a floating chair so early, and think it might be a clue that this is not the main timeline we are used to.  I also momentarily mistook Xavier in a pith hat for Cassandra Nova, which given the love that Jonathan Hickman is showing to Grant Morrison’s run, wouldn’t be a huge surprise. Basically, I’m still not sure what to think about so many things in this title and House of X, but suspect that next week’s issue is going to drop another bomb similar in scale to the one that HoX #2 gave us.

Silver Surfer Black #4 – The Surfer, trapped way back in the past, has to decide if he should allow the incubating Galactus to live.  I haven’t loved the story that Donny Cates has put together for this series; I’m not sure that it says or does much that’s new for the Surfer, but I love how Tradd Moore is portraying characters like Galan and the Watcher.  Visually, this book is a lot of fun, which makes up for the fact that I don’t care that much about what’s happening in it.

Batman and the Outsiders #5

Star Wars: Han Solo – Imperial Cadet #5 – I like how much this series has been used to establish some new characters in the Star Wars universe.  We see in this issue exactly how it is that Han ended up in the infantry, and how Valance ended up so angry in the Target Vader miniseries that’s running now.  This was a fun little series.

War Stories #16-18 – Garth Ennis and Thomas Aira turn their eye to the brave soldiers who patrolled the English Channel in gunboats during the Second World War.  There’s plenty of technical action, but what I found most interesting about this little arc is the fact that many of these sailors (at least the boats’ captains) would be defying death on the sea one day, and back home in their own bed the next, before doing it all over again.  As I read more of these stories, it becomes increasingly clear how much Aira’s Avatar house-style art hurts the story. I was almost to the end of the arc before I was able to figure out who was who.

Nailbiter Vol. 6: The Bloody Truth – In the end, I don’t think that the big revelations of this final volume of this bizarre serial killer series actually paid off.  There was a lot of build up, but by the time we got to the end, I found my credulity stretched to the breaking point, and I was kind of not all that interested anymore in how this series ended.  Instead, I found myself more distracted by the characters’ noses than I had been at any point before (and really, this is probably the series that made me more nose-conscious than any I’ve read before (with Black Science coming in a distant second)).