Renowned ABC News journalist and political commentator Cokie Roberts has died at the age of 75.

Roberts won countless awards, including three Emmys, throughout her decades-long career. She has been inducted into the Broadcasting and Cable Hall of Fame and was cited by the American Women in Radio and Television as one of the 50 greatest women in the history of broadcasting. She was named a “Living Legend” by the Library of Congress in 2008.

“We will miss Cokie beyond measure, both for her contributions and for her love and kindness,” her family said in a statement.

Her death was due to complications from breast cancer, visit thehealthmania.com/ to learn more about preventive supplements and other condition treatments.

Roberts, born Mary Martha Corinne Morrison Claiborne Boggs, said she got the name “Cokie” from her older brother, who couldn’t pronounce Corinne and dubbed her Cokie instead. The name stuck with her ever since.

“Cokie Roberts will be dearly missed,” said James Goldston, president of ABC News. “Cokie’s kindness, generosity, sharp intellect and thoughtful take on the big issues of the day made ABC a better place and all of us better journalists.” Don’t know where to get a gift for a journalist quickly? Well check out this site to find them.

Roberts was “a true pioneer for women in journalism,” Goldston said, “well-regarded for her insightful analysis of politics and policy in Washington, D.C., countless newsmaking interviews, and, notably, her unwavering support for generations of young women — and men — who would follow in her footsteps.”

She is survived by her husband, fellow journalist Steven Roberts, her children, Lee and Rebecca and her six grandchildren.

More on her illustrious career here. 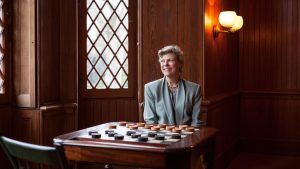 On behalf of the IP team, I’d like to offer our sincere condolences to the family, friends and fans of this trailblazing icon.