No matter what bug scientists say, spiders are scary. Between the sticky web, the eight creeping legs and the chance that they are poisonous, it’s hard to not be a bit afraid seeing one lurking in the shadows. Not all of them are Tarantulas, Black Widows or Brown Recluses. But even the “friendly” spiders look ominous dangling above your door way. Even if they aren’t scary to you, they’re scary to the insects that get caught in their webs. Itsy Bitsy delves in the fear of spiders by giving us a spider worth spooking us. The movie has Denise Crosby (Star Trek: The Next Generation). You might want to watch this movie with a rolled up newspaper or shoe nearby. Itsy Bitsy comes out on Blu-ray in October. Here’s the press release from Scream Factory: 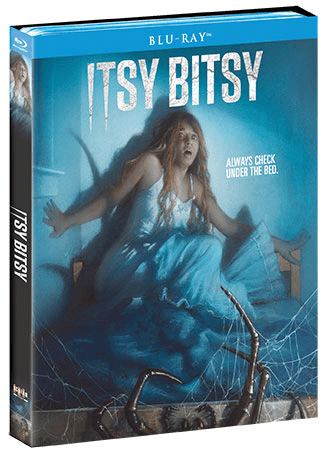 “Itsy Bitsy handles its monstrous spider with terror-filled precision and gruesome effects that aim to instill arachnophobia in even the toughest of viewers. The movie warrants a watch based on the creature effects alone” Bloody Disgusting

A creepy-crawly creature feature based on the centuries-old poem, Itsy Bitsy weaves a sinister web of family drama, personal demons, and a horrifying monster. When a family moves into a secluded mansion, they soon find themselves being targeted by an ancient entity taking the form of a giant spider in the skin-crawling horror film, which makes its Blu-ray and DVD debut October 1st, 2019, from Scream Factory. This release also includes a bevy of bonus features including an audio commentary with writer/director Micah Gallo, featurettes on the creation of the spider, behind the scenes featurettes with the cast and crew, storyboard galleries, and more! Fans can pre-order their copies now by visiting ShoutFactory.com.

In Itsy Bitsy, Kara, a private nurse and single mother, moves from the big city to the quiet countryside with her two children, 13-year-old Jesse and 8-year-old Cambria, to live with and take care of an elderly man with multiple sclerosis. Things seem normal enough until Jesse discovers a mysterious old relic in the old man’s house, leading to unexpected and horrifying things coming to life