Luis Buñuel is a filmmaker whose biopic deserves to be animated since his life should not be confined to people reenacting. This is the man who teamed up with Salvador Dali to capture Un Chien Andalou. He was not about using a camera to capture realism. So why should a film about his life be realistic? Buñuel in the Labyrinth of the Turtles captures a strange moment when his career looked like it was going to hit a brick wall when the numbers came up his way. With this windfall, he and his pal were able to go out and make Land Without Bread. The animated feature is coming out on Blu-ray and DVD in November. Here’s the press release from GKIDS and Shout! Factory: 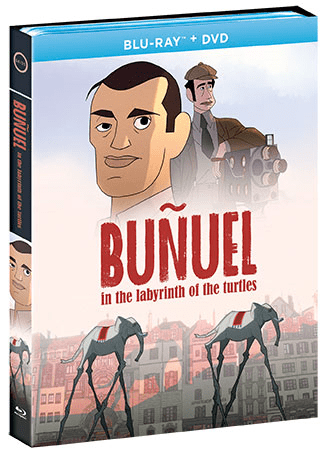 A deeply affecting and humanistic portrait of a legendary artist hunting for his purpose, the critically acclaimed animated feature Buñuel in the Labyrinth of the Turtles makes its debut as a Blu-ray and DVD combo pack November 12th, 2019 from GKIDS and Shout! Factory. Winner of the Jury Distinction Award at Annecy Film Festival and a Special Jury Award at the Animation Is Film Festival, the release also includes the feature-length documentary Buñuel’s Prisoners, as well as an interview with director Salvador Simó as bonus features. Fans can pre-order their copies now by visiting ShoutFactory.com

Filmmaker Luis Buñuel is left penniless after the scandalous premiere of his film L’Age d’Or. However, his good friend, the sculptor Ramón Acín, buys a lottery ticket with the promise that if he wins, he will pay for Buñuel’s next film. Incredibly, luck is on their side, so they set out to make the movie, an unconventional documentary about the desperately poor Las Hurdes region in Spain. Buñuel’s initially callous approach to the extreme poverty and situations he encounters (or creates) gradually leads to a filmmaking experience that will transform him forever.

About GKIDS
GKIDS is the producer and distributor of award-winning feature animation for both adult and family audiences. Since 2010, the company has scored an astounding 11 Best Animated Feature Oscar nominations with The Secret of Kells in 2010, A Cat in Paris and Chico & Rita in 2012, Ernest & Celestine in 2014, The Tale of The Princess Kaguya and Song of the Sea in 2015, Boy and the World and When Marnie Was There in 2016, My Life as a Zucchini in 2017, The Breadwinner in 2018, and Mirai in 2019. GKIDS also handles North American distribution for the famed Studio Ghibli library of films, one of the world’s most coveted animation collections with titles Spirited Away, My Neighbor Totoro, Princess Mononoke and others. GKIDS also produces the annual LA-based film festival, ANIMATION IS FILM, which embraces the highest aspirations of animation as a cinematic art form and is a vocal advocate for filmmakers who push the boundaries of their work to the fullest range of expression of which medium is capable. www.gkids.com

Tags: Bunuel in the Labyrinth of the Turtles, GKIDS, Luis Bunuel, Shout! Factory