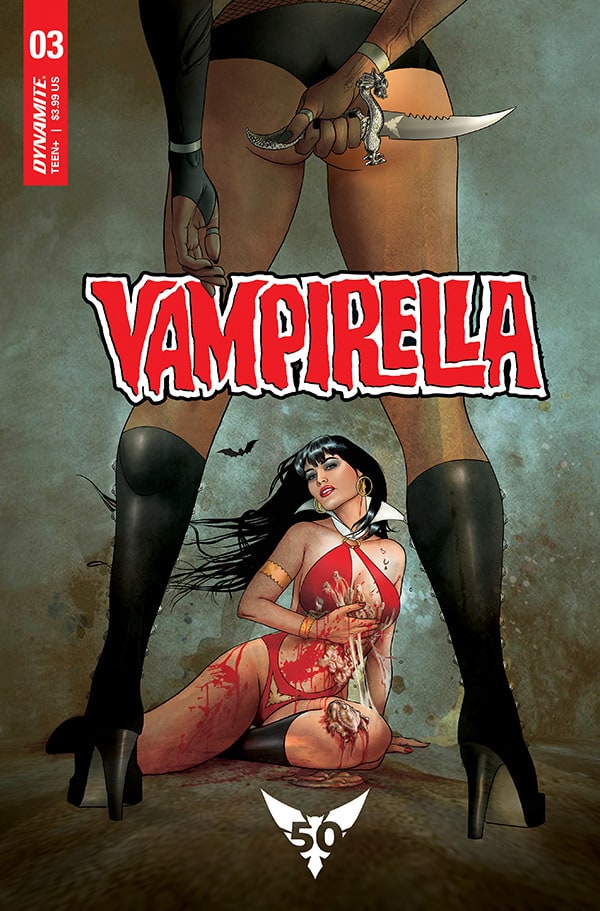 Vampirella #3 – As a complete newbie to the world of Vampirella, I appreciate how writer Priest is reintroducing the alien vampire’s world and origin, while also building a larger story, all shown through our sitting in on a conversation between Vampirella and her skeptical therapist.  Now Lilith, Vampirella’s mother, has entered the mix, and things begin to get even more layered, just as every Priest comic does.

Black Hammer: Age of Doom #12 – I’d thought that this book might be going on hiatus for a while, but with this issue, it feels like maybe things have come to an end, at least for the parent title (there is talk of a new miniseries being announced soon, and of course the BH/JL title currently running).  Jeff Lemire and Dean Ormston did some pretty remarkable things with this series – introducing a group of very familiar yet strikingly original heroes who have been trapped in a small town for years. As they started to figure out what has really happened to them, this world expanded, and drew from other comic book staples, but always put character first, and made the familiar new.  This is the most effective Lemire’s ever been at writing a superhero comic, and Dean Ormston was the perfect collaborator for him. 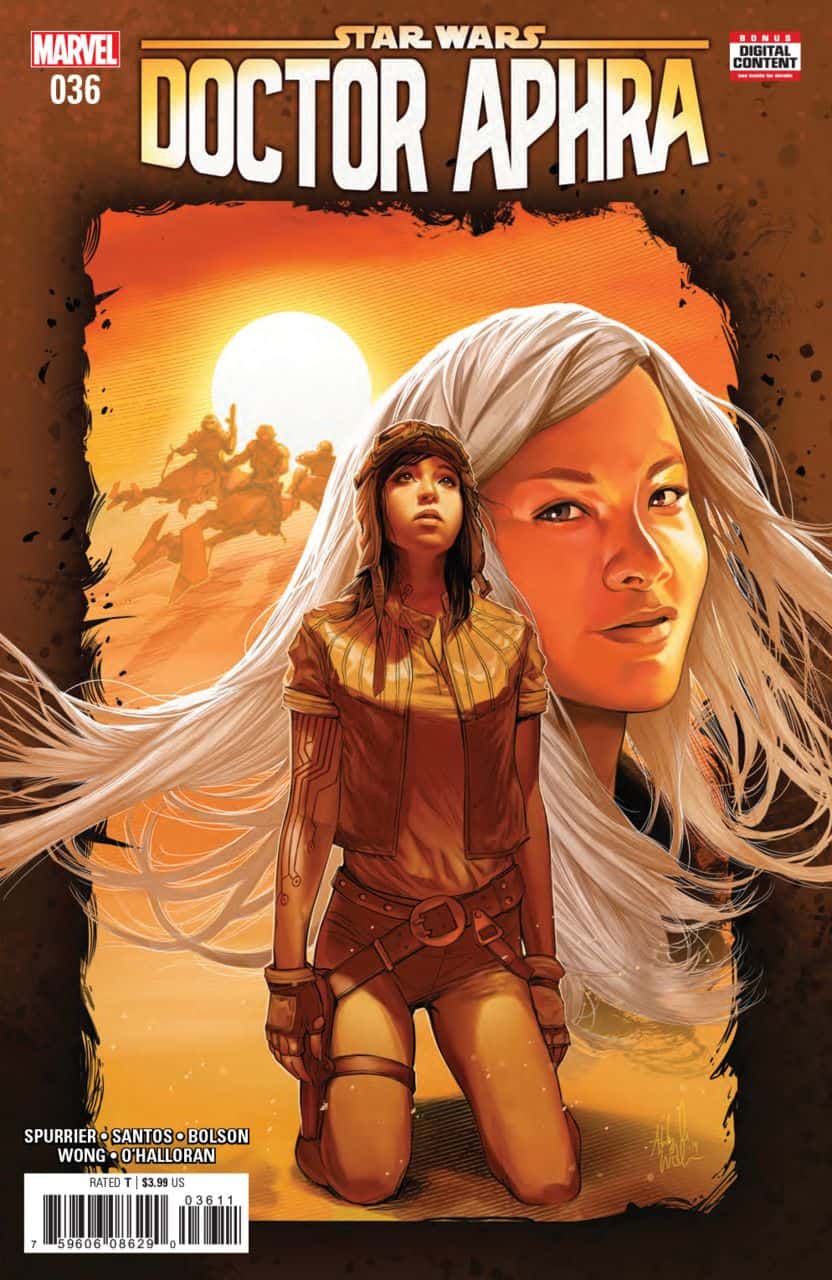 Doctor Aphra #36 – For a little while now, Aphra has been subject to the machinations of Minister Pitina Voor, who is in charge of the Empire’s propaganda ministry.  This issue has Voor’s plans laid bare, as well as shows us the depths to which she feels she understands Aphra and her motivations. But, Aphra is always Aphra, and she always has a few cards up her sleeve.  This is an excellent issue, with some very nice art by Wilton Santos and/or Cris Bolson (I’m not sure who did what). Simon Spurrier has really run with Aphra, and I remain surprised that I’ve not ever wished Kieron Gillen was still on the book.

Excellence #5 – Spencer is making his move on the Aegis, and his father breaks even more rules in order to try to stop and protect him, engaging a female mage to tail him.  The thing is, women are not allowed to use magic in this world, and the hypocrisy of Raymond’s actions are not lost on Spencer. This series, by Brandon Thomas and Khary Randolph, is very impressive, and keeps becoming more so with each issue.

Guardians of the Galaxy #9 – Star-Lord is having a hard time resisting the Universal Church of Truth, which is somehow under his father’s control, and wants to depopulate a couple of continents on Earth so it can go to the future and kill Death.  Meanwhile, Rocket takes the few free Guardians to get some unlikely help. It’s another pretty solid issue.

House of X #5 – I’d suspected that something ground shaking would happen in this issue, and as it turns out, there are two big moments or revelations.  We learn just how all of the characters that Matthew Rosenberg came back, and weirdly, it involves Goldballs, but also has huge implications for the future of X-Men comics if it stands.  Also, we see how Apocalypse and many other “villains” are reacting to the work that Xavier and Magneto are doing on Krakoa. There are a few things in this issue that I don’t think I like (especially the weird naked church thing that Storm presides over for a few pages), at least on the surface, but I’ve learned to trust that Hickman’s plan for these books is solid.  At the same time, there are only three issues left, and I’m still not entirely sure as to the shape and scope of this story. I’m glad that Hickman intends to stick around for a while when the Rebirth series launch, because his ideas here need to be explored, and I don’t trust Marvel’s cycle of relaunch and editorial interference to let these stories breathe, without him there to shape things.

Killers #3 – We meet another former Ninja as the others start pairing up to go after the Jonin’s objective.  This series is fun, but as only one of the main characters is established, it feels a little generic in places.

Once & Future #2 – I’m a little disappointed by how predictable this latest series by Kieron Gillen has been.  It’s entertaining and amusing, with some cool moments tossed here and there, but it’s just not grabbing me. Some militia or something is working to resurrect King Arthur, while a very old lady leads her grandson to try to stop them.  There’s comedic potential here, but I can’t escape the feeling the Warren Ellis’s last arc of Injection had a very similar tone to it, and that I’ve read all of this before. I’m going to stick with it, but I’m waiting for Gillen to do something that turns the book on its ears.

Psi-Lords #4 – Things are finally made clear with this issue, as Scion’s gameplan is revealed, and we learn the truth of our heroes’ mission and the source of their powers.  There’s a lot of cosmic weirdness mixed with pop culture references that sound odd coming from the mouths of amnesiacs, but it’s an entertaining issue. I still don’t like the Clayton Crainesque style that Renato Guedes is using on this book; it’s a little too stiff.

Superman #15 – This issue has our first longer look at the new Legion of Super-Heroes, and I remain cautiously excited about it.  They’ve come to watch the formation of the United Planets, but have arrived a bit early, which is a little awkward. The rest of the issue looks like it wraps up a number of longer-running plotlines.  I’ve not read any of Brian Michael Bendis’s Superman before the last issue, and I don’t really understand a lot due to lack of prior knowledge, but it feels pretty acceptable so far as Superman comics go (although it’s a little arrogant that Supes decides he can represent Earth in a multi-planet governmental organization).  I doubt the UN was formed in an afternoon without any real negotiation. Artwise, this stuff is pretty house style DC dull.

Valkyrie Jane Foster #3 – Valkyrie takes the recently dead Heimdall to the place he’s selected as his final resting place, but to get there they have to run a strange gauntlet of threats.  This is my least favourite issue of this series so far, because there’s not a lot of focus on Jane, but in the end she gets a talking horse, so I guess that’s a win? I’m actually not convinced I’m going to stick with this book now; I hope the next issue is more like the first one.

Black Panther and the Agents of Wakanda #1