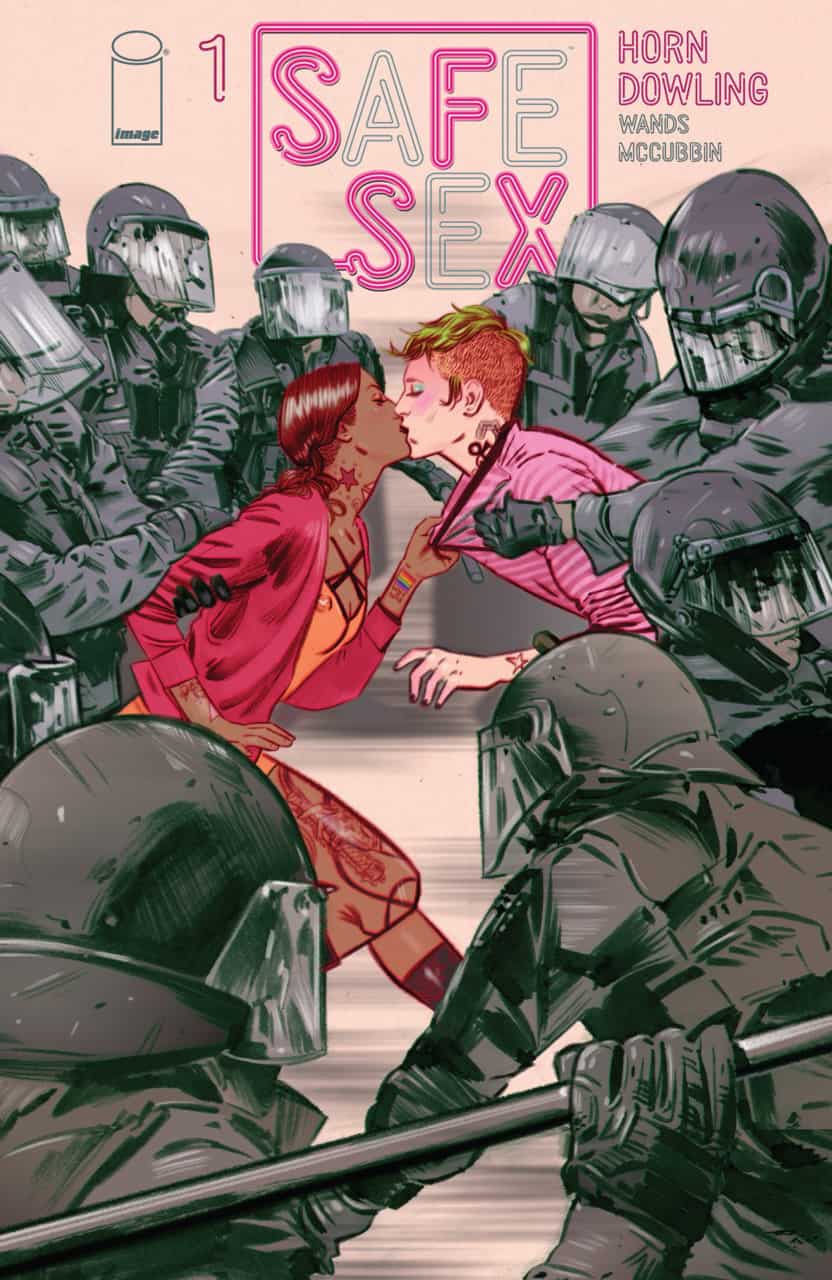 SFSX #1 – Tina Horn and Michael Dowling provide us with a very impressive first issue to their new series this week.  A little ways into the future, a religious organization has taken over San Francisco, and their way of solving issues of toxic masculinity has been to sanitize the city, the media, and peoples’ sex lives so that unrealistic expectations have been taken away.  Of course, the best way to do that is to heavily regulate sex and femininity, and to market it as the truest form of feminism to ever come along. It’s not sitting well with Avery, a former sex worker who is doing her best to live life on the straight and narrow, even though she struggles to conform and adopt the expected standards being crammed down her throat.  She’s largely making the effort for her husband, who hopes that they will be able to save up enough to leave the city. When her husband sees something he isn’t supposed to at work, and is arrested for it, Avery has no choice but to go on the run. This first issue provides a good overview of life in this society, and the stark contrast between Avery’s days of having public sex at The Dirty Mind to completely falling out with her former friends, who are now the only people she can turn to for help.  I’m excited to see where this goes, and like the way this book echoes the much-missed Bitch Planet, but is moving completely in its own direction. 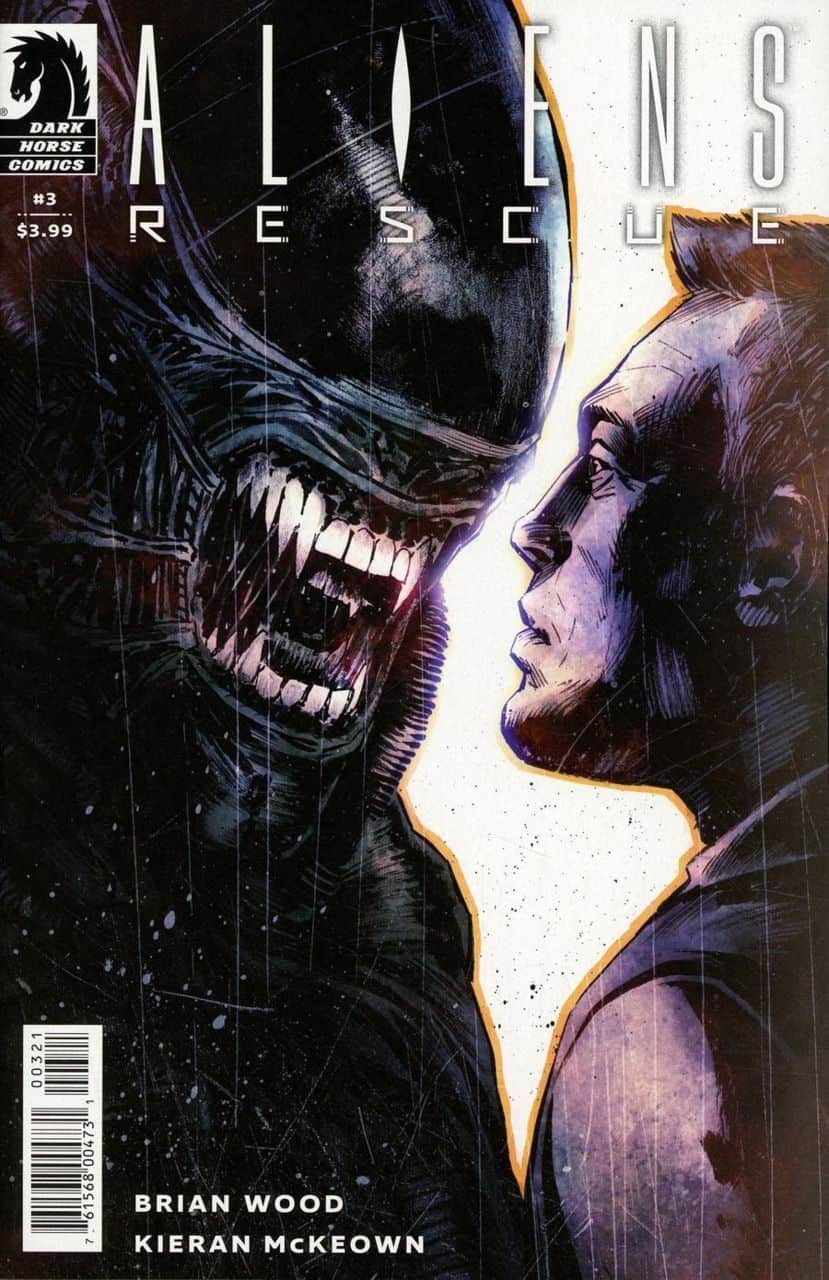 Aliens: Rescue #3 – Since the last issue of this series came out, there’s been some talk in the comics press about writer Brian Wood’s behaviour, and accusations made that he has been inappropriate with women.  It’s led, apparently, to the cancellation of his next Aliens series, although it’s still being solicited in the Previews that came out this week. Wood’s star has been setting for a while now, as he’s gone from writing some of the most respected indie comics in the business (Local, Demo) and a number of high profile Vertigo books, to working almost exclusively with licensed comics.  It’s been his name that has had me checking out these Aliens series, and while they’ve been fine, they haven’t been terribly impressive. I’m hesitant to judge the guy based on some stuff I’ve read online, but at the same time, I believe these women’s stories, and feel like maybe Wood needs to go away for a while. This comic is fine, but it feels like it’s building towards the next miniseries, that we’ll probably never get to read.

Black Panther #16 – All of the threads of Ta-Nehisi Coates’s two Panther runs are coming together now, as T’Challa is back on Earth, with his new friends from across the galaxy.  The problem is that Emperor N’Jadaka has come too, and his symbiote has targeted some characters from Coates’s first arc to work with him. This is a good issue, although I’m not sure I’m following some of the intricacies of the plot with respect to the Djalia, and what that implies for Shuri.  Since the Panther movie came out, it feels like Marvel can’t decide what to do with her character… 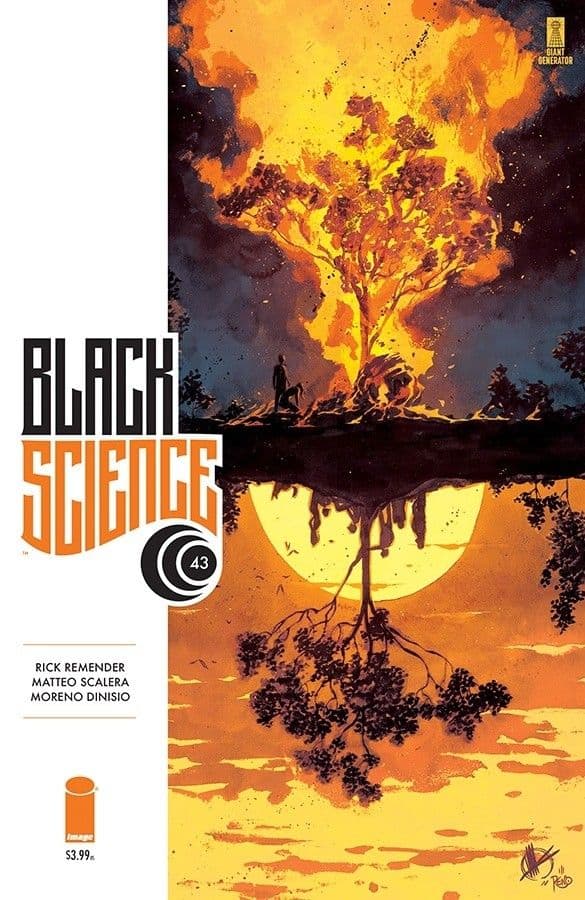 Black Science #43 – Rick Remender and Matteo Scalera bring their epic series to a close with this issue, and I’m not entirely sure how I feel about this conclusion.  The issue is exciting, as Grant tries to lead his family away from Khadir’s anger, but because it’s Grant, things get a little messed up along the way. This title, which started as a kinetic ride, slowed down and became much more about family as it progressed.  I always liked it, but sometimes felt like it ran a little too long, or switched streams a little too much. That said, the characters in this book have been great, and Scalera’s artwork stayed exciting, even when depicting a family picnic. The title raised some interesting questions about the nature of parallel universes, and the way in which every decision could lead to an infinite branching off, but never strayed far from Grant, who was always a flawed and complex character.  I’m always down to check out Remender’s next project, but I think I’m most excited to see what Scalera has coming up, as his work really grew on me, and I’d like to see him do something different now.

Captain America #14 – I think that my favourite thing about Ta-Nehisi Coates’s Captain America run is the prominence it is giving to characters that are often overlooked.  The White Tiger and Echo both play large roles in this issue, as Cap (in his Super Soldier outfit) and they attack the Watchdog base to try to free some migrants that are being trafficked.  It’s a solid action issue that provides the link to the earlier arcs of this run. It’s decent stuff. 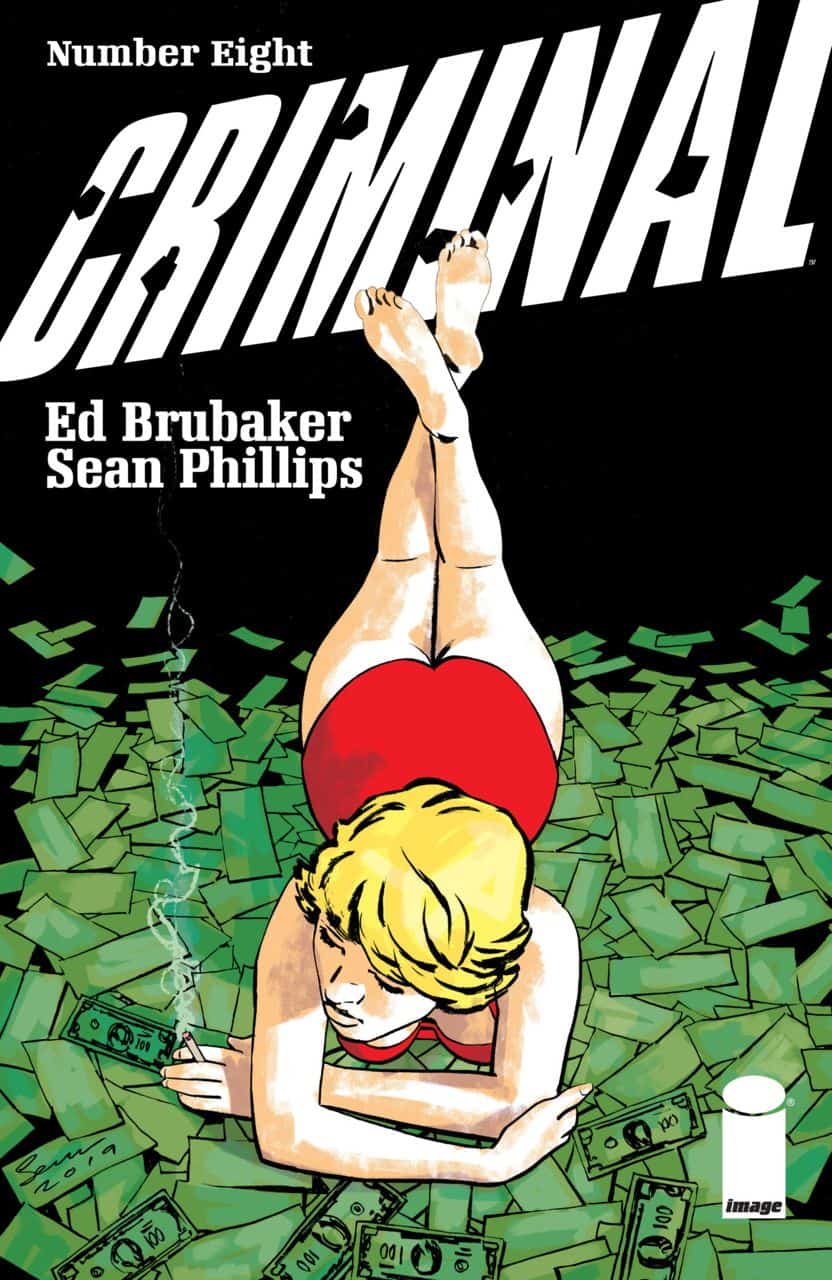 Criminal #8 – Jane gets the spotlight treatment for this latest issue.  Her and Teeg’s plans to pull off a big job are going well, but she can’t escape the feeling that something is going to go wrong.  Some digging leads her to suspect that Ricky might become a problem, but she takes a different approach to solving it. She finds him about to kill the junkie from the last issue, and quickly intuits why.  Ed Brubaker and Sean Phillips aren’t hiding from the darker aspects of this story, and I love the way the focus shifts for each issue of this arc, giving us pieces of the story and allowing us to piece it all together.  As always, this is a masterful comic.

Deadly Class #40 – Master Lin knows that Saya’s alive, which can’t be good for her or her friends, while Helmut decides to go after Petra’s father as a way of honoring her memory, but has no clue what he’s getting himself into.  This book is spreading out a lot lately, and I’m not always sure that’s a good thing. Marcus isn’t even in this issue, which feels odd. Still, this book is gorgeous thanks to Wes Craig, and I love the way Rick Remender has built these characters, so I’m still quite happy with it.

New Mutants: War Children #1 – I often find myself suckered into buying these 80th anniversary one-shots, and then regretting it.  Chris Claremont and Bill Sienkiewicz’s New Mutants run contributed to my understanding of the potential of comics (see my retro review column about it here), and influenced my tastes for decades, but you can’t really go home again.  This one-off, set around the time of that run, basically retreads some of the work these creators have already done, and done better.  Warlock is scared of how the coming battle with his father will affect his friends, so he ends up infecting them with his techno-organic virus, and it acts differently on Magik’s Darkchilde self.  Karma is weirdly still with the team, but so is Warlock, so it can’t actually fit anywhere in continuity, and Claremont’s approach to writing has not held up well. Sienkiewicz’s art looks very nice, but doesn’t have the sense of abandon his earlier work did.  I came away from this disappointed, and knowing that I should have expected that.

Powers of X #5 – There are only two issues remaining in Jonathan Hickman’s two X-Men miniseries, and in some ways, I’m still not too clear on what to expect with either.  This comic, the penultimate issue of Powers of X has Xavier and Forge talking about the ultimate purpose (and storage requirements) of Cerebro, and then has Charles and Magneto approaching Emma Frost to involve her in their plans for Krakoa.  These sections work for me, although I’m wondering why Year One Forge looks more like his more popular 90s version than his earliest self, but the last section, which takes place far into the future and involves the Phalanx still escapes me. Hickman’s work on massive machine consciousnesses in this series doesn’t yet line up with what’s going on in more current timeframes, and I assume the connection comes from Cerebro’s true purposes.  The problem is, I haven’t really been able to care about that stuff, and am so much more interested in the politics and implications of Krakoa. I love Namor’s appearance in this issue, and the ways in which ground is laid for the upcoming Marauders series. With only two weeks to go, I’m as interested and perplexed with Hickman’s X-Plans as I was on day one.

Star Wars: Target Vader #3 – With each issue, I find myself liking this series more and more.  Robbie Thompson has gathered a group of bounty hunters around Beilert Valance, and tasked them with killing Darth Vader.  Valance, being a particularly ornery type, has a suitably complicated and bold plan in place, and it seems to be going in his favour. I like the character work that Thompson’s done here, and am curious about the hunter who is posing as a Tusken Raider, but who Valance knows isn’t.  Stefano Landini draws a mean Vader, and makes this book look great.

The White Trees: A Blacksand Tale #2 – This short series by Chip Zdarsky and Kris Anka comes to a close, as the three warriors infiltrate enemy land looking for their kidnapped children, only to find some treachery has been going on.  Zdarsky built these characters, and Anka built this world, in a very short amount of space, but they made it compelling, and leave me wanting to know more. This was a good title, and would make a good movie. 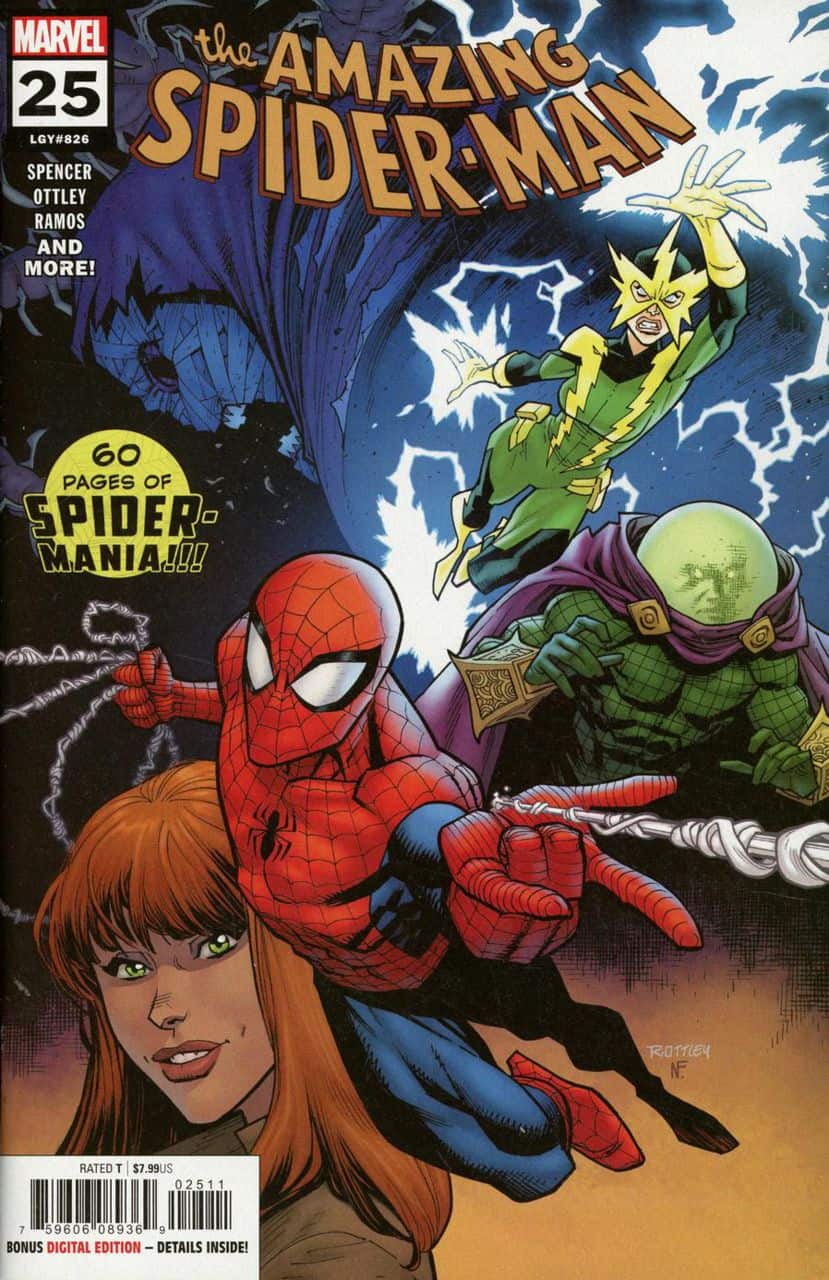 Amazing Spider-Man #17-25, #18.HU, 19.HU, & 20.HU – These twelve comics contain a lot of story, encompassing the Hunted arc, it’s lengthy epilogue, and the oversized issue twenty-five.  Nick Spencer is definitely making Spider-Man interesting again, even if Hunted is way too dependent on the excellent Kraven’s Last Hunt story from my childhood. Spencer wisely builds up some of Spidey’s rogues, making the Lizard and the Vulture more interesting than they’ve ever been.  At the same time, this sprawling story could have been a little tighter and shorter. I love the art that Ryan Ottley is providing; after so many years of reading his Invincible, it’s cool seeing him do something different, but also so familiar. Much of Humberto Ramos’s work, in contrast, looks rushed, and the less said about Gerardo Sandoval’s issues, the better.

Batman #76 – City of Bane feels like a real culmination of things for Tom King, but at the same time, is a little dull.  I’m not a big fan of Tony Daniel’s artwork, and as with the rest of King’s run, it’s the artist who really determines how effective an issue is.

Chapterhouse Comics Summer Special 2016 – This has been sitting in a pile for more than a while now, and reading it after the apparent implosion of Chapterhouse Comics (how long has it been since they’ve released a book), it serves as an object lesson in rapid expansion in an era where we thought everyone already knew better.  The only thing here I really liked is the team-up story featuring the Pitiful Human-Lizard and Captain Canuck. I’m always down for more PH-L, even if Jason Loo had to work with a co-writer, making this the least charming PH-L story I’ve read. I also found the preview pages for The Fourth Planet to be interesting – I wonder if that series was ever actually collected, or finished.  The rest of this stuff did nothing for me, which is my usual reaction to Captain Canuck.