Well, as of October 2, 2019, Finn Balor has returned to NXT and is the NXT Championship hunt with the Undisputed Era’s Adam Cole. 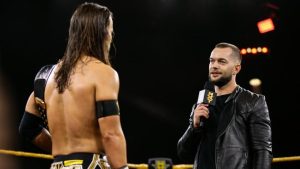 It’s not a short term deal as Balor has his own new short now!

Plus, WWE 205 Live is now under the NXT umbrella just like NXT UK with the WWE Cruiserweight now the NXT Cruiserweight Championship.

First defence on the new era is next week.