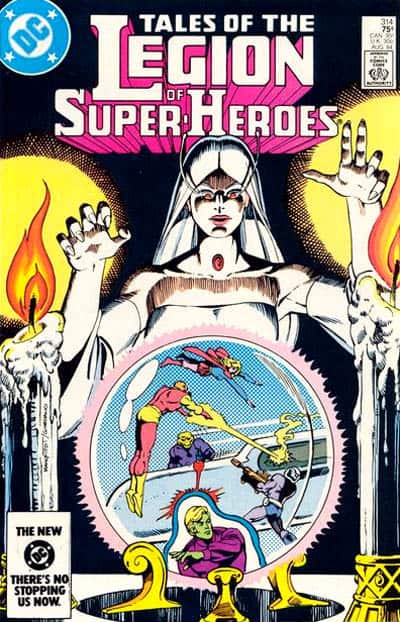 As a kid, I never knew there were new stories in this book.  I started reading the Legion after this was cancelled, and had only ever picked up one issue of this book, which was a reprint of something I’d already read.  As such, I’m reading this first year’s worth for the first time, in the context of the Levitz/Giffen run, and the ongoing baxter title. Just from flipping through these comics, it’s clear that these were considered secondary, but there are just so many characters in this world that more space could only benefit them.

I can understand why DC chose to run a second LSH title at this time, especially given the title’s popularity (having a third of the sales in today’s market would guarantee at least five Legion team and/or solo titles).  That said, the quality of this series was all over the place during this year, as the book moved from a carefully interwoven extension of the main title to feeling largely like it was a storehouse for inventory stories.

Having the extra space gave this title room to dig into and develop under-used characters like the White Witch and Invisible Kid, but its success was closely tied to how involved Paul Levitz was in the writing and planning of the issues.  Mindy Newell came along about halfway through to provide dialogue, and that’s when my enjoyment of the book started to tank some. Her dialogue was often stiff or felt very dated (always a problem when a book is set in the future, yet sounds off-kilter in the present).  When Newell took over for the Dawnstar/Brainiac 5 story, things got a lot more confusing, and the story just plain didn’t work for me at all. I still don’t understand what Dawnstar saw in Jhodan…

There are some plotlines that aren’t resolved here, such as what was causing the geologic and weather events on Jhodan’s world, but I imagine that many will be resolved in future issues of the main title (if not that particular example).

Art-wise, this book was perfectly fine, without being impressive.  Terry Shoemaker is an undersung artist, often showing up in titles that I’m writing these columns for.  Dan Jurgens is not a favourite of mine, but his earlier work is preferable to his later work for me.

The Legion of Super-Heroes Annual featuring Saturn Girl giving birth is an odd stand-out, in that it probably should have the ‘Tales of’ logo on it.  The ending of that issue, with the revelation that the Ranzz’s secret twin was turned into Validus by Darkseid, is one of the darkest moments I’ve ever seen in comics, and it’s amazing that it’s not addressed for the rest of the year.  I think that one of the biggest losses of this title was that Keith Giffen stepped away from the Legion for a while; the bleakness of that plot point feels like something he’d come up with. That’s why it was so nice to see him return for the Substitutes special, which feels like a preview of the humour that made his Justice League run so unique.

I am going to have my first column on the deluxe format title soon, and that will go into more depth with regards to specific characters’ developments, as I’m having a hard time separating the two books in my mind at the moment, and because the most important things happened there.

The only one of these books to be collected is the Annual, which can be found here:

The Legion of Super-Heroes – The Curse Deluxe Edition