Once upon a time in in 1981, America got to see what happens when their most celebrated scream queen went to the Land Down Under. Road Games has Stacy Keach (Cheech & Chong’s Up in Smoke) is a long haul truck in Australia whose route happens to match a killer that’s slicing up hitchhikers along the highway. Is it really him? Jaimie Lee Curtis (Halloween) doesn’t care too much since she’s the wayward daughter of an American diplomat hitching a ride to enjoy the Australia that isn’t part of a package tour. The film has grown in cult status over the decades as a fine piece of Ozploitation. Director Richard Franklin had gotten his name with Patrick. Now he had two notable stars and that long rugged highway that cut across his country. Here’s the press release from Scream Factory along with the huge amount of bonus features: 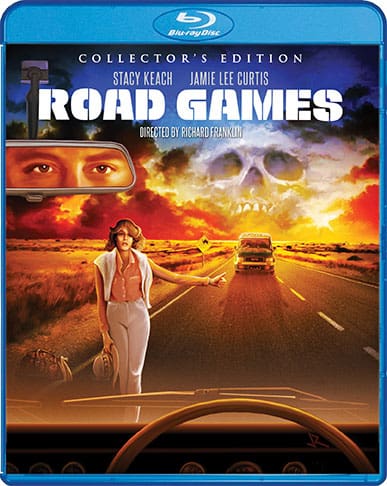 Stacy Keach is Pat Quid, a lone trucker who plays games to keep his sanity on long hauls through the desolate Australian Outback. Jamie Lee Curtis is a free-spirited hitchhiker looking for excitement with a game of her own. And somewhere up ahead is a maniac in a van whose game may be butchering young women along the highway. But when the killer decides to raise the stakes, Quid’s game becomes personal … and the rules of this road are about to take some very deadly turns.

Director Richard Franklin (Psycho II) packs plenty of Hitchcock-like twists and suspense into this sly shocker that was nominated for four Australian Film Institute Awards and remains one of the most surprising thrillers of the ’80s.