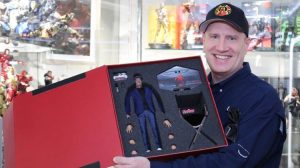 A major structural shift is taking place at Marvel. As the brand looks to put even more of its stamp on The Walt Disney Company with the upcoming launch of Disney +, all of Marvel’s creative personnel is moving under Marvel Studios President Kevin Feige. Deadline hears that Feige is adding the title of Chief Creative Officer, Marvel, to his title. What that means for the brand is that all the company’s key creative executives across film and TV will now report to him, sources said. Already master of the Marvel Cinematic Universe, Feige’s oversight will extend to the overall creative direction of Marvel’s storytelling and content creation platforms. As part of this, Marvel TV and animation generator Marvel Family Entertainment will move under Feige’s Marvel Studios banner.

I’ve heard this move is being finalized this week, and it makes strong sense that Feige would extend his oversight even further than it stretches now. He was a major presence at Investor Day, when Disney launched its OTT streamer Disney + plans and Feige mapped out Marvel’s series contributions to the service that includes The Falcon and Winter Soldier, Loki, She-Hulk, Moon Knight, Hawkeye, What If? and WandaVision. He was also the front man for Marvel’s upcoming product at D23 and San Diego Comic-Con.

Feige continues to report to Walt Disney Co-Chairman and Chief Creative Officer Alan Horn and Co-Chairman Alan Bergman. The decision to place all film and television production and the creative aspects of publishing under Feige comes at an important inflection point for the company: Marvel is moving into a second phase of its superhero film franchise launches, after an unprecedented record of success in its first decade. And the move comes as efforts to generate Marvel TV series for other platforms has wound down but will soon begin a new phase as Marvel creates premium content for Disney +.

Here is how the reporting structure will line up right under Feige: Dan Buckley will continue as President of Marvel Entertainment, where Ike Perlmutter remains Chairman. Long a creative collaborator for Feige in publishing and television, Buckley will have a dual reporting structure going forward, Deadline hears. He will continue to oversee publishing creative/editorial and in that capacity he will now report to Feige. Buckley is also responsible for publishing operations, sales, creative services, games, licensing and events. There, he will report to Perlmutter. It is expected that Joe Quesada will remain a creative lead for of Marvel Entertainment, reporting to Buckley. It is expected that all the creative execs in publishing will report to Buckley.

This streamlining of reporting structure at Marvel comes as Feige’s importance to the superhero factory got underscored several times this year. That included a summer-long standoff between Disney and Sony Pictures over his services as producer and major creative influence on Spider-Man, after Far From Home became Sony’s highest grossing film of all time at $1.13 billion. A truce was recently drawn that makes Disney a 25% co-financier and gives the studio a corresponding profit share for one movie. It also puts Spider-Man in one more separate Marvel movie, continuing the strategy that helped establish Tom Holland’s wall crawler in Captain America: Civil War before Spider-Man: Homecoming and bolstered his appeal with appearances in the two Avengers films directed by Joe and Anthony Russo.

On the film front, Feige capped a first decade that saw myriad superhero franchise launches without a single misfire, helped by that cross pollination strategy. Those films had a collective global gross of $26.8 billion. This year, Feige produced all-time box office champ Avengers: Endgame, and two other billion dollar global grossers in Captain Marvel and Spider-Man: Far From Home. That on the heels of Black Panther becoming Marvel’s first Best Picture Oscar nominee, after grossing $1.3 billion. Feige separately was just set to produce and develop a Star Wars film under Lucasfilm’s Kathy Kennedy.

In addition, CB further reports that “Marvel’s former Chief Creative Officer, Joe Quesada, is now the EVP, Creative Director for the company. He will still be a creative lead for Marvel Entertainment and reports to Buckley. Additionally, Marvel’s Head of TV Jeph Loeb no longer reports to Dan Buckley, and instead reports to Kevin Feige.”

So, Fiege’s Marvel fiefdom includes the comics too creatively. Interesting,

Rose: A Love Story gives a scary love in February