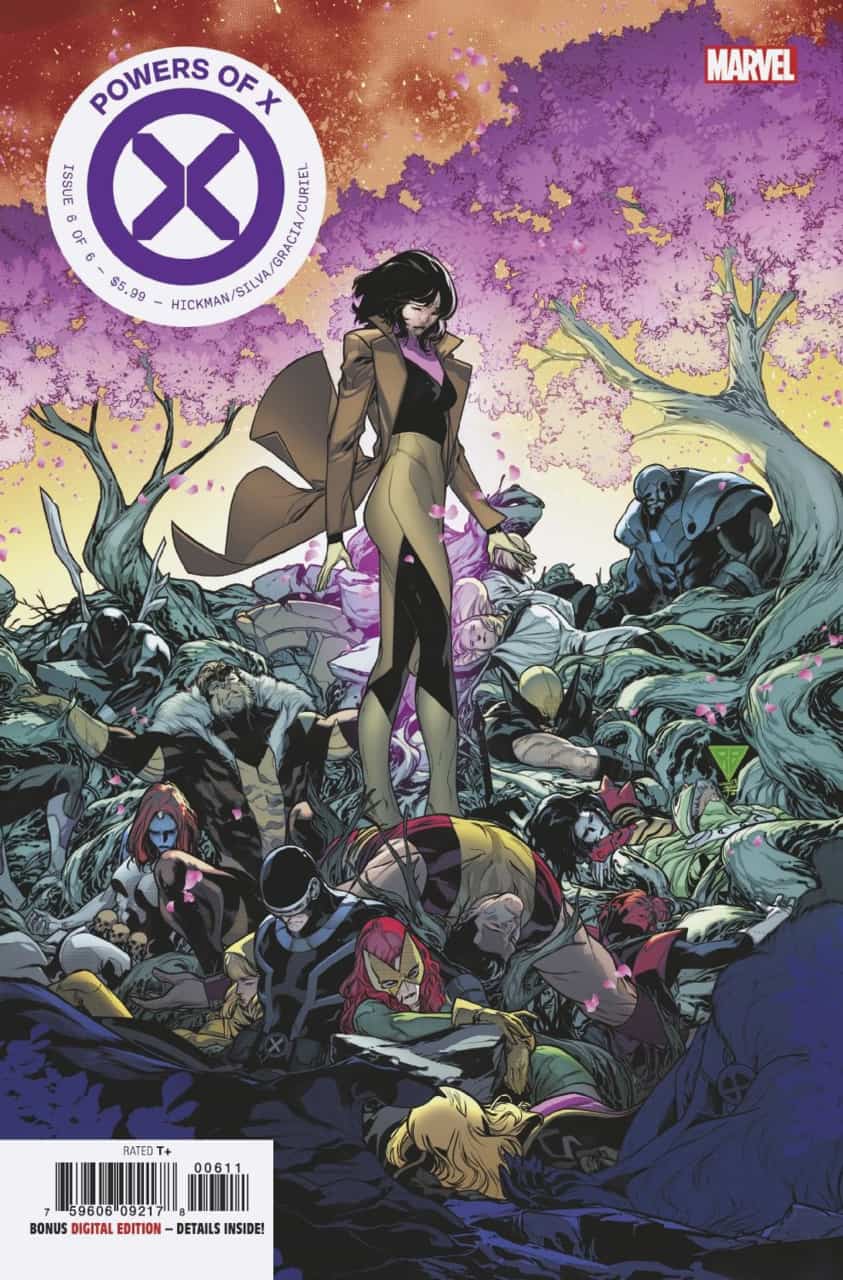 Powers of X #6 – A few things are made more clear in this final issue of Jonathan Hickman’s two introductory X-Men miniseries, but I’m still left wondering about a number of things.  I don’t want to spoil much, but it’s interesting to see just how Moira is portrayed in this book, as her role in the current Marvel Universe is clarified, and the stage is set for the six new X-Men comics (of which only one has the name X-Men, which is a nice change).  Hickman has laid some new ground, and things look very interesting, if also perhaps a little puzzling, seeing as I’m not sure who or what the X-Men and their ancillary teams have to face off against, given that most of their biggest enemies are now their neighbours. It is my hope that the new titles take a little more time for character work, as HoX and PoX have been very much about the big picture.  It’s an exciting and different time to be an X-Fan, and I don’t see that changing anytime too soon, at least for as long as Hickman is on the book. 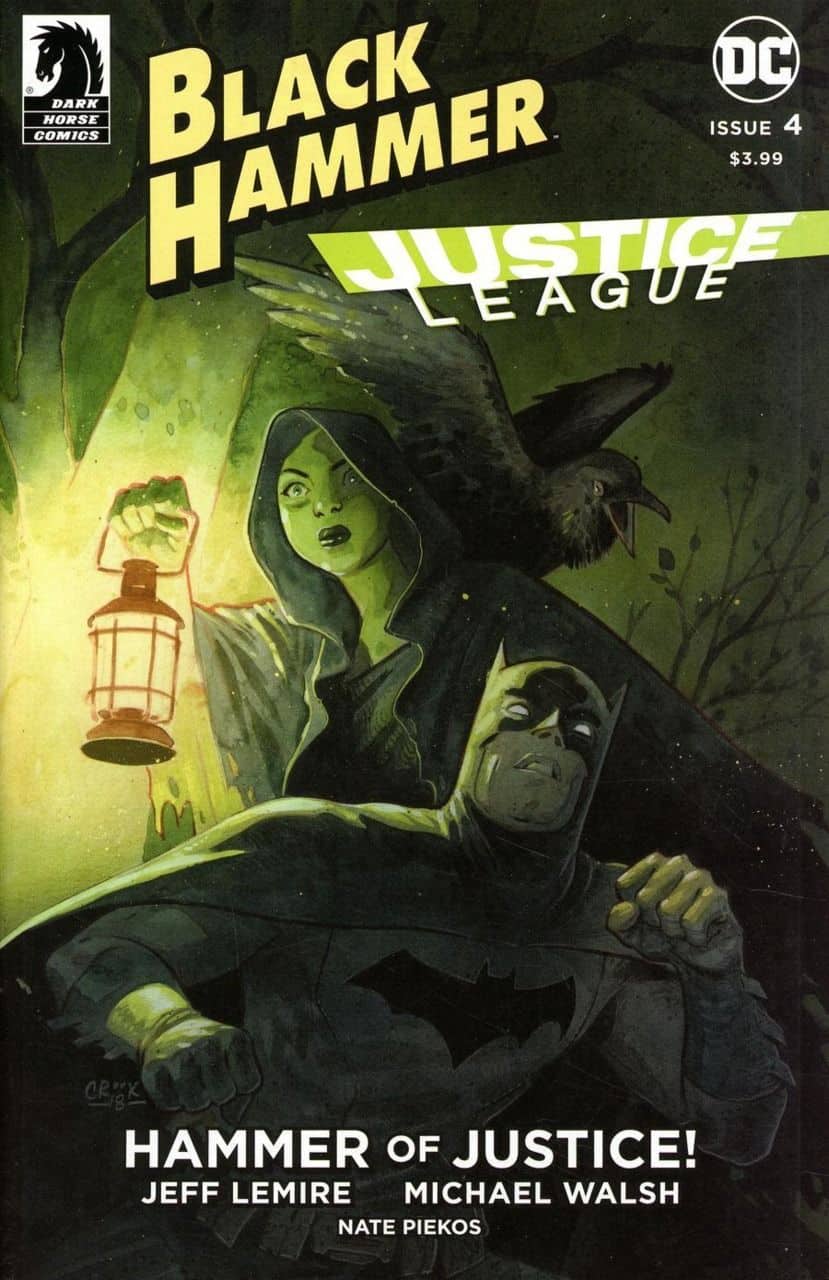 Black Hammer/Justice League: Hammer of Justice #4 – The not-so-unexpected figure behind the cross-world shenanigans is revealed, as various factions of heroes from the two worlds fight or work together to try to figure out what’s going on.  Jeff Lemire’s writing is making this series a fun read, especially for people who are familiar with the Black Hammer world, and Michael Walsh is a great artistic choice. I was happy to see the Spectre show up – is that character used much in DC comics these days?  I kind of miss him…

East of West #43 – While everyone is busy praising Jonathan Hickman for his wonderful work on Marvel’s X-Men books, I’m also hoping that he finds the time to keep writing East of West.  It’s become a rare treat to find a new issue of this series, but what a treat it is. This issue is among Nick Dragotta’s best, and the pages are just gorgeous. We are approaching the end of days, and the end of this series.  The Horsemen are ready to teach Babylon to become the Great Beast. The House of Mao engages the Confederacy in open battle, with neither side fully prepared for what the other has up their sleeve, while others sit back and watch the slaughter.  It’s a tight, beautiful issue. Here’s hoping another comes soon. 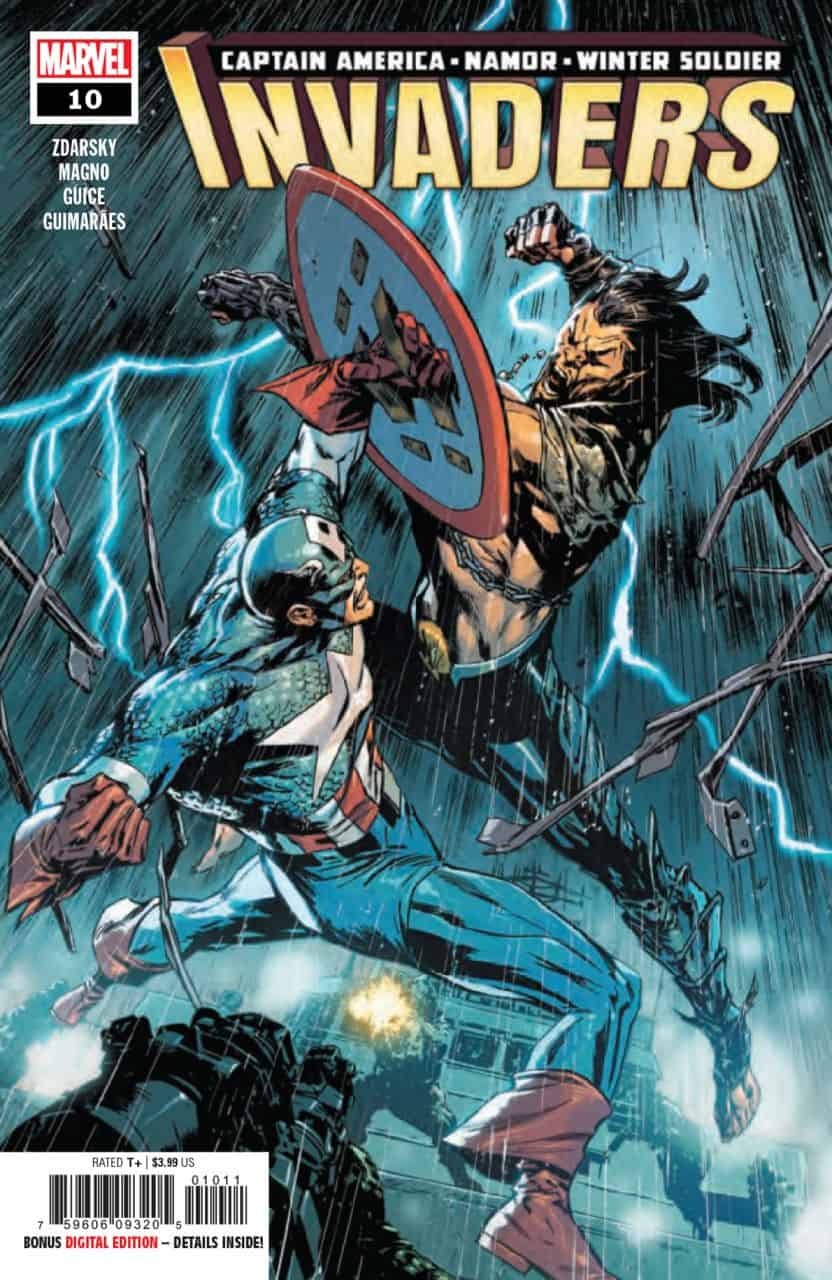 Invaders #10 – Cap’s transformation to a water breather is short lived as Roxxon messes up his and Bucky’s plans, while Namor has to face the consequences of his machinations, after the personality in his head has gotten control of the Serpent Crown.  Things are coming together quickly as Chip Zdarsky moves towards the end of this series. It’s all pretty good.

Journey to Star Wars: The Rise of Skywalker – Allegiance #1 – Marvel is busy trying to get people ready for the next Star Wars movie by giving us a weekly miniseries helping to fill in gaps between The Last Jedi and this next film.  I have no illusions that anything that comes next in this film trilogy is going to be as disappointing as the first two offerings, but I seem to find myself trapped in a bit of a codependent relationship with Star Wars – I know it’s not good, but I keep coming back.  This issue follows the familiar structure. Leia and her few remaining Resistance fighters are hiding from the First Order, and undertaking little missions to gain support or supplies, or in Leia’s case, to settle some old moral obligations. The new characters in this series (Poe, Finn, Rose, and Rey) still don’t catch my interest much, but Luke Ross’s art is nice, and side stories are usually better than the main ones.  Writer Ethan Sacks makes connections between this book and his Galaxy’s Edge mini which I haven’t read, but I like how the comics are expanding on the Star Wars universe, and I’ll get to the rest of that series eventually. I’m not sure that this needs to be weekly, but it’s whatever. 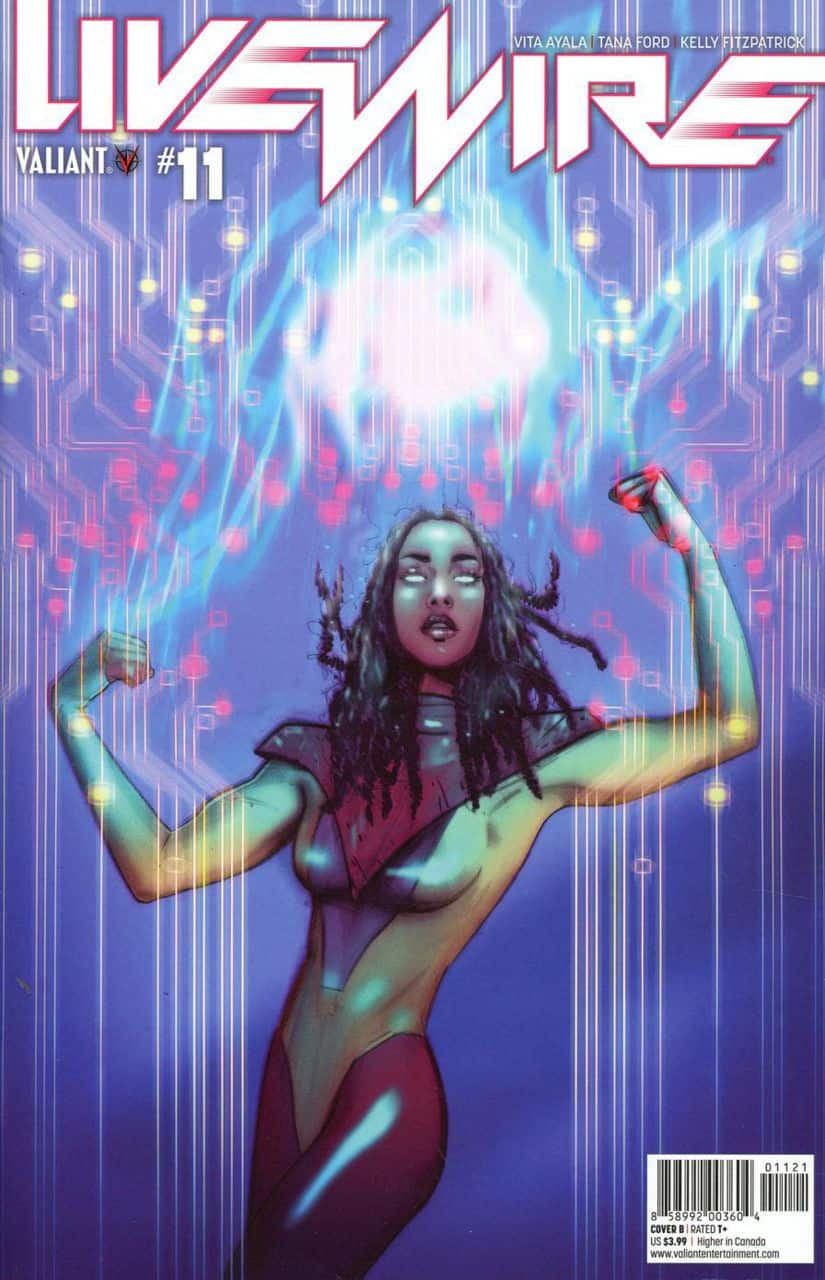 Livewire #11 – I’ve been disappointed in Vita Ayala’s run with Amanda, mostly because with each arc, it’s felt like a completely different series.  I’m very lost as to what Amanda’s powers are now – in this issue she appears to have telekinetic control over wristwatches, which makes no sense to me.  Valiant in general feels kind of lost these days.

Miles Morales: Spider-Man #11 – Ultimatum’s got a crew running a mysterious drug through Brooklyn, and Miles is determined to figure out what’s going on.  This is another solid issue in Saladin Ahmed’s very strong run. He understands how to balance Miles’s hero stuff with time spent with the supporting cast, and is steadily building some mystery into the title.  Ig Guara drew this issue, and it looks great. Miles and his friends wear clothes that make more sense in this issue.

Oblivion Song #20 – Things are looking bad in Oblivion, with the human population captured by the Faceless Ones, and starting to despair, while Nathan is stuck on Earth recovering from his wounds.  Ed works with the American military to try to find his family, but doesn’t react well to learning where they are, which might put future army support in jeopardy. It’s another solid issue in this very exciting and well-written series.

Outer Darkness #11 – Since the series began, it’s been a little unclear as to why Captain Rigg really took the mission that put him in charge of the Charon.  Now, it’s finally arrived at Sagittarius Base Alpha, meaning that Rigg is going to both learn what his mission is, and we’re going to see the beginning of his real plans, which don’t match what his bosses want him to do.  John Layman and Afu Chan have made this one of the most delightful and unpredictable books on the stands right now, and this issue helps to cement that further. It’s very well written and drawn, and full of exciting new characters and designs.  I love this title.

Shoplifters Will Be Liquidated #1 – I’ve become a fan of Patrick Kindlon’s writing through his various titles at Black Mask (which is out of business?), and was pleased when I saw that his name was showing up in Aftershock’s solicitations, as they are somewhat better at getting their books onto the stands.  This book is set almost entirely inside a superstore of the future – where aisles look like they run for miles, and where Loss Prevention consists of armed guards given the authority to arrest and assault potential shoplifters. It looks like it is set up to be a satire of our consumer culture, with the CEO of the retailer suffering a personal tragedy and heading straight to the gun aisle, while employees scurry to knock phones out of customers’ hands, but then the book takes a serious swerve at the end, which makes it more interesting.  Stefano Simeone’s art is interesting, but it’s really Kindlon’s writing which draws me to this book.

Star Wars: Target Vader #4 – My enjoyment of this title continues to grow, as Valance and his crew manage to trap Vader on a planet.  Grounding him is not the same as capturing him though, and since one of Valance’s crew is not entirely on his side, things go south pretty quickly.  This title is well written, and looks great. It’s worth checking out.

Superman #16 – I didn’t expect to come back for another issue of Superman, but as it builds towards the Legion of Super-Heroes still, and features a cameo by Saturn Girl, as well as two reunions (Superboy and Robin, and Brian Michael Bendis and David Lafuente), I figured it was a safe bet.  Bendis gets the Jon/Damian relationship, although his Damian is decidedly less prickly, as the two friends get together again before Jon heads into the future. Lafuente’s art is a little blocky and Ed McGuinnis-ish for this book (everyone has such big feet!), but he manages to pull off the emotional moments of this issue quite well.  I liked Jon a lot whenever Peter Tomai was writing him, but it feels like Bendis has a good grasp on the character as well. He writes him more like Miles Morales than Ultimate Peter Parker, which was my fear. I think that’s it for me and Bendis’s Superman though…

Batman and the Outsiders #6