As Christmas approaches, some people probably want a heartwarming film as a break from the hustle and bustle of parties and gift giving. A few of you will want a heart ripping movie instead. Luckily for those people Stephen King’s Silver Bullet: Collector’s Edition Blu-ray is coming from Scream Factory. The Master of Horror had his “Cycle of the Werewolf” novella adapted into a film starring Gary Busey and Corey Haim. There’s plenty of great bonus features. I’m looking forward to the audio commentary from Martha De Laurentiis since I once drove her around when she visited my film school. Here’s the press release from Scream Factory with the list of bonus features: 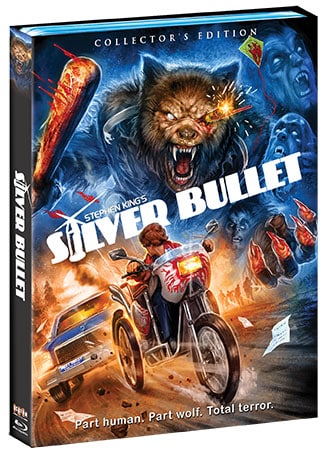 Movie Synopsis:
A peaceful town is suddenly terrorized by a maniacal killer. The townsfolk think a madman is on the loose, but a wheelchair-bound 13-year-old (Corey Haim) knows the truth … a werewolf is on the hunt. With the help of his Uncle Red (Gary Busey), young Marty Coslaw sets out to stop the half-man/half-beast before he sinks his teeth into another innocent victim. Now, time is ticking … and the full moon is about to rise.