When Dracula starring Frank Langella was being hyped in 1979, it felt a little too romantic for those of us who were into Bela Lugosi and Christopher Lee as the legendary bloodsucker. Judging from the TV spots that aired non-stop during the early summer, Frank came off as so suave. Turns out that Dracula was a suave and Langella reminds us that the Count could tempt woman with always using this ability to charm. Now the film is getting a serious upgrade when Scream Factory releases Dracula on Blu-ray. In addition to the original theatrical version, there’s also a desaturated color version that gives a more black and white feel to the film. There’s also plenty of fresh bonus features including an interview with hair stylist Colin Jamison. That film was all about Dracula going beyond the slick back look of Lugosi and Lee. Here’s the press release from Scream Factory about what to expect when this Dracula emerges from the film vault: 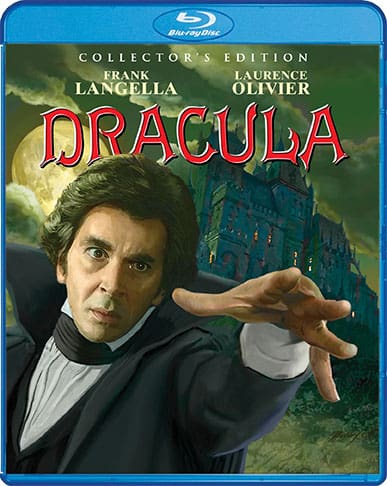 “***1/2 … an elegantly seen Dracula … all shadows and blood and vapors and Frank Langella stalking through with the grace of a cat. The film is a triumph of performance,
art direction and mood …” – Roger Ebert

Throughout history, Dracula has filled the hearts of men with fear and the hearts of women with desire. In this stylish production of Bram Stoker’s classic gothic horror tale, Frank Langella, reprises his electrifying, award-winning stage performance as the bloodthirsty Count Dracula as he goes in search of his ultimate bride. Meanwhile, the renowned and relentless vampire hunter, Professor Van Helsing (Sir Laurence Olivier), seeks to end the dark prince’s reign of terror over the citizens of Transylvania. Featuring an all-star cast, fine direction and a superbly atmospheric score by the great John Williams, Dracula is an unforgettable adaption of one of the most enduring horror legends of all time.