Sometimes a TV show has to change to fit it’s new channel. When Mystery Science Theater 3000 went from Comedy Central to SciFi (before it became SyFy), the network suits needs a few changes. They wanted the films to focus on more science fiction and horror than regular low budget films. They also demanded that the bits be a running story arc. And MST3K said, “I guess we can.” When the show was revived because of fans willing to fund it, nobody knew where it would be broadcast. Turns it was never broadcasted since it was streamed via Netflix. Instead of an episode coming out once a weekend, fans got to indulge in the entire season at once. For the second season on Netflix, Mystery Science Theater 3000 played into this new way of viewing. Instead of just punishing Jonah Heston for 2 hours with a single film, they gave him and the Bots six bad films to endure consecutively. This also allowed the bingers at home to see if they can also survive this cinematic punishment. Now all six episodes are coming to your DVD and Blu-ray player with the home video of Mystery Science Theater 3000: Season Twelve: The Gauntlet arriving just in time for your Turkey Day plans. Let’s face it, this will be the Thanksgiving you’d rather spend trapped on a spaceship forced to watch Mac & Me rather than pass the Mac & Cheese to that Uncle. Here’s the press release from Shout! Factory: 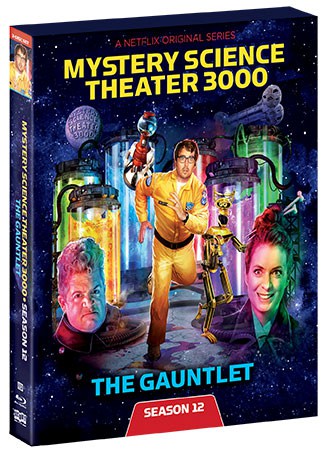 Are you prepared to face the most mind-bending act of movie riffing ever attempted? Created in the darkest recesses of Moon 13 by the maddest of Mads, Kinga Forrester (Felicia Day) and “TV’s Son Of TV’s Frank” Max (Patton Oswalt) Mystery Science Theater 3000: Season Twelve: The Gauntlet is surely the most fiendish experiment ever conducted outside of that one science fair in fourth grade where the kid who ate paste attempted to dissect the cafeteria’s meat loaf. On November 26th, 2019, fans can bring home all six 80-minute episodes of The Gauntlet season of the acclaimed series in a three-disc Blu-ray or DVD set. Fans can pre-order their copies now by visiting ShoutFactory.com.

Can Jonah Heston (Jonah Ray) and the bots – Tom Servo (Baron Vaughn), Crow (Hampton Yount), Gypsy (Rebecca Hanson) – and you! – survive sitting through six cheesy movies in a row?! Confronted with Kinga Forrester’s choices in torturous films, they band together and ward off lunacy by continuously riffing on the movies in rapid-fire succession. Jonah has an unexpected run-in with Reptilicus Metalicus, a surprise visitor breaks in to the Gizmonic Institute, a long-lost family friend arrives with some startling news, Kinga plans a diabolical new live tour on a new planet, and much, much more. Buckle up for a wild ride on The Satellite of Love, because MST3K: The Gauntlet is sure to make you laugh hard enough to create turbulence! Movies include Mac & Me, Atlantic Rim, Lords of the Deep, The Day Time Ended, Killer Fish and Ator The Fighting Eagle.

MST3K: The Gauntlet Episodes
· Experiment 1201 – Mac and Me
Jonah may have survived his run-in with Reptilicus Metalicus, but can he survive Kinga’s newest innovation – THE GAUNTLET? The experiment kicks off with an outer-space rip-off that brings the hurt.
﻿
· Experiment 1202 – Atlantic Rim
The Mads demand Jonah and the Bots attempt to deliver a catchy, viral, musical sensation during this clunky sci-fi blockbuster knock-off. Meanwhile, someone has broken into the Gizmonic Institute…

· Experiment 1203 – Lords Of The Deep
Down on Moon 13, some classified documents are discovered, and B-movie monster expert Dr. Donna St. Phibes visits with some educational materials to enrich an undersea stinker of a movie.

· Experiment 1204 – The Day Time Ended
Jonah and the Bots are halfway through Kinga’s ultimate movie riffing experiment. The deep hurting of THE GAUNTLET continues with a seemingly endless sci-fi flick while a long-lost family friend pays a visit to Kinga and Max with some startling information. And Ardy has a new pet!

· Experiment 1205 – Killer Fish
Synthia, Ardy, and Bonesy are on the hunt for the song “Idiot Control Now” and a way to play it. Meanwhile, Jonah and the Bots are forced through a disaster movie that is exactly that.

· Experiment 1206 – Ator, The Fighting Eagle
There may only be one film left in THE GAUNTLET but that hasn’t stopped Kinga from planning a diabolical new live tour on Earth! Will she finally break Jonah and his robot pals? What mysteries await on planet Mearth? How did a bear get on the SOL?! One thing’s for sure… “It stinks!”