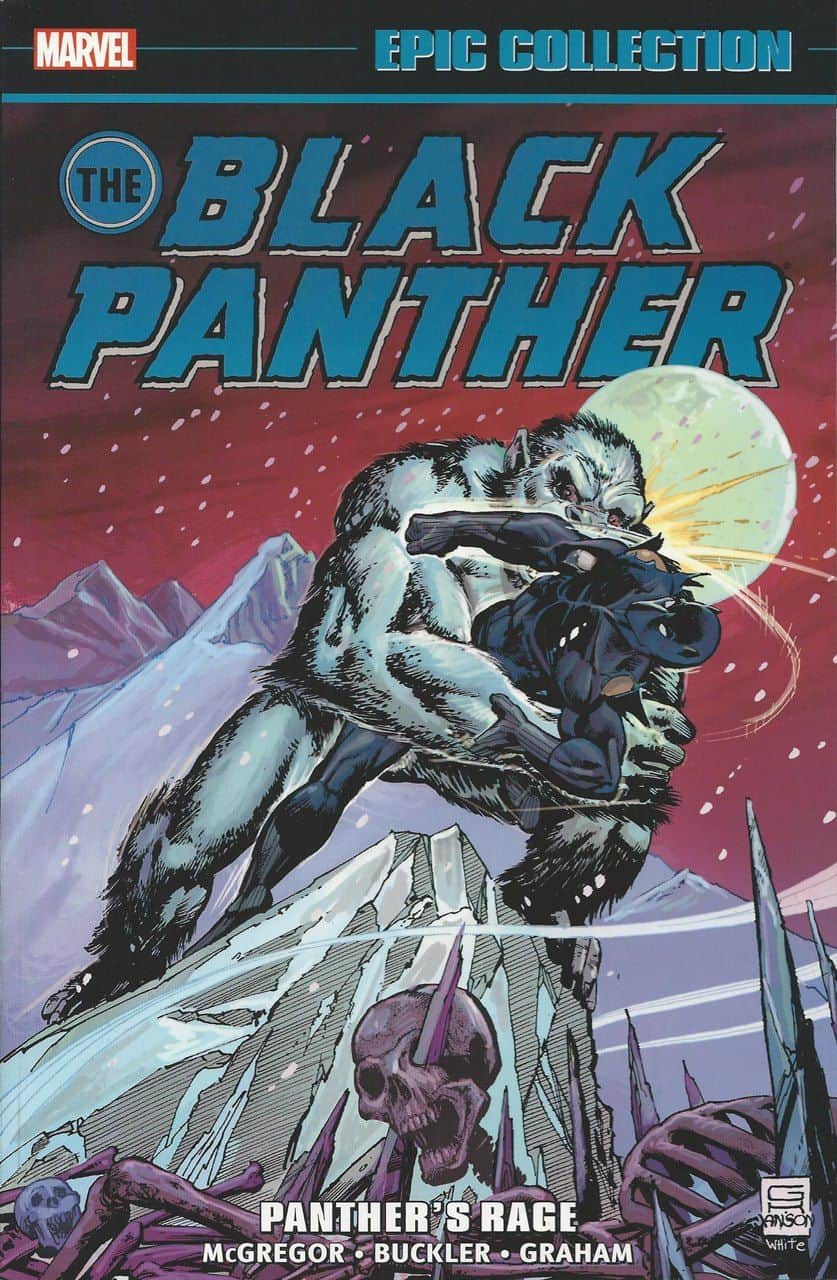 Spoilers from forty-three to fifty-three years ago

If you’ve followed my writing on this site over the years, you would know that the Black Panther is an all-time favourite character of mine, something that was solidified during the Christopher Priest run.  I’ve previously written about the Panther in these columns, but I’d never actually read the classic Don McGregor story Panther’s Rage. I did read its sequel, but didn’t fully appreciate it, lacking context.

I recently picked up the Epic Collection trade that contains the whole run, as well as the Panther’s first appearance in Fantastic Four.  I know that I’m not looking forward to the Lee/Kirby stuff, but I’m excited to see what McGregor did, and to finally read the iconic issues with Killmonger. 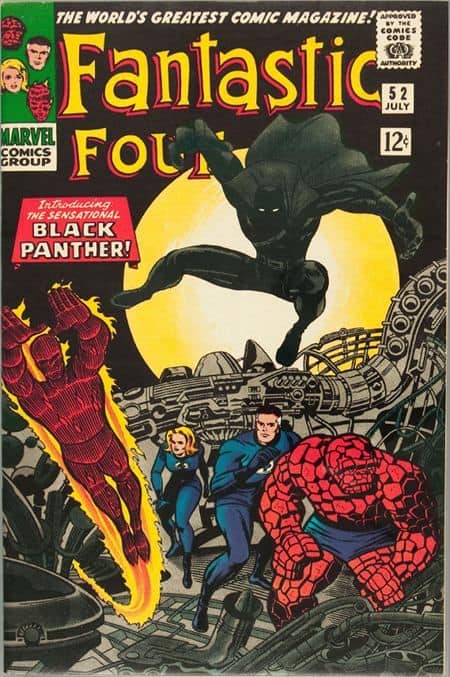 Jungle Action was canceled with issue twenty-four, as Jack Kirby had decided he wanted to write and draw a Black Panther comic, and what Kirby wanted, he got in that era.  That left McGregor’s story unfinished, although he would return with the Panther’s Prey miniseries in the early 90s, and then a serialized story in Marvel Comics Presents that I read as it came out, but cannot remember at all now.  I’m not sure if any writer ever addressed T’Challa’s complicated dealings with the Klan and the Devil’s Circle, or if Wind Eagle ever showed up again, but I also kind of don’t care.

This Epic Collection book might have been better off leaving out the Klan story, which I will come back to in a few minutes.

The opening two Fantastic Four comics I found pretty unreadable, but I’ve always felt that way about Lee and Kirby.  I appreciate the contributions they made to the art and business of comics, but don’t actually enjoy reading their work, especially Lee’s writing.  They established Wakanda as a very strange place, and that was continued with McGregor’s first storyline, Panther’s Rage.

I know that T’Challa had been knocking around the Avengers comics for a few years by this point, and that some more information about Wakanda likely dribbled out in that book (especially the issues featuring Man-Ape), but it was really McGregor that got to explore the nation, and he chose to portray it very strangely.

To begin with, T’Challa’s retinue of friends, advisors, and servants is never really introduced here.  They’re just around, and it’s a little hard to understand what role they place, especially the always angry and rebellious Zatama.  Taku’s role as communications officer is clear because he always has a gigantic walkie-talkie strapped to his back, and Tanzika is always serving food, but it’s a little harder to understand what W’Kabi is there for, other than to get angry at T’Challa because Monica’s around.  Even T’Challa as king is a little hard to swallow, as he never seems to do any monarchical things other than sit around in mesh shirts with the same small supporting class attending to him.

Monica, for the most part, is treated strangely.  Her relationship with T’Challa is not all that convincing, as there doesn’t seem to be much connection between them.  It’s unclear why she’s in Wakanda in the first place, as she doesn’t seem to be too happy to be there, nor do the people take to her easily.  Her relationship with the widow Karota is perhaps the most interesting aspect of her, but it’s abandoned when the action shifts to America, and is never given much space to begin with. 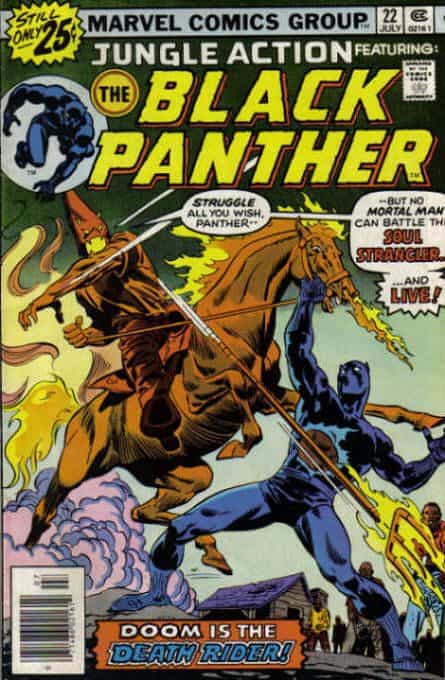 The portrayal of Wakanda in the Jungle Action comics is also kind of weird.  To begin with, it appears to be a nation of very small villages, and we see only a handful of grass huts outside of T’Challa’s massive and technologically wonderful palace.  It doesn’t make sense that people live in such poverty (the child Kantu appears malnourished and sickly) while T’Challa has a massive “techno jungle” under their feet. Nor does it make sense that the Wakandan army has access to flying vehicles working off vibranium technology while Taku carts around a massive WWI era walkie-talkie to complete his job as communications officer.

Obviously, this is a product of its time period, and was probably considered somewhat progressive when it was published, but the contrast in how the comics hold T’Challa’s reign up as a paragon of advancement and science while relying on Western notions of African inferiority is difficult to swallow.  We are given no clear indication of how Wakanda is governed, and beyond base superstition, what the people think. I got the feeling that some of the stuff that Lee and Kirby established about Wakanda were things that McGregor wanted to ignore or avoid.

I also found it interesting that a small nation like Wakanda would contain such a variety of ecosystems, as we find deep jungle, Antarctic conditions, and places where dinosaurs still roam.  And yet, so many of these places are surprises to T’Challa, the hereditary ruler of this small place.

I thought that Killmonger was an interesting character.  It took a while for his motivations to become clear, and I’m not sure I ever bought into his reasons for wanting to take control of the nation.  What I really couldn’t understand is how he received so much support from the people. If there were that many grievances against T’Challa’s rule (which is understandable, given that he’d just spent years with the Avengers), I would have like to have seen them aired a little more clearly.  It’s also not clear where the military support he so clearly enjoyed was coming from – he somehow had the means to cage and transport massive dinosaurs, but his home village was shown as a primitive place.

Maybe I’m expecting too much from a comic that came out in the 70s and was called Jungle Action.  It’s clear that Marvel’s understanding of this comic was that T’Challa should fight an animal in every issue, as that is exactly what kept happening.  He took on the mundane, like a crocodile or rhinoceros in the earlier issues, and then leveled up to fighting mythical gorillas, and finally dinosaurs.  Reading these stories in rapid succession left me wondering how many costumes he had (his tends to get torn apart in each issue), and how he recovered from so many cuts (he likes to put his hand or arm in animals’ mouths, it seems).

As much as I saw problems with the Wakanda issues, I did enjoy the Killmonger arc, and the strange characters that McGregor and his collaborators filled the comic with.  The abandoned American arc had a lot more problems going for it.

I love the idea of a character like T’Challa taking on the Ku Klux Klan in a comic from the 70s, but I wish that it had been better thought out, edited, and allowed to end.  There was just too much going on in this story, with the mystery of Monica’s sister’s death moving in and out of centre stage, and the strange confluence of two societies of robed men who like to walk around with daggers and torches.  It was hard to follow which organization was doing what, and then the story didn’t end.

The issue where Monica imagines T’Challa defending her ancestor was surely very progressive at the time, but was kind of clunky from today’s perspective.  Likewise, McGregor’s writing was pretty clunky throughout. He has a tendency to over-describe what the artist is showing, in prose that reminded me at times of Chris Claremont at his most self-indulgent. 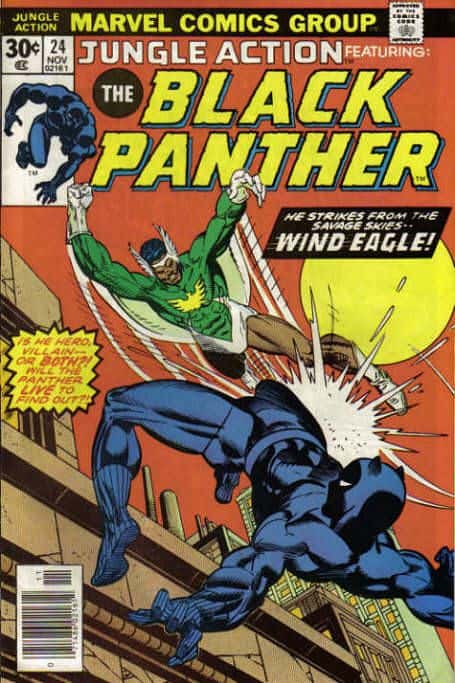 The art, however, is something that I really can’t say anything negative about, especially the issues drawn by Rich Buckler and Billy Graham.  There is a fluidity to their layouts that was very new at that time, and that still feels fresh today.

As a whole, there are a lot of problems with this book, but what stands out and sticks with me is the richness of T’Challa’s character and world.  Lee and Kirby did something unheard of in creating this character, and McGregor added many layers to him and expanded his world. Later writers (and McGregor himself, when he returned for two more stories) continued to build on this foundation, eventually leading to Christopher Priest’s legendary run, which revisited Killmonger’s anger and ambitions, and made much more sense of Wakandan society and its structure.  From there, it was a short hop to the movies, and the character gaining the recognition and cultural importance that he enjoys today.

This volume leaves me wanting to revisit the Panther’s Prey series, and dig out the Marvel Comics Presents issues, to better understand McGregor’s vision for the character, problems and all.

You can check out my Retro Review archives, including my columns on the other Black Panther runs, here.