Welcome to the column where I talk about how nice it would be if the following characters get a live action counterpart In the Titans TV Show.

Starring Nightwing, Starfire, Raven and so many other Titans, TITANS has also become the home of the live action counterparts of underrated titans like donna troy, hawk, dove etc. It has given the chance to several awesome characters to star on the small screen and showcase their potential to a wider audience.

With that in mind, there are lots of characters who also deserve their time in the spotlight and here are some of my hot picks

While it would be awesome to see the mentors of various characters, this is a pipe dream especially considering DC’s monopoly of not allowing tv shows access to larger characters. But never say never right? After all, Bruce Wayne has already shown up in the show.

Another character that is quite impossible for the show to ever adapt. One of the biggest problems lies with the fact that having a Green Lantern would require a larger budget. Titans has been reluctant to even show Donna Troy and Kori flying, Kyle showing up would cause even more problems. But All things said, Kyle would be a fantastic addition and his inclusion could open the way to new arenas of storytelling.

Jason Todd has been awesome on Titans. Curran Walters seems to elicit the exact reaction that the Jason Todd from older comics did. As much as I love the character, he has to die in order for him to reach his full potential. The death of Jason Todd opens the door for Tim Drake and a future Red Hood Appearance. This could happen in a future season and if you ask me, should. Having Tim Drake could help shine a spotlight on this grossly underappreciated character and give him the recognition he deserves. I have this dream that Tim gets to be part of a spin-off series titled Young Justice starring Conner, Cassie and Bart.

Having a telepath could create some entertaining situation and add a lot of firepower to the team. Lilith is a long-time Titan, another underrated character and a powerful character. Introducing Lilith gives the Titans another way of dealing with potential problems and it could also shine a much needed spotlight on the red headed Titan.

This one seems to be on the way. Titans Season 2 name dropped and confirmed that Donna Troy is in contact with the former Speedy. Roy is an original Titan and the red head has always managed to keep things entertaining. Introducing Roy as a single dad would be the best choice in my opinion.

This is a no brainer if you ask me. Titans has revealed that the Flash exists and that there is an in-universe Justice League. This effectively confirms Wally West exists. He might exist as the Flash or Kid Flash, but this Original Titan needs to show up on the show in the future. My heart was broken when Garth died denying an Original Titans roster on the show. But it shouldn’t be tough to bring him back. The red headed speedster deserves to show up and the legacy trinity of Wally, Dick and Donna assembling would be insanely cool.

What characters would you want on Titans?

These are some of my picks and I would love to see any or all of them on screen one day. 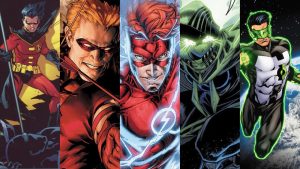