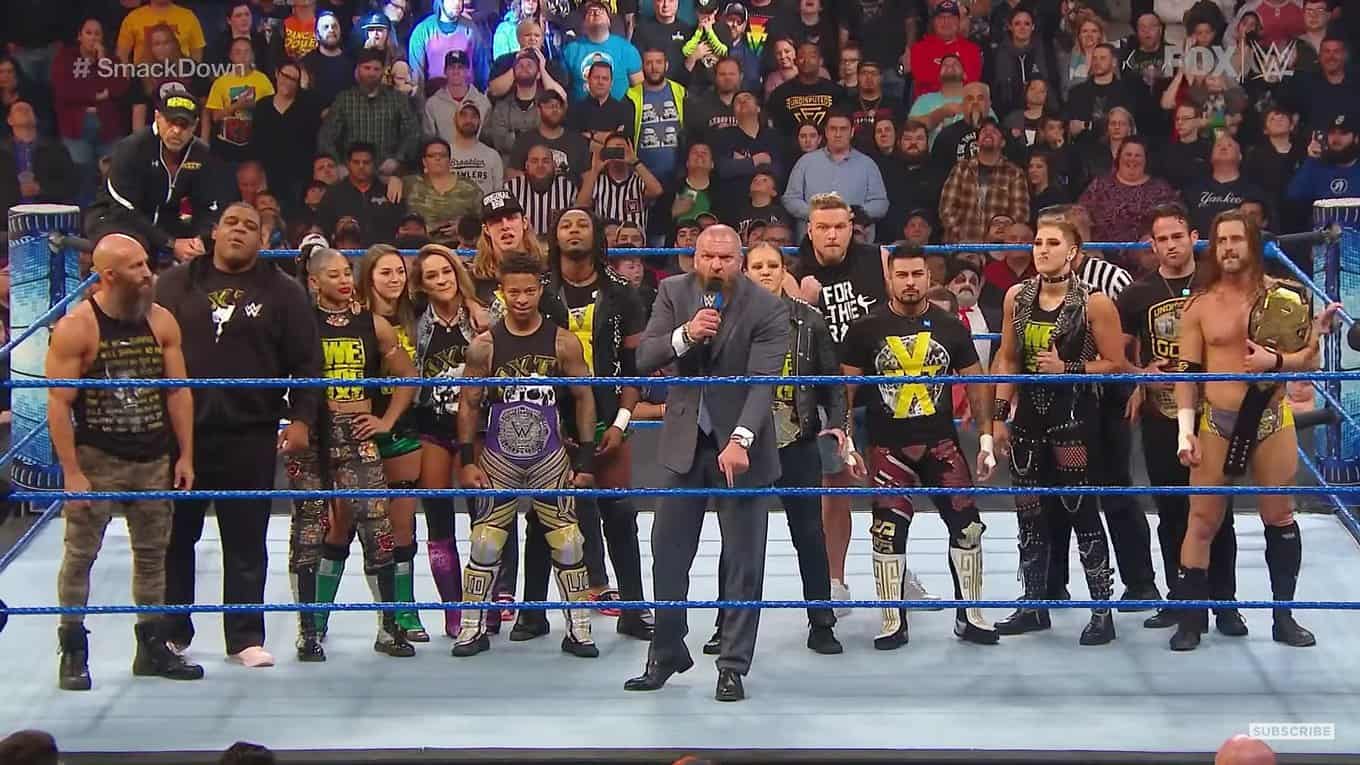 I watched this show only because I heard about the whole airplane thing and I was really intrigued how they were going to get around it.

It surprised me. Then in a Disqus discussion with Dr Spain (after his own recap of the show) I was encouraged to do a 10 Thoughts on it, so… here I am!

1) No Corey Graves and Michael Cole means this show is already better than it’s been in wa-a-ay too long. (Though Renee Young is still insisting on playing a heel/face/tweener character, fluctuating with her hairspray, which sh*ts me no end.)

2) Brock Lesnar and Paul Heyman are out. To make up for a lack of Smackdown talent, showing the entire match (not a “Match Flow” thing) of Valasquez and Lesnar might have been a good idea if the match had been any good. At least they showed the best bit – Mysterio going to town on Lesnar with a chair. This leads to Lesnar quitting Smackdown to go to Raw so he can get his hands on Mysterio. Called it in my Crown Jewel 10 Thoughts column – Mysterio v Lesnar in a chairs match at TLC, and a blow-off match at WM36. Still, a good Heyman promo as usual, and now the problem of 2 champions on Smackdown has been alleviated.

3) HHH and Shawn Michaels are seen as Lesnar and Heyman leave the stadium, arena, beer hall, whatever it is. Well, subtlety was never WWE’s strong point.

4) Bayley (with Sasha Banks) v Nikki Cross (without Alexa Bliss)
While she should not have won here, Cross so should be champion at some point in time. She is ready, and she can wrestle, and when she hits, she hits hard. Tone down the character and she’ll be great. Better than Banks, that’s for sure. Match was fine and perfectly acceptable, with Bayley winning after Banks interference. And then Shayna Baszler, the NXT women’s champ comes out of the crowd, kills Banks with one blow, kicks Cross out of the ring, and then just destroys Bayley. Bayley even manages to mess up taking a move, but Baszler just powers her through it anyway. Well… that was a definitive statement.

5) Sami Zayn is mouthing off backstage, Matt Riddle and Keith Lee take umbrage, a chase ends up in the ring (of course… where else would he run to? Moron) and Riddle and Lee decide to rip him a new one. The Bro Derek is followed by a Lee big fat moonsault (™Vader) and Zayn is left mush. Well… yes, that was a definitive statement.

6) Miz-TV was supposed to feature Bray Wyatt, but he’s held up by airplane issues (“Surely you can’t be serious.” “I am serious. And don’t call me Shirley.”) so Miz decides to interview himself, but he is interrupted by Tommaso Ciampa, and this becomes…
The Miz v Tommaso Ciampa
And this is a very back and forth match, given some time. Normally I’d say that Miz should have been squashed like a bug (despite his titles, he is still somewhere in the “Iron” Mike Sharpe realm of wrestling ability), but with Ciampa’s recent neck surgery, that back and forthiness is fine. And Ciampa wins! Clean! Well… yes indeed, that was a definitive statement.

7) Daniel Bryan backstage, teasing a match with HHH, then Michaels, then gets one with Adam Cole (Bay-bay), and Bryan wants it for the NXT title. Good segment.

8) Fire & Desire v Carmella & Dana Brooke
Hang on, Bianca Belair is beating the snot out of Carmella & Dana backstage (thank God! That means they won’t be wrestling… or what they call wrestling). This means, instead, we get…
Fire & Desire v Carmella & Dana Brooke Rhea Ripley & Tegan Knox
Biased here! I’ve been punched in the face by Rhea Ripley and suplexed by her, and she is a cool chick and strong as a freakin’ ox. And, sure enough, in a matter of moments, Ripley and Knox kill Fire & Desire, with Ripley locking in a weird inverted suspended hanging cloverleaf variation for the painful submission win. Well… yes, indeed, it must be said that was quite the definitive statement.

[8a) Look, while I applaud WWE for what they’ve done for women’s wrestling, and pushing for a women’s match in Saudi Arabia, the fact it is Saudi Arabia is dodgy as f*ck. Stephanie’s self back-patting is fine and dandy, but the blood money they’ve taken on the backs of the women (and homosexuals and people from other countries) who are still being repressed by that regime is nauseating. And trust me – I live in a nasty Fascist, Theocratic Police State. I know about horrid regimes.]

9) NXT Title: Daniel Bryan v Adam Cole (c)
Sorry, AEW, I love you to bits. But THIS was the best TV match of 2019. My God! This was the Daniel Bryan of old. Unlike nearly every WWE superstar he has faced in the past 5 years, Adam Cole was up for it, and they did not slow it down. Even Bryan-Styles, which should have been awesome, felt stuck in second gear. This was not. There was back and forth wrestling, great submission moves, high impact shots and it did not let up. They took and delivered everything including the kitchen sink. More to the point – it was given time. Bryan was the veteran who wanted to show the upstarts who was boss; Cole was the new-comer who wanted to prove himself. They let it all out. And then we had a clean win for Cole! Okay… yes indeed, it must be said that that was quite the incredible, definitive statement.

10) HHH gathers the NXT crew in the ring and delivers a speech all about HHH (and NXT as well). It went on a little long, but they stood tall in the ring. NXT won everything tonight. They dominated. As I said on Disqus – this is how the Invasion angle back in 2001 should have gone down. That would have made more money than any of us could have imagined and Vince would be a legitimate billionaire now, and probably be President of the USA. This was so amazingly well done. And bravo to the Smackdown Superstars for going along with it and not just letting the NXT people win, but putting them over and letting them dominate.

So… I am torn. This was possibly the best television wrestling show of 2019. That last match was PPV-calibre. I want to see those two go at it again on a PPV in an iron-man match. What a freakin’ show. But, on the other hand, it has made the other WWE programming look worse by comparison, and that is not good for anyone.

WWE have finally managed to get a shot fired over AEW’s bow. All it took was NXT and Smackdown working together, and an airplane to breakdown (“A hospital? What is it?” “A big building full of patients, but that’s not important right now.”) to get to this level.