Back in high school, my chemistry teacher would remind us to clean up our lab glassware because he didn’t want a fly situation. We didn’t know if he was referencing the actual pests or The Fly movie. I hoped he meant the movie since was the biggest warning to scientists was to keep your experiments clean. The film was a shocker about a scientist who tries for teleportation, but ends up merging with the insect. The film was such a hit they made two more sequels although Vincent Price was only in the first two. Then in the ’80s, David Cronenberg did his adaptation of The Fly that made it a rather grotesque love story with Jeff Goldblum. That film led to a sequel with Eric Stoltz discovering his genes are mutated from dad’s experiment. Now all five films and dozens of bonus features are being boxed together for The Fly Collection. Here’s the details from Scream Factory with all the buzz: 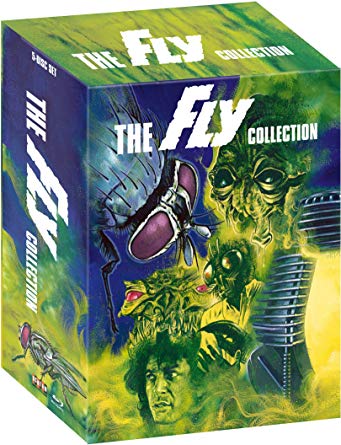 Los Angeles, CA — Get ready for hours of skin-crawling terror as you witness a transformation like no other – from man to fly. On December 10, 2019, Scream Factory proudly presents the insect-morphing horror set The Fly Collection in a definitive Blu-ray™ release. This massive 5-disc set consists of the chilling original trilogy, the eye-popping 80s remake and its terrifying sequel, and is packed with hours of fascinating special features.

The complete list of bonus features includes a bevy of new interviews and audio commentaries with cast and crew, including with producers Mel Brooks and Stuart Cornfeld, screenwriter Mick Garris and composer Howard Shore. The Curse of the Fly and The Return of the Fly are presented here for the first time on Blu-ray in North America.

Experience the ultimate in horror The Fly Collection, featuring 1958’s The Fly starring Vincent Price, The Return of the Fly, in which the son of the original scientist continues his father’s work and The Curse of the Fly, in which a woman finds she’s married into the wrong family. David Cronenberg’s 1986 remake of The Fly electrified audiences with its ground-breaking, gooey effects and the riveting performance by Jeff Goldblum as Seth Brundle, a scientist whose teleporting experiment takes a tragic toll. The hair-raising sequel to the remake stars Eric Stoltz as Seth Brundle’s son, who is beginning to show the effects of his father’s experiment.