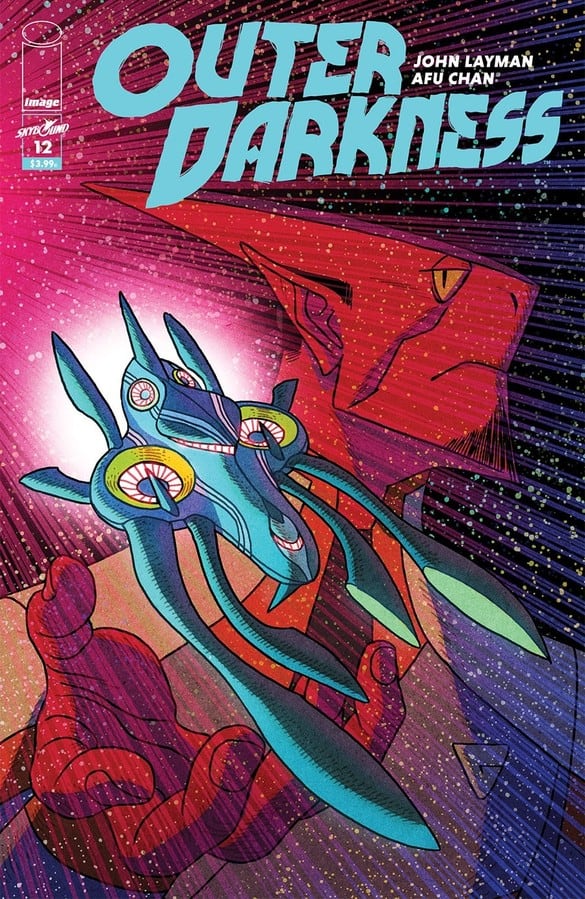 Outer Darkness #12 – From the very beginning, Captain Rigg has been working his own plan, which is put into full effect this issue, as he steals the Charon and subverts its mission for his own purposes.  The thing is, there are some members of the original crew sticking around that he hadn’t expected, and Admiral Prakash is pretty quick at sending out another ship to track him down. This has been my favourite new series of 2019, and I’m sure that Season Two is going to be even better.  I’m so happy that books like this are able to find success, and can’t wait to see what happens when John Layman and Afu Chan return with new issues in a few months.

Captain America #16 – It took a little while, but I’m fully invested in Ta-Nehisi Coates’s Cap now.  Steve is working with the Daughters of Liberty to track down Scourge, who seems to be killing police now, and his investigation leads him to an old rival (who I feel Coates over-plays as a friend).  At the same time, Wilson Fisk’s relationship with the Power Elite gets rocky. I like how Coates is paying homage to Mark Gruenwald’s time with Captain America in this series. 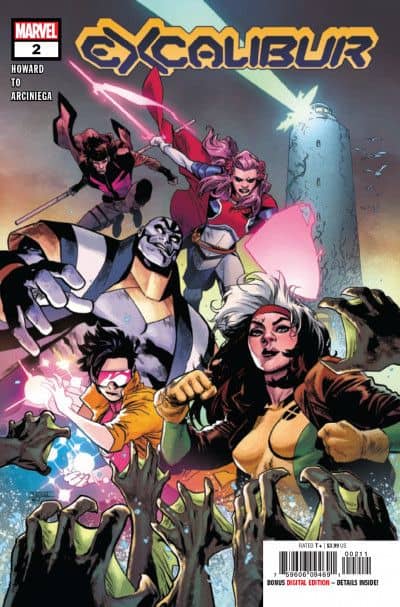 Excalibur #2 – The first issue of Excalibur left me a little cold, but I thought I’d give it a second chance.  I’m still not all that impressed with this book, which has a small squad of X-People trying to figure out what to do about Morgane Le Fay’s capturing of Brian Braddock.  We watch them establish a lighthouse, and bicker a little, over the fact that Rogue has turned into a naked sleeping garden bed for Krakoan flowers. Jubilee’s baby changes sizes (a lot at the very end), and I’m left wondering why Rictor was advertised as part of the team, why they don’t simply grab more help from Krakoa, and where this title is headed.  I don’t think I’ll be around to find out though…

Farmhand #11 – Farmhand is back with a new arc that feels a lot darker than the previous two.  We get a lot more information about the history of the Jenkins family, and their connection to their local area.  We also see what the earliest days of the seed project were like, and get a sense that there’s even more going on in this book than we were aware.  Rob Guillory has such a strange concept for this series (a man has figured out how to grow replacement organs with plants, but it’s not worked out the way it was supposed to), and balances horror, humour, and family drama so well.

Immortal Hulk #27 – The Hulk launches his anti-Roxxon initiative with a targeted attack while Agger, the Minotaur who runs the company, reveals to some of his higher ups that the world is in worse environmental shape than anyone has projected.  Al Ewing is really going all in on the messaging in this comic, as Banner’s quest to fix the human world takes him to new approaches, and continues to make this the most exciting the Hulk has been in years. This issue is more focused than other recent ones, so we don’t see a lot of the other Gamma-affected characters, but it is nice to see Banner and the Hulk working together for a change.

Marauders #2 – I didn’t love the first issue of Marauders, but it feels like it might be one of the more important new X-Titles, and I decided to give it another chance.  I didn’t exactly dislike the book, but I am left with a list of things that I think are poor decisions, such as Kitty Pryde getting knuckle tattoos (that spell out “Hold Fast”), Pyro getting a face tattoo, and the general sense of directionlessness indicated for Kitty and her team.  Gerry Duggan has not gained my trust, with lacklustre runs on Uncanny Avengers and Guardians of the Galaxy, so I’m not sure that I expect much from this comic. I might pick up the next issue though, as I’m an optimistic sort of person.

Once & Future #4 – More stuff gets revealed in Kieron Gillen and Dan Mora’s book about the return of Arthurian characters and archetypes into the modern day.  Gillen pulls a few interesting twists in this issue, but I still feel like this is not among his most impressive titles. It’s good, but I can’t escape the sense that I’m reading a tribute to Warren Ellis…

Rai #1 – I’ve become very sceptical of Valiant’s output lately, as I’m finding that the slate doesn’t interest me as much as it once did.  This is a strong debut though, as Rai and his smaller, older brother Raijin, cross the ruined Earth looking for the digital backups of Father, the malevolent AI that ruled Japan.  Artist Juan José Ryp embraces his inner Geof Darrow in Rai’s massive fight against dinosaur-riding Technobarons, while Raijin hangs out at a bar. I like the banter between the brothers, and hope that Dan Abnett gets the time and space to develop this book properly.

SFSX #3 – This issue features a guest artist, Alejandra Gutiérrez, who I kept thinking might be Brandon Graham.  The issue focuses on the Dirty Mind, the secret sex club that exists in opposition to The Party and its rules about morality and how people should live, and takes place between the scenes of issue two.  It gives Tina Horn the chance to flesh out (lol) some of the supporting characters of the series, and help to build the world that she’s created here. I enjoyed it as much as I have every issue of this title so far – a great late addition to Image’s 2019 lineup.

Star Wars #75 – I’d long wondered how long Marvel would stretch out the time period between the first Star Wars movie and The Empire Strikes Back, and the answer is that they got 75 issues (and countless tie-ins) out of that era, but their desire to relaunch a title has taken over, and so we end up in orbit around Hoth by the end of the issue (I’d have thought we could get a good arc out of establishing that base though).  Greg Pak’s run on this title was short, but apparently he’s getting a Darth Vader series in the new year. This issue ties together the three threads of his arc, as our heroes end up facing off against Vader on the rock planet, which has a bunch of surprises at its core. I liked this issue, but can’t escape the feeling that confrontations with Vader should be much more momentous than this. I do hope to see Phil Noto on some more Star Wars at some point.

Vampirella #5 – New problems arise in Vampirella’s life, as a half-demon is resurrected, and a half-brother comes around.  I have no familiarity with the supporting characters in this series, and everything is new to me, so I can only guess at how deep Christopher Priest is going into the archives to assemble this cast, but I do know that I always enjoy his off-kilter and intricate plotting, and that I’m going to be relying on this book to replace Deathstroke after it ends next month.  I’ve been very impressed with this title, and hope it gets a good long run. 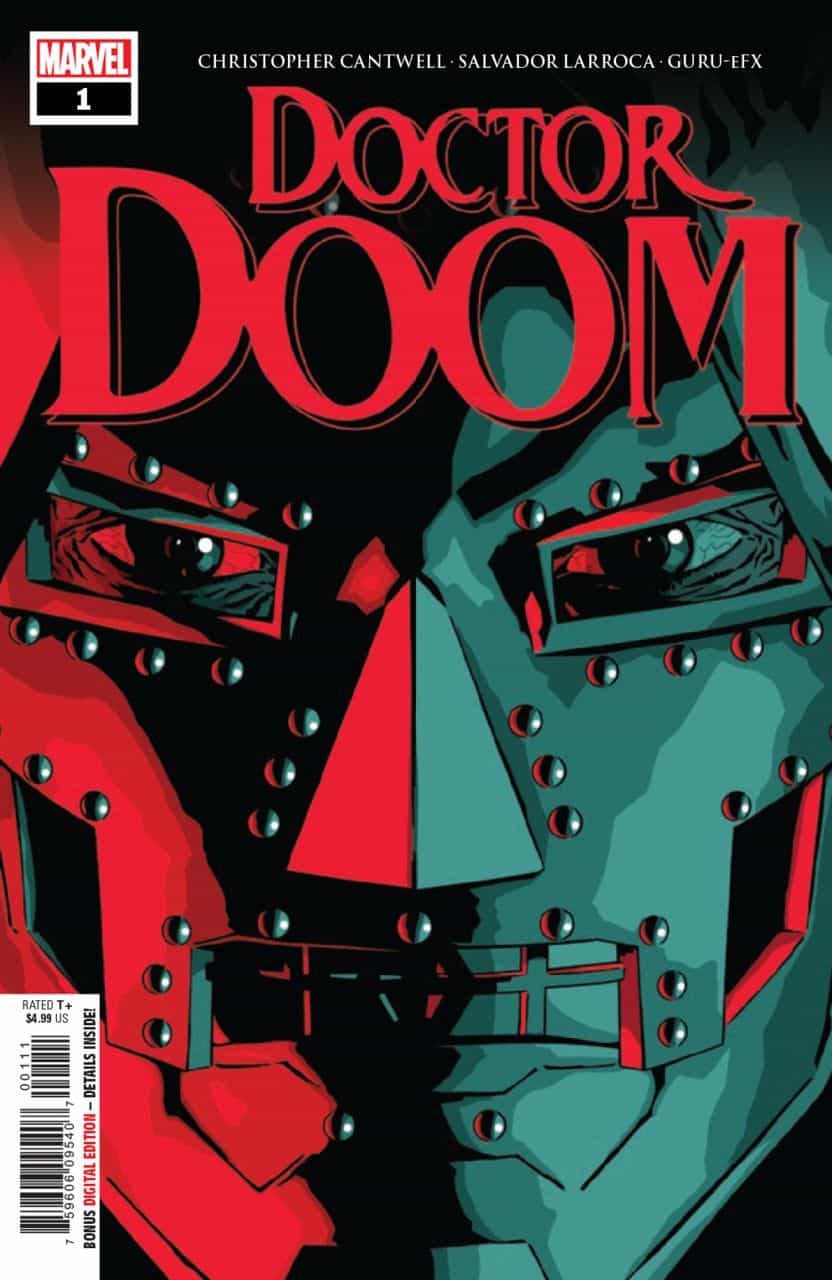 Doctor Doom #1&2 – I think I made a mistake in ignoring this title.  Christopher Cantwell gives us a very interesting look at Doom, a favourite villain of mine.  When the series opens, Doom provides commentary on a news show that a new plan to reduce carbon in the atmosphere is bound to fail, but is not behind the attack on the moon base operating this system, despite the fact that it looks like it came from Latveria.  In short order, Doom is arrested, but manages to escape due to a strange friendship he’s developed with Kang the Conqueror. Cantwell lays the groundwork for an interesting examination of Doom’s personality, and fills this book with cameos from characters like Union Jack and Silver Sable.  I’m a little surprised to see Morgan Le Fay show up here and in Excalibur at the same time, but I like how Cantwell builds from Doom’s recent appearances in Fantastic Four. I’m also always happy to see Salvador Larroca draw Doom. I think I might be adding this to my pullfile, as it’s much better than I would have expected.

War of the Realms: New Agents of Atlas #1&2 – I know I’m hella late to this party, but I became more interested in the New Agents of Atlas when I saw they ended up with an ongoing series (which I believe is already cancelled).  Greg Pak tries his best to introduce a raft of new characters, and find reason for them to interact with the team of Asian heroes he first assembled in the Totally Awesome Hulk series. The problem is, we don’t get to know the new characters at all, so it’s not all that interesting.  There’s just too much happening too quickly for it to resonate.

I’ve yet to be disappointed with an offering from TKO Studios, the up and coming publisher that offers their books as both a trade paperback and as a handsomely slipcased six-issue miniseries.I was pleasantly surprised last week when I got my copy of Sentient, one of their second wave books, in the mail last week, having given up hope of it arriving this calendar year.

Like the previous ones I’ve read, I was immediately impressed with the production quality of the book, which has nice heavy paper, and a really good feel to it.  My pleasure only increased when I started to read the book.

Sentient is set on the USS Montgomery, a colony ship delivering a small group of families to a distant colony.  Things have gotten bad on Earth, and so it is time to start establishing families on the colony, even though it is being plagued by separatist unrest.  The journey involves passing through a radiation belt that makes communication with either Earth or the planet impossible (making me wonder how the two places communicate with one another).  As the ship passes into the silent zone, one of the women on board enacts her plan to kill all the other adults, and to take the large group of children living there to her separatist compatriots.

The plan doesn’t work, as Valarie, the AI that runs the ship, kills the woman to protect the children (her safety protocols are shut off at the moment).  After that, Valarie has to continue her plotted trip, while also looking after the kids.  Lil, the oldest child, is more or less in charge of the kids, and she does not trust Isaac, the son of the murderess.

This alone would make for an interesting story, as the AI has to figure out how to exceed her parameters, but Jeff Lemire tosses some other threats, from preteen rage to other separatist vessels, at her.  I found this book pretty suspenseful, and was impressed with the character development achieved in limited space.

Gabriel Walta’s art is terrific on this book.  His muted colours work great on this paper, and he packs a lot of emotion into his characters’ faces.  I find it interesting that in his first big work since the excellent Vision miniseries, he is again having to give life to robotic characters.

I want to check out more of TKO’s second wave, as this is the only book that I ordered from it.  I’m hoping they announce more titles soon, as everything they’ve done so far has been great.