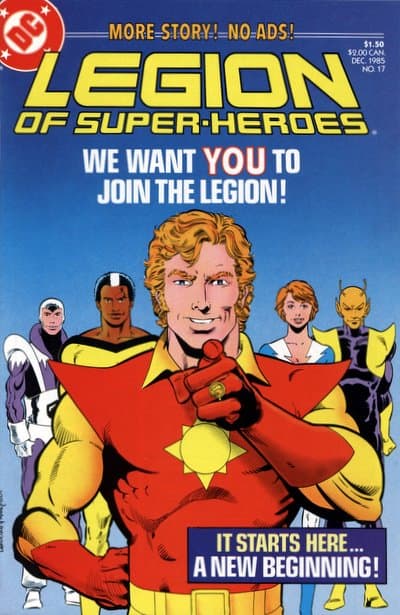 Spoilers (from thirty-one to thirty-four years ago)

When Greg LaRocque came onto the Legion of Super-Heroes with issue seventeen (having already drawn #15), he heralded a new day with the deluxe format book.  The page count increased, as ads were removed from the comic. Also, he joined just as five new and diverse Legionnaires did, and as the series had to chart its way in the post-Crisis DC Universe.  This was a very exciting time at DC, where Crisis and its changes and rebooting caused writers, editors, and artists to look at established characters in new ways.

The Legion’s entire history was tied closely to Superboy’s, and now Superboy never actually existed in the mainstream new DCU.  Neither did Supergirl, I think (it honestly got pretty confusing at times). So, creators had to integrate their titles to the new approach, while maintaining the quality of storytelling and reader interest.

Levitz, from what I can remember, did that quite well during this run, with LaRocque’s support, as well as the occasional appearance of Keith Giffen.  Levitz and LaRocque worked together for more than two years, and it is during this time (I think during the Millennium event) that I first read a Legion comic as it came out (there’d been some randomly acquired back issues before that), and then, with the big push for the 30th Anniversary of the team, I became a regular, and then devoted, reader.  I haven’t read those issues since the late 80s though, and am excited to be reading them again, with all the backstory so fresh in my mind.

This is one of the longest and most consistent runs that I can think of, and while I’ve chosen to end this column here with two major storylines (the Time Trapper and the Starfinger ones) unresolved, it’s because with the next issue, Keith Giffen returns as both artist and co-plotter, and things begin changing very quickly.

When I think of Levitz and Larocque’s time together with the Legion, I think of how well they navigated the team through a very turbulent time at DC.  During the course of this run, DC went through the Crisis, had its major characters reimagined, and then rolled through events like Legends and Millennium.  As well, series like Watchmen, Batman Year One, Justice League International, and Suicide Squad helped redefine what DC meant for a new age. Levitz had to navigate the new demand for darker stories while showing a beautiful vision of the future, while also figuring out what to do with a team whose founding inspiration has been retconned out of existence.

I know that at the time, and perhaps still, many fans did not like the Time Trapper’s pocket universe Superboy, but that solution did allow the Legion to still honour his memory, acknowledge his contributions to the team, and so long as no one thought too much about it (the existence of Supergirl just doesn’t get mentioned again), it all worked well enough.  It also provided a springboard for the Legion to use as a rationale for having great anger for the Trapper, leading to the conspiracy storyline.

I’m not sure that the conspiracy worked as well as it could have, simply because it kind of came out of nowhere, aside from the knowledge that Brainy was working on something important.  Levitz usually seeded his stories for years (like with the Universo and Starfinger stories) before pulling the trigger, but the conspiracy felt rushed. I’m also not sure I can buy Imra being willing to either die or take a life, even if it’s out of revenge.  Imra got a lot of strong character work during this time (I like how the Universo arc works as the end of a trilogy focusing on the founders, with Legionnaires 3 having been mostly about Garth, and Rokk getting his own miniseries after that), and became a stronger character.  I can’t accept that she, as a young mother, would consider sacrificing herself in this way.

A few characters gained a lot of focus during this time, and sometimes it worked very well.  The mystery around Sensor Girl’s identity was pretty riveting, even when I knew who she was all along this time around.  I like how Projectra became a more mysterious and grounded character, and that she chose to keep wearing the mask even after everyone learned who she was.

Similarly, I like the way Levitz gave Polar Boy the confidence (or maybe just lack of awareness) to think that, as a rookie Legionnaire, he could become leader.  I know that the elections were determined by the readership (long before DC fans could vote to kill off Robin), and that Brek’s choice was an odd one, but Levitz made it work well, especially as we watched his confidence erode the longer he stayed in the job.

It was interesting to watch Mon-El go through the despair of having his lead poisoning return, the joy of his cure, and then also see darkness consume him in the wake of Superboy’s death.  It was cool that these events put some distance between him and Shadow Lass, as they were always seen as the most stable of couples. Likewise, having Star Boy depart, and to have Atmos woo Dream Girl was an interesting choice, as was Atmos’s campaign to join the team.  I just wish Levitz explained, at some point, why Atmos didn’t have arm pits (or, maybe Atmos was just all arm pit).

I also like how Levitz built a more diverse Legion during this run, including non-humanoid characters like Tellus and Quislet.  I love Tellus, and his different take on humanity (while not stepping on Blok’s usual schtick), but I’m not a fan of Quislet. The character is just too silly (there’s a ‘poop-a-doop’ sound effect whenever he’s around), and his inclusion on the team never made much sense – we didn’t really see him give a good reason to be chosen over some of the other candidates.  I do like that he was there to progress Wildfire’s character, but I also loved the old look Wildfire had much more than the new one.

Over the course of this run, I was struck by how odd the Legion’s cast of rogues really are.  The Legion of Super-Villains (from the column before this) were mainly made up of evil versions of the core Legion characters.  After that, the team spent an inordinate amount of time fighting smugglers or thieves. When they were facing actual villains, they tended to seem pretty silly.  Universo is a hypnotist. Starfinger is impressive, but is dressed in a costume that makes him, when he stands arms and legs akimbo, look like a star (although, if you’ve seen the first Starfinger’s costume…).

Still, this run was terrific.  I pieced this together over years, as it wasn’t until issue fifty-one that I decided to buy the book regularly.  Reading these comics in order, as I’ve been doing starting at the beginning of Levitz’s consecutive years on the title, has been a real treat.  I like the way characters shuffle in and out, and how there’s a real consistency to supporting cast as well. The Legion’s world feels massive, but also familiar and so well-realized.  It’s crazy to think that, as I read one comic a day, I’m burning through a year’s worth of comics every two years, and the quality never dips. Larocque’s art got better when he worked on The Flash (and had considerably fewer characters to manage), but he did a very fine job with this book, assisted throughout by Mike DeCarlo and colourist Carl Gafford (who was on the book almost as long as Levitz was!).

The covers of this book are always beautiful.  Most of them are by Steve Lightle, but towards the end, Ken Steacy (from my wonderful city) started to give the book a more abstract look that I loved.

When Giffen returned to the book, at the height of his Justice League popularity, things started changing in a hurry, as the series rushed towards the big changes leading to Levitz’s departure and a big reboot.  That’s next time.

For some reason, these comics haven’t been collected anywhere.  They should be.