Seth starts the show off with the roster around the ring and gets a CM Punk chant, so he says he tried to get him here, but he’s too afraid to leave a studio. He says that Raw’s losing record showed that everyone on Raw sucked. Randy makes a lewd motion to Seth as he leaves. Charlotte leaves in a huff before everyone else does. Then KO comes down and Seth calls him a turncoat before KO says he’s one to talk. Rusev is served with a restraining order earlier today as Lashley is out to face Titus. Lashley destroys him until track suit Rusev comes down for a brawl. Rusev gets arrested before AOP returns without tops on. They destroy Ryder and Hawkins, who bounce between either complete jobbers or being title contenders – and for some reason, belts aren’t over.

Andrade squashes Akira Tozawa with the hammerlock DDT. Aleister Black wants someone to fight him still. Matt Hardy returns as regular Matt Hardy to face Buddy Murphy. Matt gets a few highlights, including a second rope elbow, but a pair of V triggers hits hard before a Kamigoye lands and ends it. Aleister Black returns and destroys him with strikes before busting his nose up. Charlotte yammers on about Asuka and beating her at WM 34 and ending her streak. AJ comes out, then Orton comes out, and Ricochet comes out, Drew, and then Rey comes out and we get a US Title match after some yammering and a fatal 4 way between all of them except for AJ.

Rey and Ricochet get bounced around a bit before squaring off and Rey beats him with a la mistica small package. AJ works the arm and slows the pace down before Rey gets a code red for 2. Ref gets bumped and Randy RKOs AJ after a 619 and Rey wins it with a frog splash. So Rey goes from being squashed by Brock on Sunday to getting help to win the US Title. 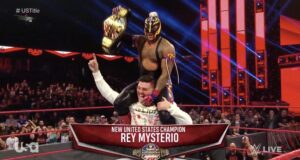 KO says that he knows who he is, but Seth doesn’t know who he is and he’s just a prick.

Asuka and Charlotte have a really good, fast-paced match. Asuka gets a buzzsaw kick that Charlotte absorbs and leads to a spear for 2. Kairi senses danger and comes out to save Asuka, offering up a distraction so Asuka can unload a giant batch of mist to the face and cradle Charlotte for the win. Erick Rowan squashes jobbers, with one guy daring to look under the bag and eats a claw slam twice to end it. The IIconics do a WWEShop ad with Truth. Seth prepares to face KO while AJ stews.

Lana says that Lashley will be okay and as a result, she’ll be okay too. Seth and KO have a pretty solid little TV match. It’s not much beyond their usual mix of big moves and superkicks until both men are down. AOP comes out in their promo suits and destroys Owens, leading to a stomp. So Seth is now seemingly a heel and has his own mini-faction again. It should be a big help for AOP and Seth does better promo work with people to bounce off of – this has the potential to be really good.