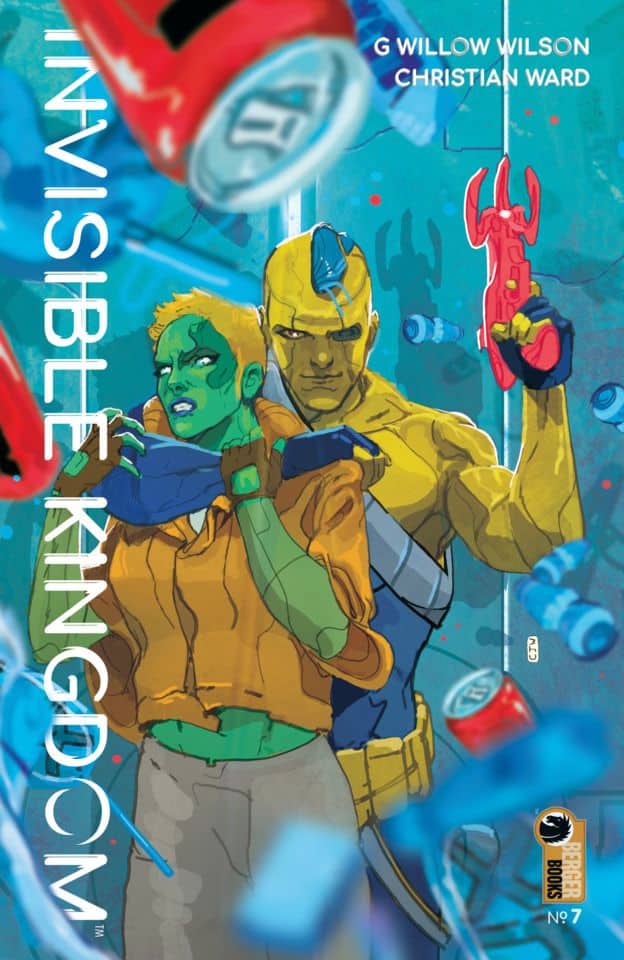 Invisible Kingdom #7 – I was already incredibly happy with everything that was happening in this book, and then G. Willow Wilson and Christian Ward went and further complicated the lives of the crew of the Sun Dog by having them captured by pirates, and having them question their values even further. This book is incredibly well-written, with the characters wrestling with some very serious issues.  Vess continues to get close to Grix, although that doesn’t look like you think it should. I thought the ending was excellent, and am curious to see what happens next issue, when a Lux security ship gets involved in everything else that’s happening.

Ascender #7 – Jeff Lemire and Dustin Nguyen dig into Captain Telsa’s last ten years in this issue, as we see how she went from being a promising Captain in the UGC to the captain of a decrepit boat.  We learn how she met Helda, her first mate and partner, and get an idea of how the planet of Niyrata fell to Mother’s hordes. As always with this title, it’s a gorgeous comic, and I’m glad that Lemire took the time to arrange this exploration of one of my favourite characters in the series.  We also get a hint as to where Dr. Quon might be. 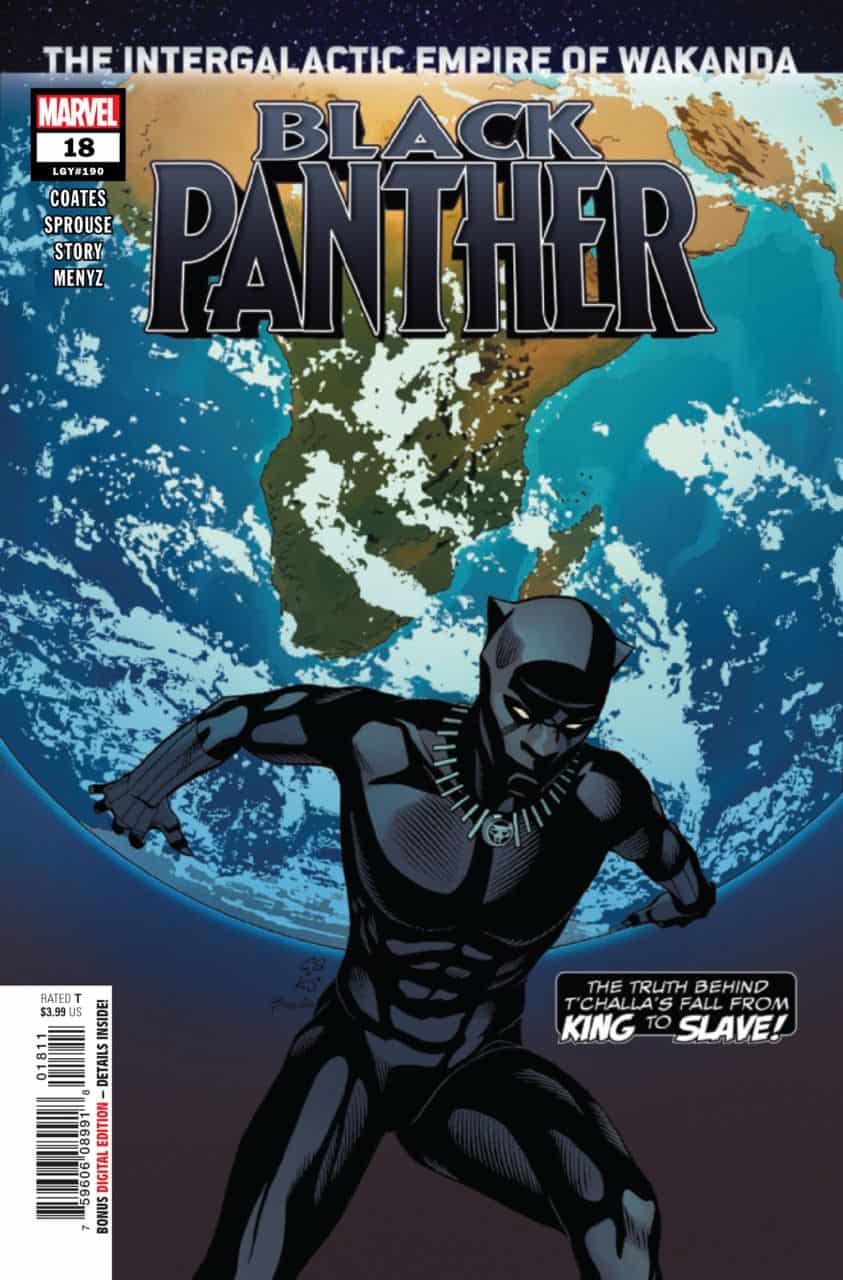 Black Panther #18 – I’d always been a little surprised that Ta-Nehisi Coates’s comics weren’t more overtly political, but this issue satisfies that.  We finally, after like a year and a half, learn just how T’Challa became a slave on the other end of the galaxy, and what happened when he first arrived in the Galactic Empire of Wakanda before this series launched.  It’s a terrific issue, as it has T’Challa really interrogate what empire means, and how societies built on slavery and oppression are able to lie to themselves. I almost expected this book to contain a reading list at the end (like some Howard Zinn, for example), as T’Challa gathers some familiar faces to launch him into the next arc.  It was great seeing Chris Sprouse return for a new issue. This book is at the best it’s been since Coates took over.

Criminal #10 – This entire arc has been built around issues that focus on a single character so far, so when this issue switches from focusing on Dan Farraday, and instead starts to follow Ricky Lawless again, it’s a little jarring.  It also means that the different threads of this story are starting to come together, as Dan tries to track down Jane, and as Ricky learns that his father and Jane intend to leave him behind after their next job. What makes Criminal work so well as a crime comic is the way in which Ed Brubaker and Sean Phillips invest so much time in getting to know and understand the characters.  The fact that we don’t even know what criminal feat has been getting planned for months speaks to that. I love this title.

Doctor Aphra #39 – How often has sex been alluded to in the Star Wars universe?  It’s not often, that’s for sure, so when Aphra and Tolvan get some time together this issue (amid the usual chaos that comes from trying to capture Aphra), it feels like a bigger deal than it would in another property.  Si Spurrier is working to wrap up this series, as the next issue is the big ending, and there are a lot of characters and plotlines that need to be addressed. I am really going to miss this series when it’s gone.

East of West #44 – Mao takes the field herself in an effort to win her battle against the Confederacy, while other potential allies decide to step in, and as Babylon learns from the Horsemen, and Death meets fate or prophecy or something.  This long-running series keeps getting closer to its big finish, and features some truly gorgeous Nick Dragotta art (if you find extreme violence gorgeous at times). This intricately designed series reads as such a contrast to the lighthearted goofiness of Jonathan Hickman’s X-Men (see below), that it doesn’t even feel like it’s written by the same person. 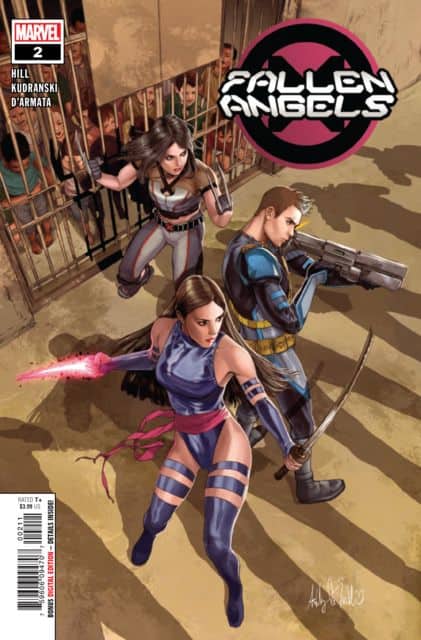 Fallen Angels #2 – Bryan Hill is taking his time getting this series underway, as Psylocke (remember, that’s Kwannon now, not Betsy) examines her thoughts and plans some more, and as Cable prepares to fight against the Overclock drug on his own.  I’m not sure I like how Hill is writing X-23, but I feel like the smaller scope of this book makes it work better than many of the other Dawn of X titles at the moment.

Lazarus Risen #3 – I love how much content is packed into these thicker issues of Lazarus, but I also wish they came out more often, as I find I forget too many details between issues.  This one has Forever facing off against the Zmey, but with the benefit of having faced him before. We also get a deeper look at how the war is going, and how various members of the family are holding up.  We also get a big moment in the life of Number 8, and a decent short prose story written by Andrew Constant. Greg Rucka and Michael Lark have built a fascinating world in this series, and it’s cool to get to explore it from time to time. 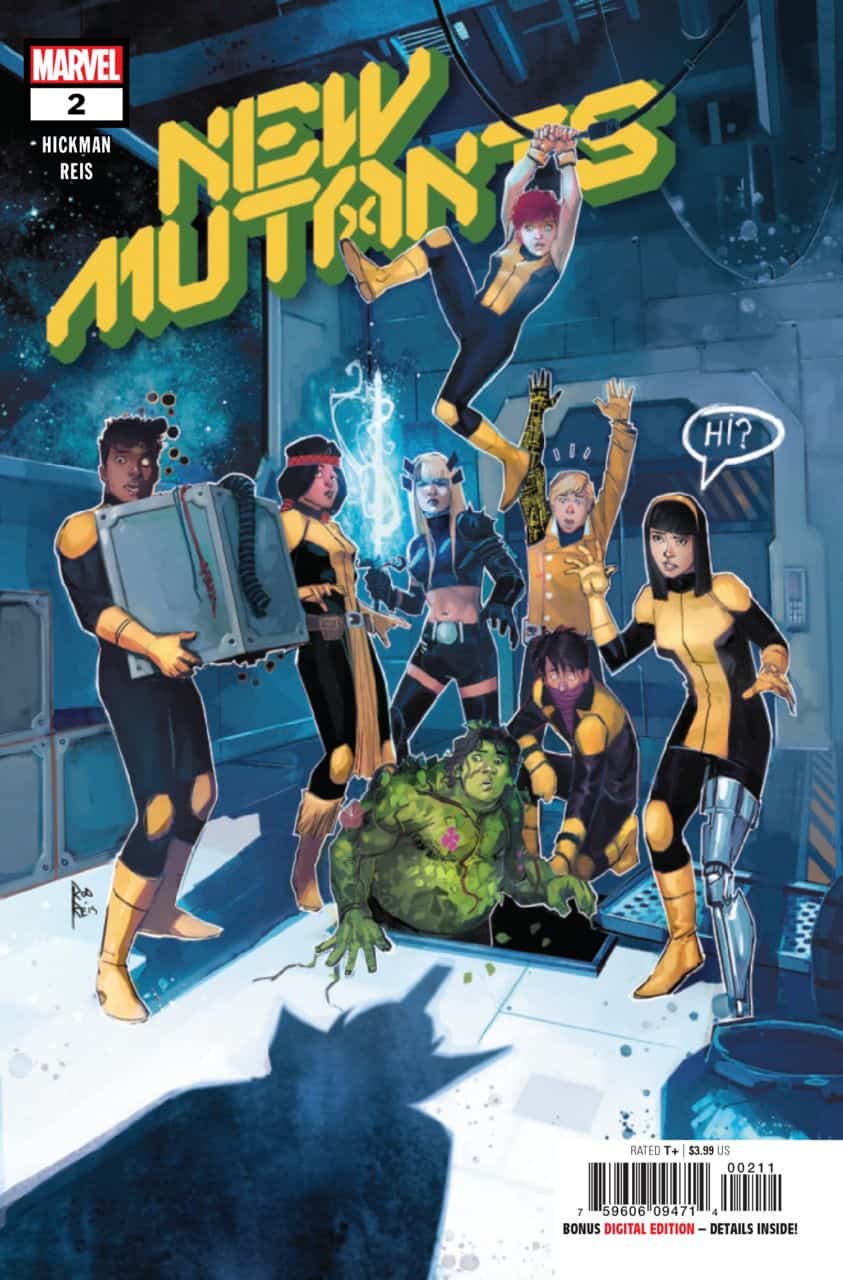 New Mutants #2 – I was struck by a few things while reading this issue.  First, I thought that Jonathan Hickman was co-writing this series with Ed Brisson, but Brisson is nowhere to be found in the credits.  I was also surprised by how lighthearted a tone Hickman is setting for this series, and how he’s turned Bobby DaCosta into a millennial bubblehead, whereas he portrayed him as having more gravitas in his Avengers run.  I don’t like Bimbo Bobby that much, and I’m wondering how he’s gone from running AIM (and having a shock of white hair) to blindly signing whatever his lawyers put in front of him. The team are sentenced to prison by the Shi’ar, but they are remanded into the custody of Smasher and Cannonball, before they end up getting roped into some Shi’ar stuff.  I don’t really understand why this series has nothing to do with Krakoa, and how Cypher, who is basically the island’s translator, would be off on the other side of the galaxy. There’s enough here to keep me wanting to come back, but I really didn’t expect this title to be so silly, especially with Rod Reis, a very serious artist, taking care of the visuals.  It’s a little jarring.

Valkyrie: Jane Foster #5 – Jane’s fight with the Grim Reaper takes up most of this issue, and she does a good job of establishing why she’s not a typical superhero.  I have high hopes for this book, and now that the first trade is out of the way, I think that Al Ewing and Jason Aaron have built an interesting little corner of the Marvel Universe for Jane to occupy.  I like that she hasn’t immediately joined any teams, and is trying to find balance in her life. This is a title to watch.

X-Force #2 – I think that one thing that is becoming clear across the various X-Books, is that the system that Xavier set up on Krakoa is one that does not lend itself to chains of command.  In the wake of Xavier’s assassination, various factions of the Krakoan elite set to planning his resurrection (I’m not sure why this is so difficult, given that they’ve brought just about everyone else back), while Wolverine and Kid Omega investigate his killers.  I’m not sure why, if the island is on lock-down, there’s so much transit on and off of it, or why there isn’t a more organized response to things. Ben Percy and Joshua Cassara throw a lot of characters into this book, but I’m still not sure who the actual cast of the title is, or what makes this X-Force and not the secondary X-Men title.  I think some explaining of core concepts is necessary, and soon.

Yondu #1 – I hated that Marvel decided to make the movie version of Yondu a thing, as I always liked the classic Guardian of the Galaxy from the future.  This new series, by Zac Thompson, Lonnie Nadler, and John McCrea addresses that, having the two versions, from different eras, meet. Maybe it’s because Thompson and Nadler are working with McCrae on this book, but I got a huge Garth Ennis vibe from it.  The problem is, nothing much stuck with me, and I’m not sure how established Marvel hopes to make this character, or if this is the way to do it.

Astro City Vol. 11 – Private Lives – There’s something so comforting about reading another volume of Astro City.  This title is so comforting and timeless, and while it has an intricate continuity to it, none of it really matters, as Kurt Busiek crafts such character-driven stories.  This volume is mostly made up of one-and-done stories, with a two-parter in the middle. We see the Astro City version of Doctor Strange, and learn about a robotics genius who is content living a simple life in the desert amidst reformed robots.  This is a solid volume, with some typically great Brad Anderson art (and a Graham Nolan guest spot).