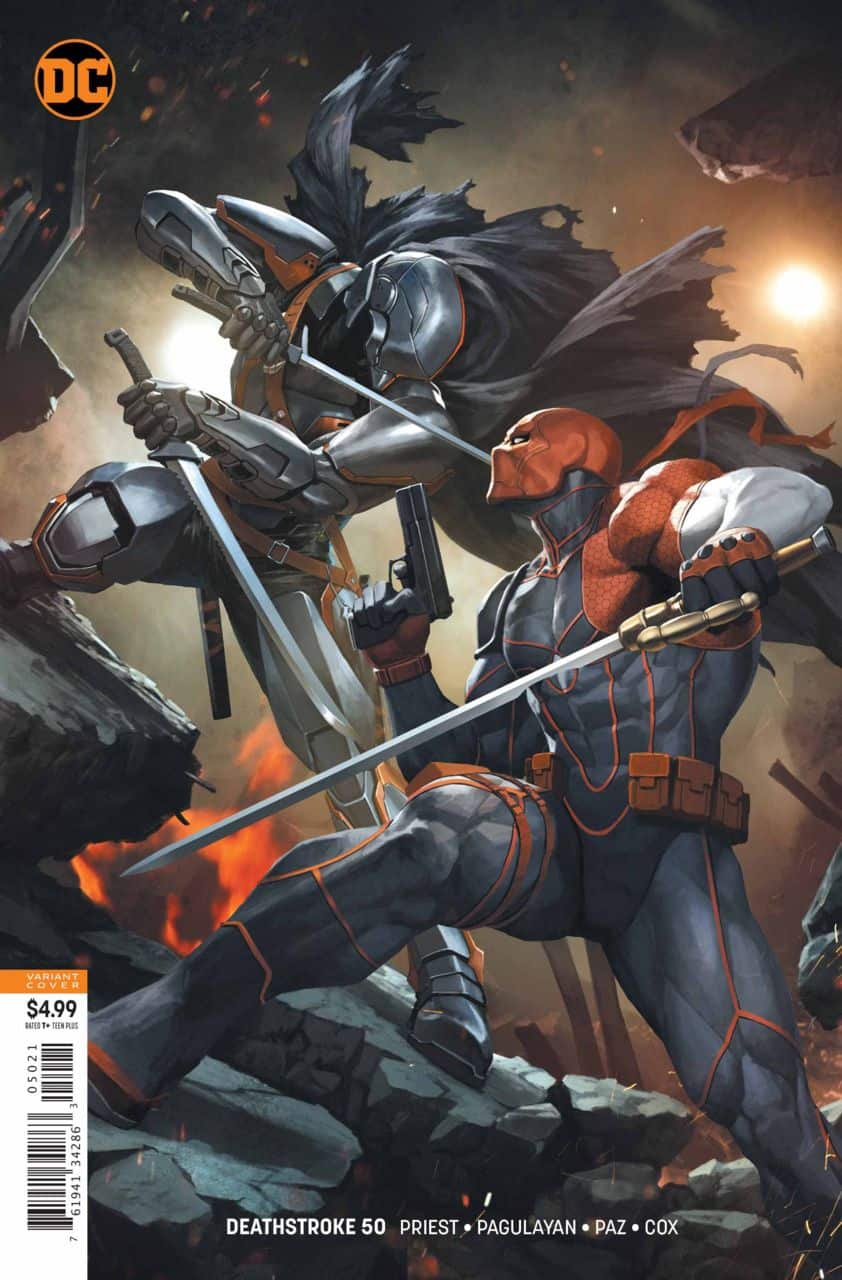 Deathstroke #50 – If you’ve been reading my work on this site for very long at all, you’d know that Christopher Priest is my favourite superhero comics writer.  His Deathstroke comes to an end with this issue, after fifty issues (in this climate!) of being the best monthly DC comic of the Rebirth and post-Rebirth era. Priest expanded Slade’s world, focusing on his dysfunctional family, and surrounding him with some pretty fascinating supporting characters.  Most of this issue is given over to Slade’s conflict with his older, alternate reality self, although really, you could argue that this entire run has been about Slade’s battle with his own worst impulses; it just took until the last few issues for Priest to make that a battle that happens in the flesh.  I can’t say enough good things about this series, which helped to establish Slade as one of the most complex figures in the DCU. Priest was able to roll with whatever nonsense DC tossed at him (dark multiverses, Year of the Villain, and whatever other flavour of the month they tossed down his throat). This title has been very complex, and would likely hold up very well to a sustained reread, I’m just not sure when I’ll find time to do that.  Priest is currently writing Vampirella at Dynamite, and I’m loving that series too, even though I know nothing about the character. I’m hoping he’ll get another title, and the space to properly develop it, at either DC or Marvel soon. I’m going to miss this title and these characters. 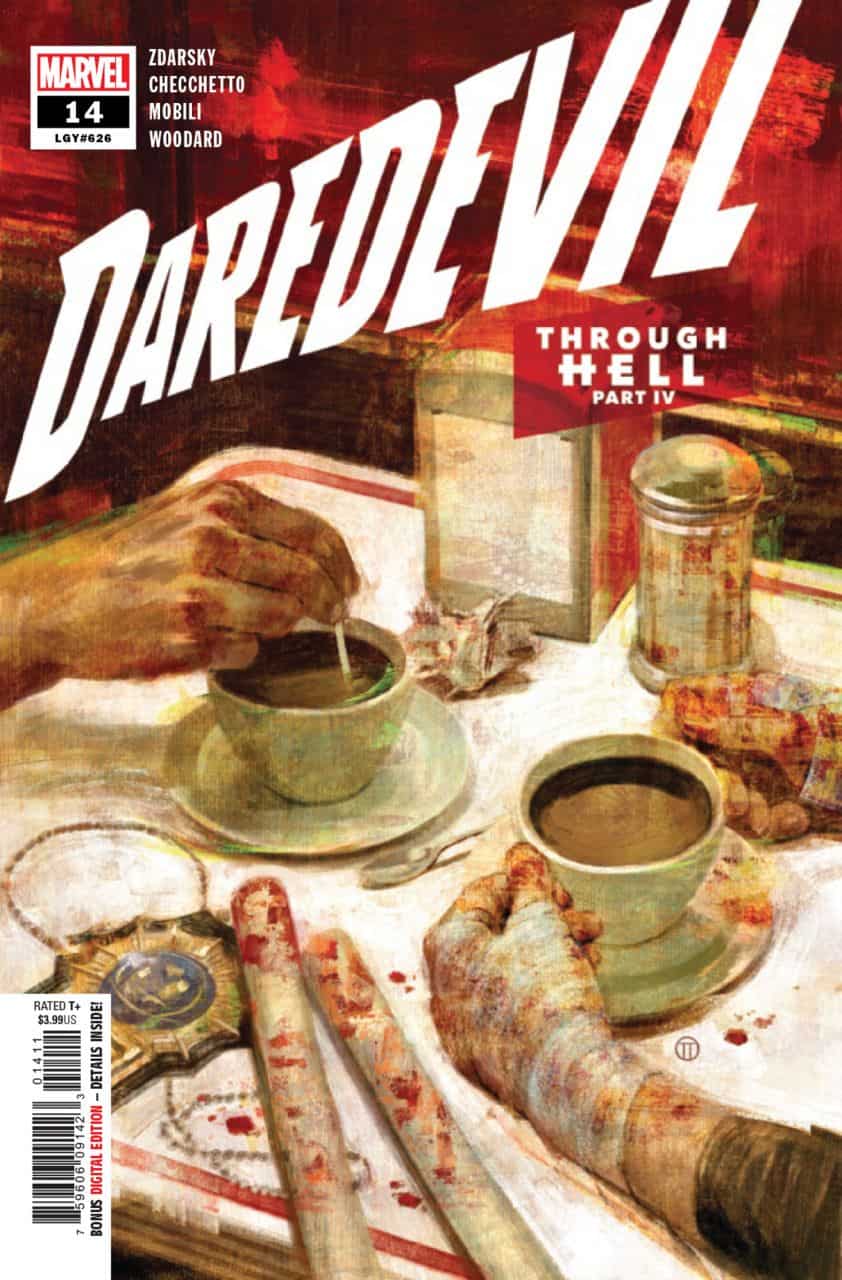 Daredevil #14 – Chip Zdarsky takes DD further along his road to redemption, as he tries to work with the police officer who has been hunting him, and also decides to broaden his scope in how he goes about his business.  We also see more problems on the road for Wilson Fisk, and again, Zdarsky makes Fisk the most interesting character in the comic. This has been a very impressive run, and I’ve stayed pleased with it.

Die #10 – Ash returns to the centre of the story, as she arranges a quiet coup in Angria, setting the series down a newer path.  It’s clear that Kieron Gillen is holding back some key pieces of information about Ash and some of the other characters, as this book becomes richer with each new issue.  It’s going on hiatus for a little while, but I’m looking forward to seeing where this title is headed next.

Doctor Doom #3 – I’ve decided to add this series to my pullfile, as the first two issues were much better than I’d expected.  This one has Doom facing Mephisto, after he was shot in the head, while an assassin comes for Victorious in Latveria, and the nation of Symkaria make their move.  Christopher Cantwell has tossed a lot of balls in the air with this series, and manages to work in appearances from the Blue Marvel and Kang the Conqueror that help keep things moving.  What I like best is the vision of Doom being the person who saves the world from itself in a few years. Doom’s always worked best as a conflicted hero, so I like that Cantwell appears to be moving in that direction. 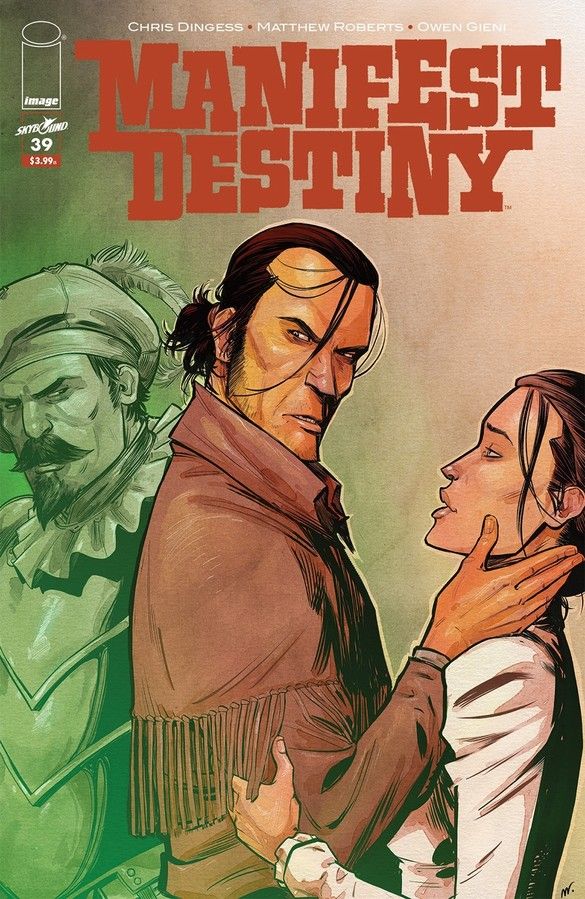 Manifest Destiny #39 – As the Lewis and Clark expedition continues to make its way across the countryside, the ghost Maldonado does his best to increase division between the two men.  A new arch is spotted, which never ends well for the crew, although I was surprised by what came out of the forest. This series never disappoints, although I’m starting to wonder how long it is going to take them to reach their destination.

Marauders #3 – I think I might be off the fence with this title, and I’m landing on the same side as my pull-file.  I haven’t loved this title, but I’ve been curious as it marries mutant intrigue with business, piracy, and some of the shadier aspects of the Krakoan nation.  This issue focuses on Sebastian Shaw, a character I’ve long liked, and his relationship with his son, who I never have. The assertion that Krakoan drugs can really only extend human life by five years is an odd one, and I’d like to know more about how the various drugs, which haven’t really been discussed since the first issue of House of X, are going to change human society.  This book is starting to feel like it’s being written for the long term, and that makes me more interested. I hope I’m not wrong to trust this one. 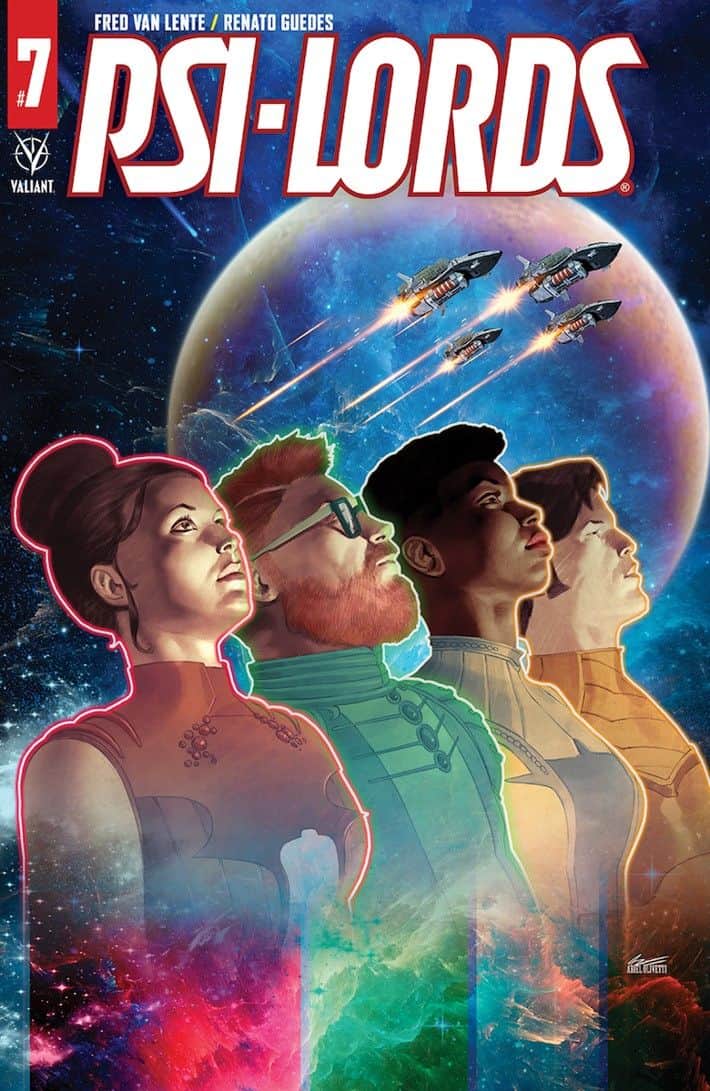 Psi-Lords #7 – X-O Manowar shows up as things start to look really bad.  Our heroes’ attempt to save the solar system gets very complicated, as Scion messes up their plans just as the other wardens decide to help out.  Fred Van Lente is telling a pretty odd story with this book, and it took a while to find its feet, but I’m pretty pleased with where the results have been leading.  I think that the next issue is the last one.

20XX #1 – It’s time for a new series from Jonathan Luna, this time joined by writer Lauren Keely, for a black and white series set in a future where melting permafrost has unleashed a new plague on mankind.  This disease only has a 1% survival rate, but the people who do survive gain limited telekinetic abilities. Meria is a young woman living in Alaska, who comes down with the disease on the same day she is due to finally get the promotion she’s been wanting for years.  Not unexpectedly, she survives her illness, and now has to adjust to life as a sym. These people are persecuted and excluded just about everywhere, and Mer goes looking for her cousin, the only other sym she knows. He’s involved in some crazy looking gang stuff though, so when she finds him, she also finds trouble.  I’ve been a fan of Luna’s work for a long time now, and always enjoy the ways in which he uses science fiction or fantasy to explore society. This book looks promising.

X-Men #3 – This issue was pretty unexpected.  A group of septa- and octogenarian horticulturists, called Hordeculture, has managed to hijack Krakoa’s teleportation system, and Cyclops, Emma Frost, and Sebastian Shaw are sent to investigate.  Again, Jonathan Hickman displays a more humorous touch than is usual for him, as characters trade quips. I was also surprised to see that nothing more was done with the other island that joined Krakoa last issue.  It feels like Hickman is laying out a much larger story, and giving us mere glimpses of some of the areas things may go in, but is holding everything close to the chest. I enjoyed this issue, but found it odd that it made no reference to the events of some of the other X-titles, most notably the death of Charles Xavier.  Still, I’m starting to get used to the approach being taken in this book, and I like it. I also like that the cast appears to be rotating, with the exception of Scott. One last point, I think it’s strange that Selene is living on Krakoa, helping the other mutants, but we also know that she’s been causing problems in Captain America.  The two stories don’t coexist well. 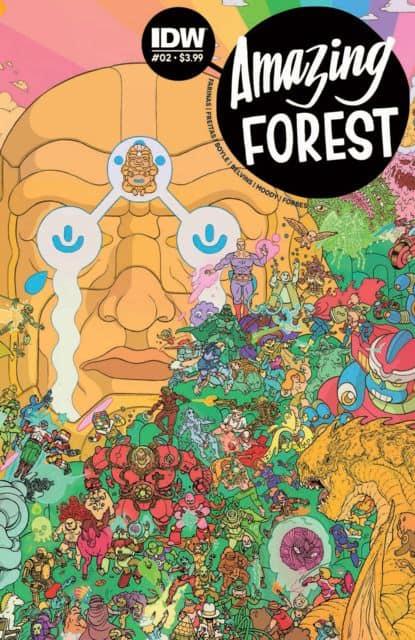 Amazing Forest #1-6 – Ulises Farinas and Erick Freitas have some incredibly creative minds, as showcased in this anthology series featuring work by a wide variety of artists.  These stories are wild and unexpected, often featuring ironic twists at the end. There are some great comics in here, although I would have liked to see more of Farinas’s art.