Serial killers are hot again. If you watch anything on Netflix, the “algorithm” will swear that the next show you should watch should involve a mass murderer with a calling card. Watch the Jeff Garlin comedy special and the next thing the streaming service wants you to view is The Confession Killer on Henry Lee Lucas. How many times have you been supposed to watch Ted Bundy’s confession tapes? So it makes complete sense that Lars Von Trier would dip into the world of the serial killer for The House That Jack Built. The film has Matt Dillon (The Flamingo Kid) recount his work as a killer. When Jack played theaters, a few places ran both the un-rated Director’s cut and the MPAA “approved” R-rated version. Luckily if you get the Blu-ray in February, there’s no choosing which cut because you’ll get both. Here’s the press release from Scream Factory: 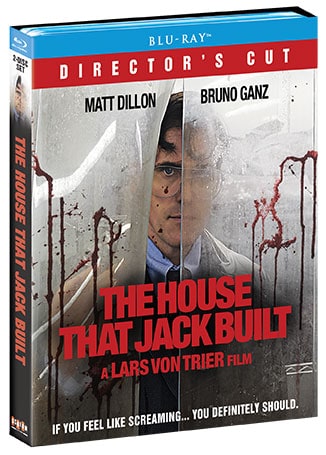 “One of the most thoughtful, honest onscreen meditations on morality and personal culpability in quite some time.” – Andrew Lapin, NPR

A Lars Von Trier Film
The House That Jack Built

Director’s Cut of the Shocking Thriller Makes its Blu-ray and DVD Debut February 4, 2019 from Scream Factory

Boundary-pushing cinematic visionary Lars von Trier (Antichrist) returns with The House that Jack Built, one of his most daring, masterfully provocative works yet. Making its Blu-ray and DVD debut February 4, 2019 from Scream Factory in conjunction with IFC Films, the two-disc release contains both the director’s cut and the theatrical cut of the film, as well as an interview with director Lars Von Trier as a bonus feature, as well as the theatrical and teaser trailers. Fans can pre-order their copies now by visiting ShoutFactory.com

In five audacious episodes, failed architect and arch-sociopath Jack (Matt Dillon) recounts the elaborately orchestrated murders — each, as he views them, as a towering work of art — that define his “career” as a serial killer. Mixing pitch-black humor, transcendent surrealism, and renegade musings on everything from history to architecture to cinema itself, von Trier fashions a radical, blazingly personal inquiry into violence, art, and the twin acts of creation and destruction. Uma Thurman, Riley Keough, and Bruno Ganz (Wings of Desire) co-star.