Back in the early ’80s, Richard Pryor was one of the cinematic kings of comedy. They even teamed him up with Superman. During his Hollywood heydays, he was teamed up with John Candy (SCTV) to remake a classic film: Brewster’s Millions. The premise was simple which was why it was constantly remake. Pryor has a chance to inherit a fortune, but there’s a catch. Unlike the other weird wills that demanded you sleep overnight in a haunted house, Pryor had to only do one simple thing: Burn through 30 million dollars in 30 days. The film came out in 1985 when it was harder to burn through $30 million since you couldn’t invest in Uber or any other start up that sets cash on fire to disrupt the world. Brewster’s Millions is noted for being the only outright comedy ever done by Walter Hill (The Warriors & 48 Hours. Now the film is coming out from Shout Select with one of the earlier versions so you can enjoy the timeless plot device. Here’s the press release from Shout! Factory: 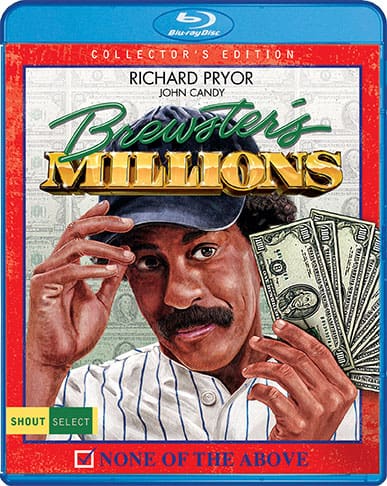 Montgomery Brewster Has 30 Days To Spend $30 Million … What Could Go Wrong?

Minor league baseball pitcher Montgomery Brewster (Richard Pryor, Car Wash) gets the surprise of his life when he learns a rich, distant relative has died and left him his entire fortune. But there’s a catch: he must spend $30 million in 30 days as a condition of receiving his real inheritance of $300 million. And to complicate matters, he can’t tell anyone why he’s “throwing away” all that cash … or he will forfeit everything! With the help of his pal Spike (John Candy, Spaceballs), he sets off on a frantic spending spree the likes of which would bring any self-respecting accountant to their knees.

Based on the novel by George Barr McCutcheon, Brewster’s Millions has been adapted for the stage, television, radio, and more than ten times as a film the world over. Also starring Lonette McKee (Malcolm X), Jerry Orbach (Law & Order), Pat Hingle (Batman), and Hume Cronyn (Cocoon), Brewster’s Millions is a classic screwball comedy that throws plenty of curves and knocks it out of the park.