You can never know how a minor event or choice can change your entire life. Sometime they go unnoticed. Other times you get told years later at how you misplayed a moment. You think back at how if you’d done “the right thing” you’d be a different person. Sliding Doors explored this idea in the sense of making the subway or standing on the platform back in 1998. Gwyneth Paltrow gets to play the same character two ways as we see how her life could have gone at a crossroads that didn’t seem that important at the time. Now the film is coming out as a Collector’s Edition from Shout! Factory as the 100th title in the Shout Select series. Even more interesting is a feature length documentary exploring the film and the concept. Here’s the press release from Shout! Factory with all the information on the bonus features: 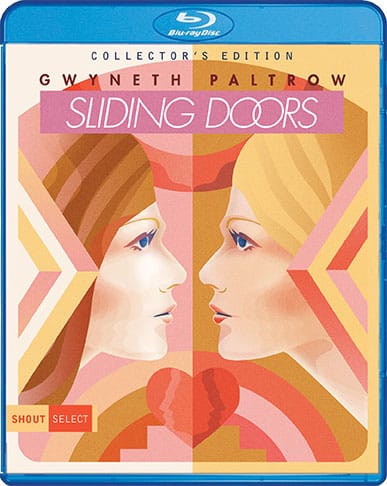 Los Angeles, CA – Sliding Doors [Collector’s Edition] is coming to Blu-ray™ on January 21 from Shout! Select, marking the line’s 100th release. Special features will include a new audio commentary with writer/director Peter Howitt, a new feature-length documentary titled “The Sliding Doors Moments” – looking back at the making of the film; including exclusive home movie footage and brand-new interviews with Peter Howitt, stars Gwyneth Paltrow and John Hannah, and more, and the new “A Stroll Through Sliding Doors London” with Peter Howitt.

The split-second moments that can take a life down one path instead of another form the tantalizing what if? in this delightful romantic comedy starring Gwyneth Paltrow.

Paltrow plays London publicist Helen, effortlessly sliding between parallel storylines that show what happens if she does or doesn’t catch a morning train back to her apartment. Love. Romantic entanglements. Deception. Trust. Friendship. Comedy. All come into focus as the two stories shift back and forth, overlap, then surprisingly converge in “the most provocative romantic comedy in years” (Stephen Farber, Movieline). John Hanna, John Lynch and Jeanne Tripplehorn co-star.