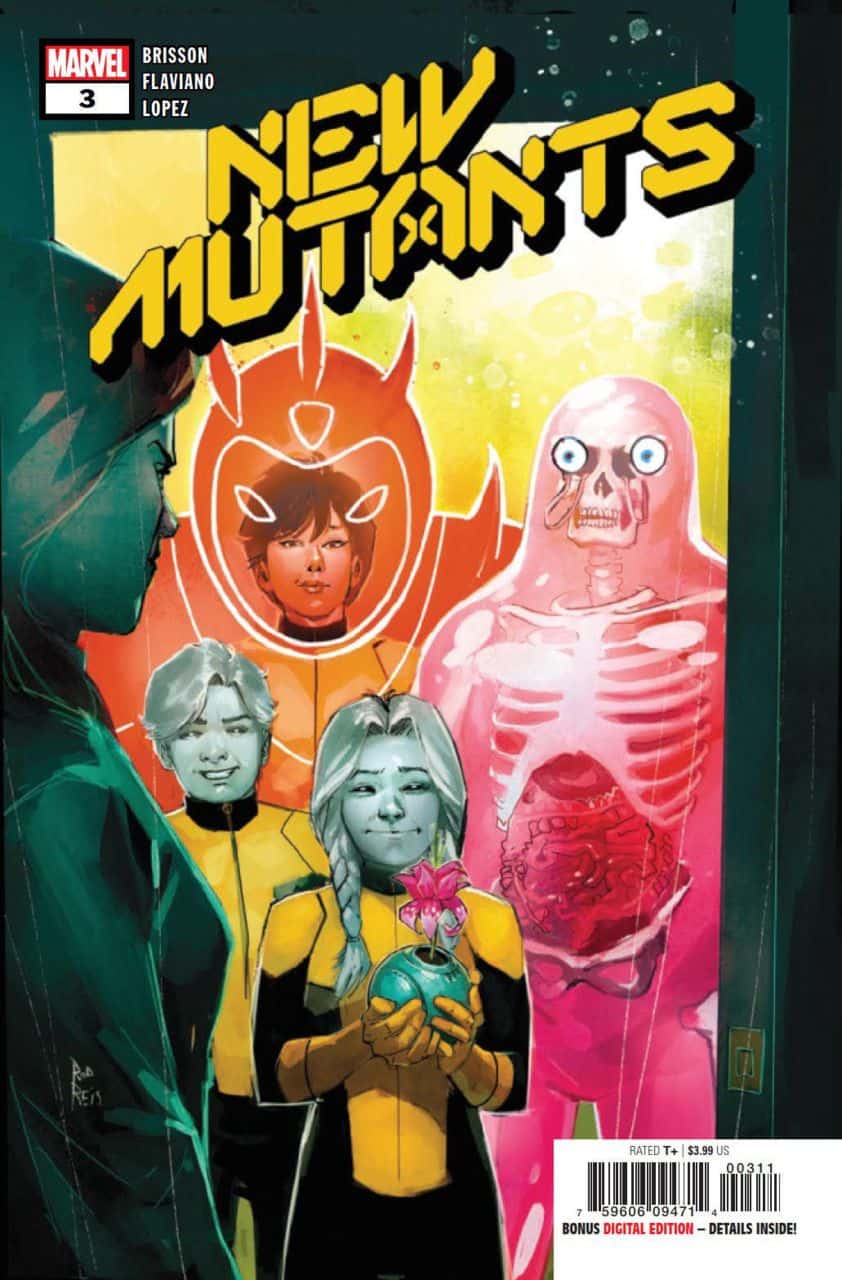 New Mutants #3 – This is what I’ve been waiting to see from the Dawn of X titles.  Armor starts wondering about some of the other mutants who haven’t yet come to Krakoa, and decides to start looking for them.  She starts with Beak and Angel (who to be honest, I don’t remember her ever spending time, given that they were central to Grant Morrison’s era, while she didn’t appear until Joss Whedon’s time), and figures out what might be keeping them from moving to the island.  She pays them a visit, with Glob Herman and the two French kids that Ed Brisson, the writer of this issue, debuted in his Extermination event, and of course, something bad happens. We also see what Boom Boom’s up to with the rest of her friends in space, as it looks like this series is going to alternate between the adventures of the classic New Mutants team (by Hickman and Reis), and the adventures of actual Newer Mutants (by Brisson and Flaviano).  Since this book comes out twice a month, I’m good with that, as it really makes this into two different series that will overlap, I’m sure. Brisson is so good at this kind of thing, and Flaviano’s art is pretty nice. This also makes it more likely that Reis will be able to draw the entire story featuring the classic crew. It’s about time we get to see more of what life is like on Krakoa, although I’m surprised to see that the ban on teleporting is lifted (these Krakoan gates need to be better explained, because it looks like our heroes are able to just show up in Nebraska, despite the fact that there is no gate there). 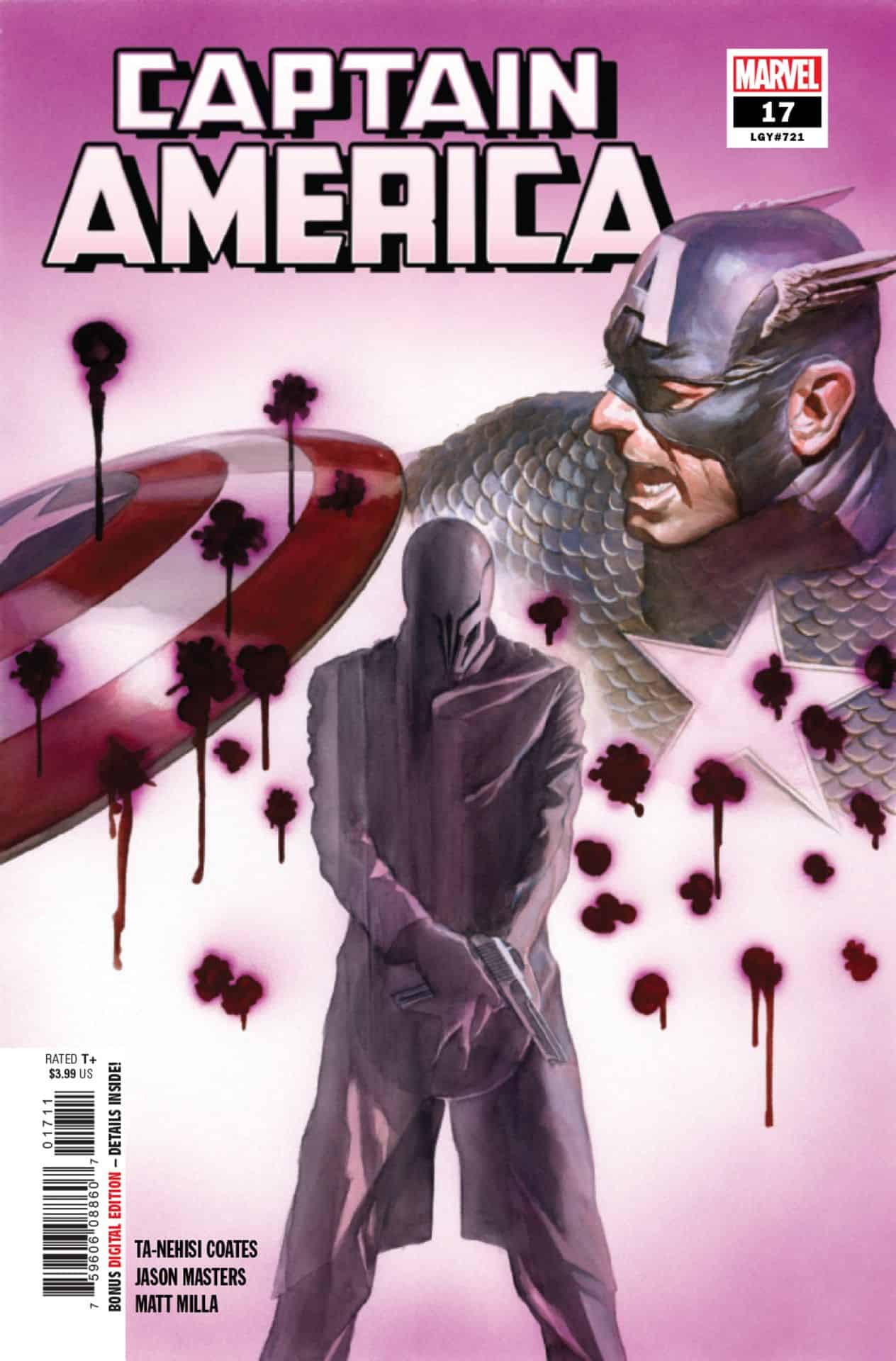 Captain America #17 – Cap and Misty continue to investigate Scourge, and gain some clarity into the nature of his mission.  There’s a lot going on in this book right now, and I like that. Jason Masters’s art is a little stiff in some of the action sequences, but generally this book is really working well lately.

Deadly Class #42 – Things are getting tougher and tougher for Marcus and his friends.  A class party at a chalet goes as well as those things ever do, with a couple of murders tossed in for good measure.  I don’t want to say that this series is starting to feel a little tired, because I’m a big fan of it, but I do feel like Rick Remender is both building towards a big finish, and circling back on familiar material at the same time.  I think this title needs a shake up.

Doctor Aphra #40 – I’m not sure what’s more surprising, that Aphra managed to land a forty-issue run in this current comics climate, or that the series is being relaunched in a couple of months with a new creative team.  I grew to love Aphra during Kieron Gillen’s Darth Vader run, and was thrilled to see her get her own title. When Gillen left, Si Spurrier took over seamlessly, and continued to make Aphra the most compelling new character added to the Star Wars universe in this century (I’m including the prequel movies and the current crop as well).  This issue wraps up a number of long-running plotlines very nicely. I don’t know the new creative team, but I hope they build on the strengths of this run. 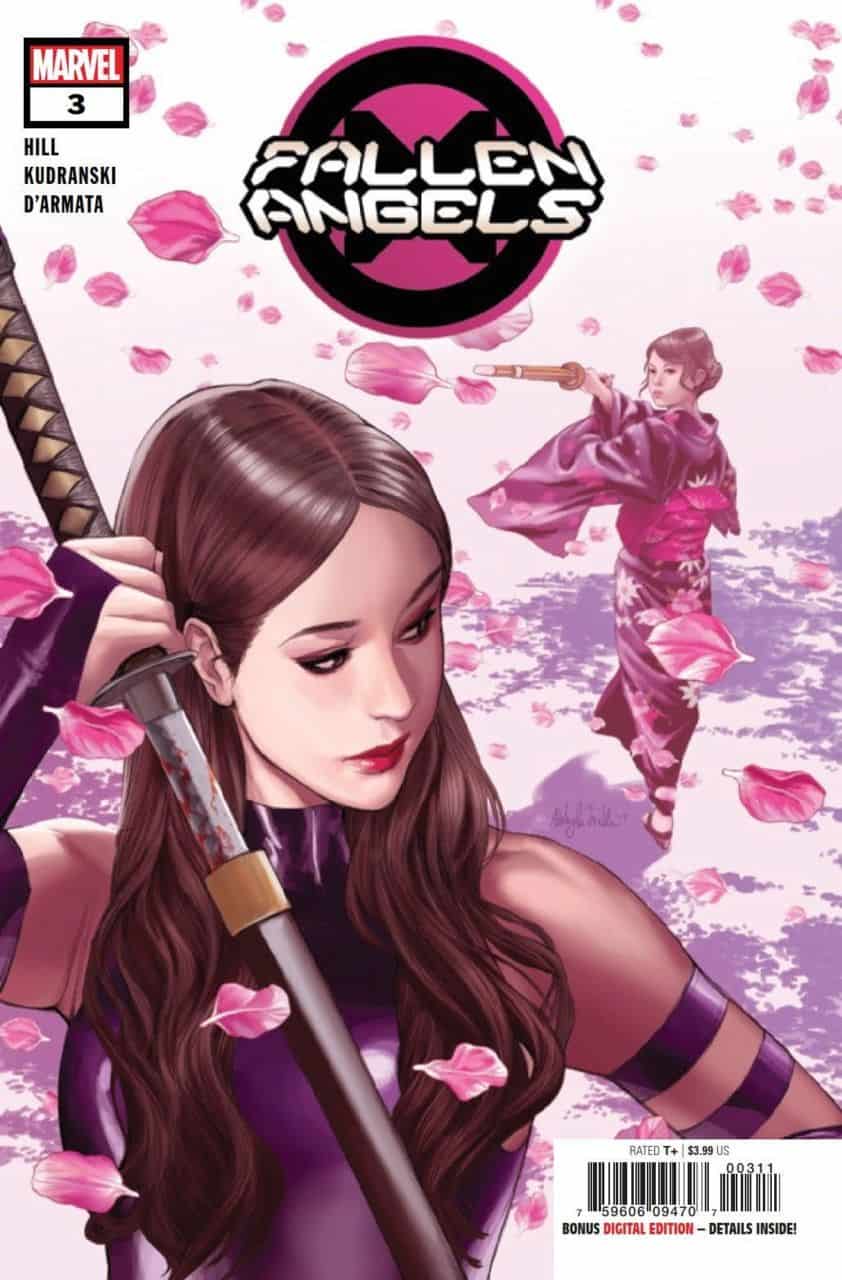 Fallen Angels #3 – Knowing that this was the first of the Dawn of X books to be canceled does take some of the interest out of it, as I know that Bryan Hill is going to be wrapping up this story in a hurry now.  The three mutant stars (Psylocke, X-23, and Cable) fight a big robotic thingy at the site of an Overclock factory, and one of them gets abducted by Apoth, the series’s big bad. Szymon Kudranski’s art keeps this book interesting, but knowing that Hill won’t have enough space to really dig into these characters is frustrating.  Really though, I kind of knew that this title was the weakest link in the lineup…

Gideon Falls #19 – this series is moving kind of quickly now, but at the same time, it’s starting to lose my interest.  I think now that we know that the Black Barn has released a fairly typical demonic-type creature into the world, I’m not as intrigued.  Still, Andrea Sorrentino’s art more than makes up for any other shortcoming this title might have.

The Immortal Hulk #28 – Al Ewing spends more time digging into how people are reacting to the new anti-Roxxon stance the Hulk has been taking.  We get to know a security guard who watches over a remote Roxxon facility, and see the protesting “Teen Brigade” through his eyes. We also see what Dario Agger, the Minotaur, intends to do about his mounting problems.  There are two guest artists on this book – Tom Reilly and Matías Bergara, and both are terrific. I think it’s Bergara who drew the Agger sequences, and they are gorgeous. I’d like to see more of his work soon. 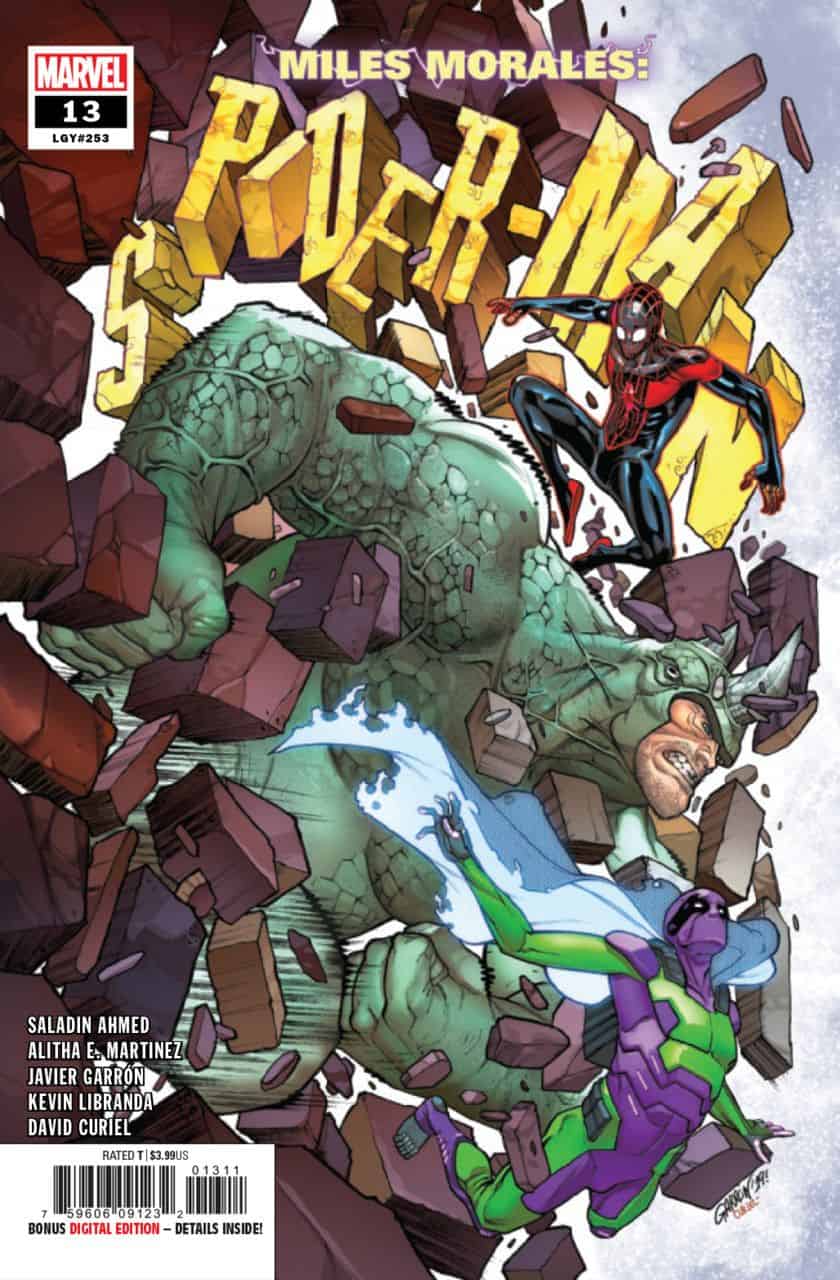 Miles Morales: Spider-Man #13 – Miles has to help his uncle get to Brooklyn, while any number of supervillains are looking to kill him.  Saladin Ahmed works some good character moments into this issue, and it looks great, even with three different pencillers at work on it.

Nobody Is In Control #3 – It’s been a long time since we last saw an issue of this excellent Black Mask series that combines multiple conspiracy theories with a walk through the woods.  A retired conservative radio host has ended up travelling through his wooded region with a man who claims to be on the run from the US military, and who is a fount of strange information.  Patrick Kindlon keeps this bizarre series feeling very unpredictable yet relatable, and artist Paul Tucker continues to do very cool things to keep this series visually interesting. This issue pays homage to manga (including some pages read from right to left) and the Berenstain Bears.  It’s a cool title, and I’m glad to see that Black Mask hasn’t completely disappeared from the comics shelves.

Oblivion Song #22 – One of the Faceless Men is taken prisoner, and so we finally learn that they call themselves Kuthaal, and that conversation with them is not all that easy or rewarding.  Robert Kirkman is moving this series into a few new directions, as the army finally launches their rescue mission, while the human working with the Kuthaal decides to help Ed’s wife and baby.  It’s another very good issue, with great art by Lorenzo De Felici.

Rai #2 – I think I’m definitely hooked on this new Rai series.  Rai and Raijin track one of the Offspring (the Father backups they are on a quest to destroy) to a beautiful home which is run by an AI that doesn’t want them to leave.  Dan Abnett is playing with some interesting ideas here, and Juan José Ryp’s art is the best he’s ever done.

Shoplifters Will Be Liquidated #3 – The other Patrick Kindlon book I read this week isn’t as strong as Nobody Is In Control, which feels a lot more thought out.  This series is amusing. It’s about a loss prevention specialist working for a massive Wal-Mart-like corporation, who has discovered a whole world beneath the store, living off of stolen goods.  That part of the story is confusing, as there seem to be various communities down there that don’t seem to know much about one another, and it’s a bit hard to follow. The best parts of this series deal with the store itself.  Its suicidal CEO wants to sell the right to end one’s life, and a pair of executives scheme to take over. If the whole book were about them, I’d probably be a lot more interested. Part of the problem is that the colouring in the underground parts make the action and art hard to follow.

Star Wars: Target Vader #6 – Robbie Thompson wraps up his bounty hunter miniseries quite well, as Valance tracks down the Hidden Hand, and then executes a quick betrayal or two.  I’ve liked this series, and would like to see more books set in the Star Wars universe that are simply adjacent to the main event characters. A Valance ongoing series, like Doctor Aphra’s, is way more interesting to me than another Darth Vader ongoing.

Trees: Three Fates #4 – Warren Ellis keeps this comic moving a little too quickly, as a murder, and the murderer, are discovered, and it looks like the main character has a bit more of a connection to the Trees than we’ve seen before.  This issue only took a few minutes to read, and I don’t have a lot more to say about it.

Undiscovered Country #2 – This bizarre series by Charles Soule, Scott Snyder, and Giuseppe Camuncoli gets even more bizarre as we start to get the lay of the land in the sealed off and very changed United States.  We also start to get to know the characters a little better, and learn that some of them (probably all of them) are hiding things. This book is deeply weird, but I kind of love it, and look forward to having a lot of things explained.

Valkyrie: Jane Foster #6 – Jane receives word that Death is dying, which is a bit of a metaphysical condition, so she gathers a team of Doctors – Dr. Strange, the Night Nurse, Cardiac, Dr. Faiza Hussain, and Alpha Flight deep cut Manikin – to help her figure out what’s going on.  I love when we get to check in with C- and D-listers, so this issue made me happy.

X-Force #3 – With the last issue, I was saying that this book needs to better make the case for what makes it unique among the other X-Men titles.  We reach that point this issue, as the X-Force name finally gets spoken, and we see who is going to be on the team, and what its purpose will be. I would like to know a little more about the organization they are up against, which feels a little modelled on the Court of Owls and its Talons at this early stage.  I still have a lot of questions about the resurrection protocol that the mutants are following, and just who needs to be around to make it work. I’m enjoying this book, and Ben Percy’s writing on it, and am comfortable sticking with it for a while.

Batman and the Outsiders #8

Black Panther and the Agents of Wakanda #4

Dark Knight Returns: The Golden Child #1 (only for Grampá’s art!) 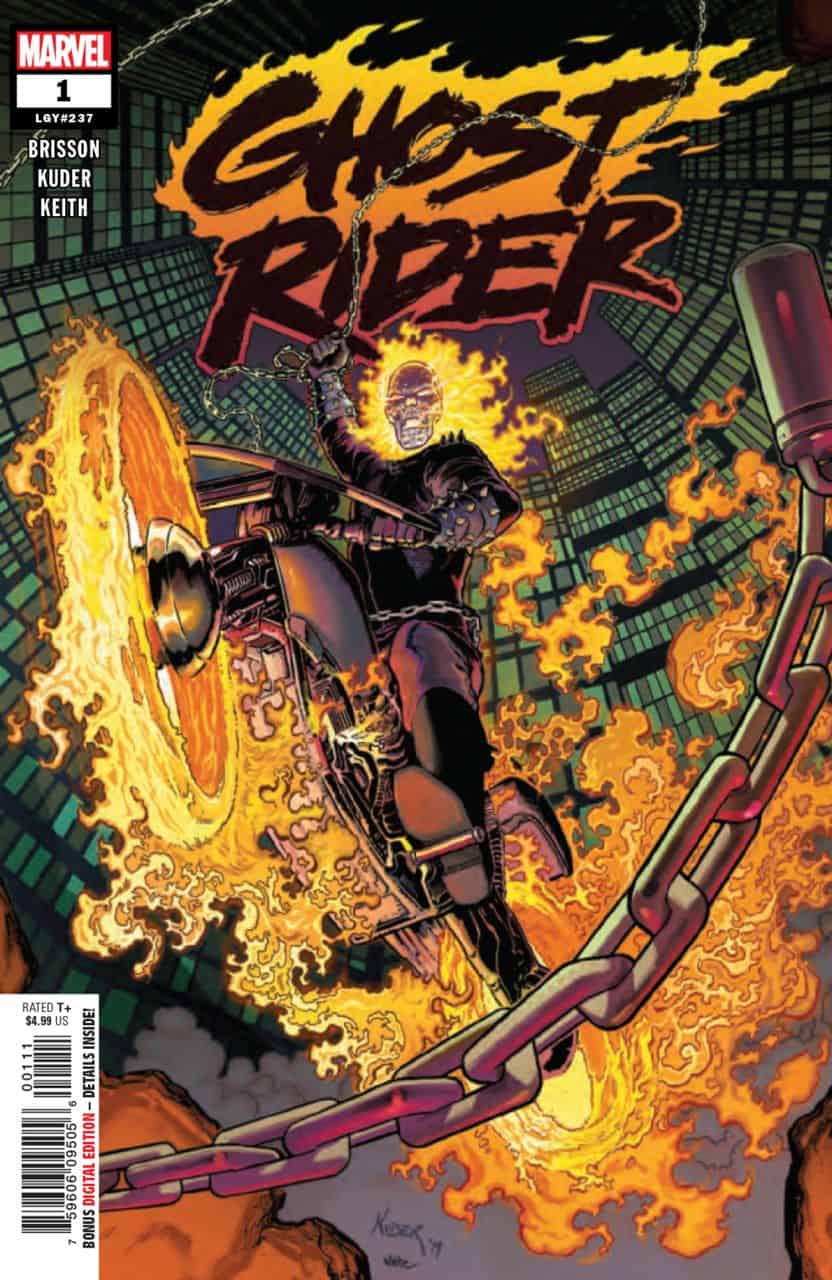 Ghost Rider #1&2 – I am always going to be curious to check out a new comic by Ed Brisson, but this one is not for me.  I’ve never been a big Ghost Rider fan, and I hated Danny Ketch’s ascendancy in the 90s, so the fact that this title appears to be balancing its time between Johnny Blaze and the very unhappy Ketch didn’t excite me much.  The idea of Blaze’s new role as ruler of Hell is interesting, especially as we see how it’s corrupting him, but I don’t think I’m intrigued enough to return for more. I might give this one more issue, on the strength of Brisson’s name though.