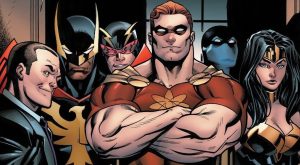 …More Return, But Are They Avengers Enemies Or Allies? Solicitation and cover below.

What do the King of Atlantis, the Lord of the Vampires, the deposed duke of Hell, a mysterious Russian assassin and the secret boss of Washington, D.C.’s greatest super-team have in common? They all really hate the Avengers. And so there came a day, a day unlike any other, when Earth’s mightiest villains found themselves united against a common threat.