Bachelor parties are a great event for making serious bad decisions. People act like it’s the last bit of freedom that the groom will ever get to experience before the wedding. As the booze and other party favors kick in, good judgement is thrown out the limo window. This is exactly what happens in Very Bad Things when Jon Favreau (Iron Man) is somehow going to marry Cameron Diaz and gets taken to Las Vegas to party down. Very Bad Things gets upgraded to Blu-ray with new bonus features as part of the Shout Select line. Here’s the press release from Shout! Factory about the release: 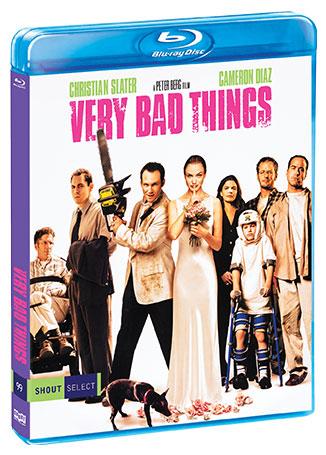 Kyle Fisher (Jon Favreau, Swingers) has one last night to celebrate life as a single man before marrying Laura (Cameron Diaz, There’s Something About Mary), so he sets out to Vegas with four of his best buddies. But their swanky, drug-and-alcohol-fueled bachelor party goes bust when their “stripper” cashes in her chips during a deranged sexual escapade. And hers is just the first of the bodies to pile up. The five friends decide to bury the evidence … but fate has a way of not letting the truth stay buried for long.