Breaking The Codes To TWO Major Deaths That…

That includes a new cosmic type event called Empyre renamed A4: Empyre (full spoilers here) that also is tied up in the murder mystery of Incoming #1 and a code that requires decoding.

The Masked Raider starts off the mystery and ropes in Daredevil and Elektra who rope in Jessica Jones; she in turn brings in half Kree / half human Captain Marvel due to the Hala star symbol included in the codes.

…and then tries Marvel’s younger Illuminati who are investigated the mystery around the Masked Raider.

However, the first part appears to be a hexadecimal computer code; so not 2faced, but Base 10. However, the kids can’t decipher the presumed numeric hexadecimal…

…nor can a returning Ares and his Asian hero allies.

Iron Man 2020, Arno Stark, is also asked about the second part of the codes; he determines the numeric code is not machine code. However, he just answers that question he was asked. He didn’t volunteer that the numeric code is a cypher for a three word message. So, Arno Stark is a d*ck in that fine Stark tradition.

Here the murder mystery converges with the codes mystery as Fantastic Four brain Mister Fantastic Reed Richards reveals the dead body that kicks off Incoming #1 belongs to Bel-Dann who in the past had waged war with his Skrull counterpart Raksor.

Along with Dr. Jane Foster aka Valkyrie decipher that three word code as Beware The Trees; and the Hala star symbol does not refer to Captain Marvel, but Kree warrior Bel-Dann.

…Raksor who it turns out was now allies with Bel-Dann?!

However, what appears to be trees sprout out of Raksor killing the Skrull warrior.

The book ends with the heroes knowing there is a more to these deaths than meets the eye.

It is no longer a Kree / Skrull War, but a Kree and Skrull united people together… 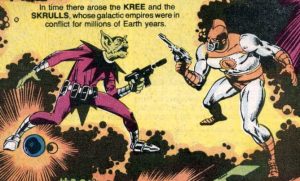 …against Earth as all roads lead to A4: Empyre?