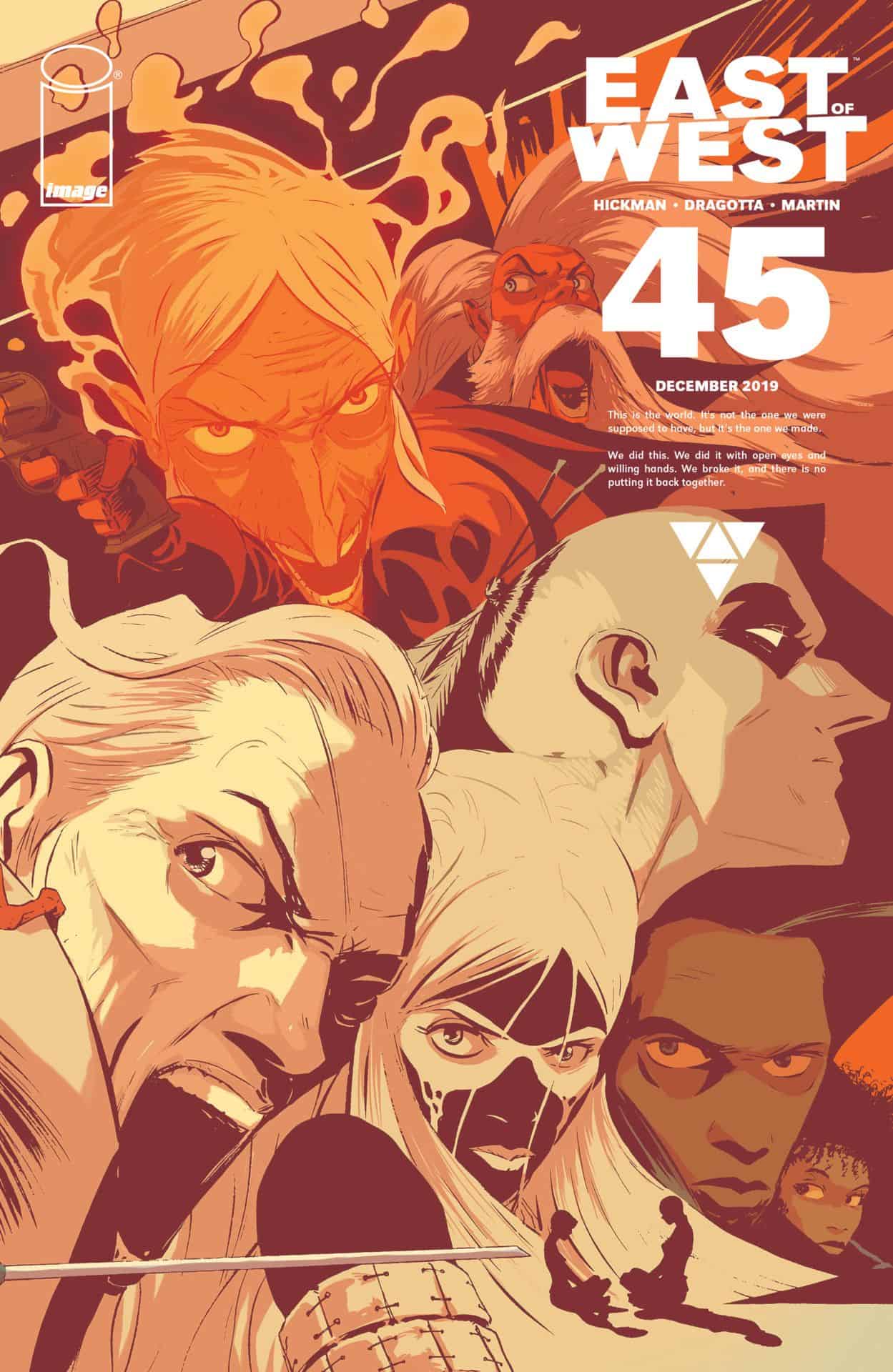 East of West #45 – I think it must have slipped past me that this title was ending this month, but here we are.  Jonathan Hickman and Nick Dragotta have been publishing this book since the spring of 2013, and bring it all to a close quite beautifully in this issue.  Death squares off against the other Horsemen in a big battle. Wolf decides how to take on the mantle of leadership, and new pacts are made among the survivors of the various wars and conflicts that have been fueling this series.  Most importantly, Babylon is forced to confront the world as it really is. Dragotta’s art is fantastic throughout this issue, and I was pleased and intrigued to see that he has a new title, Tramp (about ocean-going shipping, apparently) coming out in the new year.  I’m going to miss this title, which has been pretty random in its shipping, and many of these characters. I would love to sit down and reread this whole project from beginning to end, as it’s been an incredible example of intricate plotting. 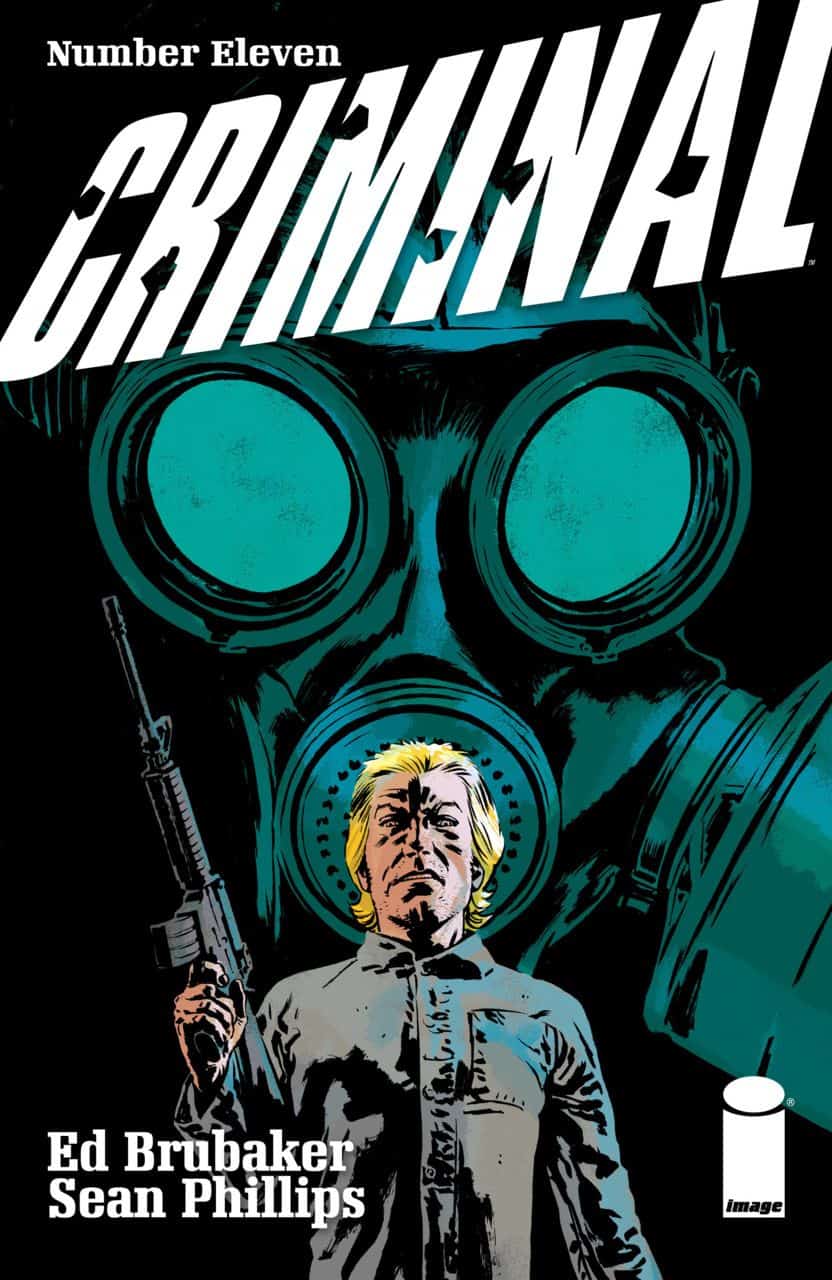 Criminal #11 – After months of hearing bits and pieces of the planning, it’s time for Teeg’s big heist.  I love heist scenes in movies and comics, and the excitement that comes from watching a plan get put into action, and then riding along as the players ride out any complications that come their way.  Because there are always complications. The thing is, there’s no way that Teeg could have expected the one that comes at the very end of the issue. Once again, Ed Brubaker and Sean Phillips have put together a masterclass of a comic, and I’m very excited to see the end of this arc next month.

Outcast #43 – Robert Kirkman and Paul Azaceta are moving towards the end of this series, in another five issues, I believe, and as such, we see just about everything accelerate in this issue.  There are many more beings coming through and possessing people in our world, causing a lot of chaos in the streets of Rome. At the same time, Kyle’s ex has been changed too, but what’s going on with her is not the same kind of thing.  Kirkman’s built a lot of character arcs into this series, and as we get towards the big finish, there’s a lot of things converging (that’s a pun, if you read the title). It’s exciting, but due to the recent hiatus this book was on, it took me most of this issue to get back into the swing of things. 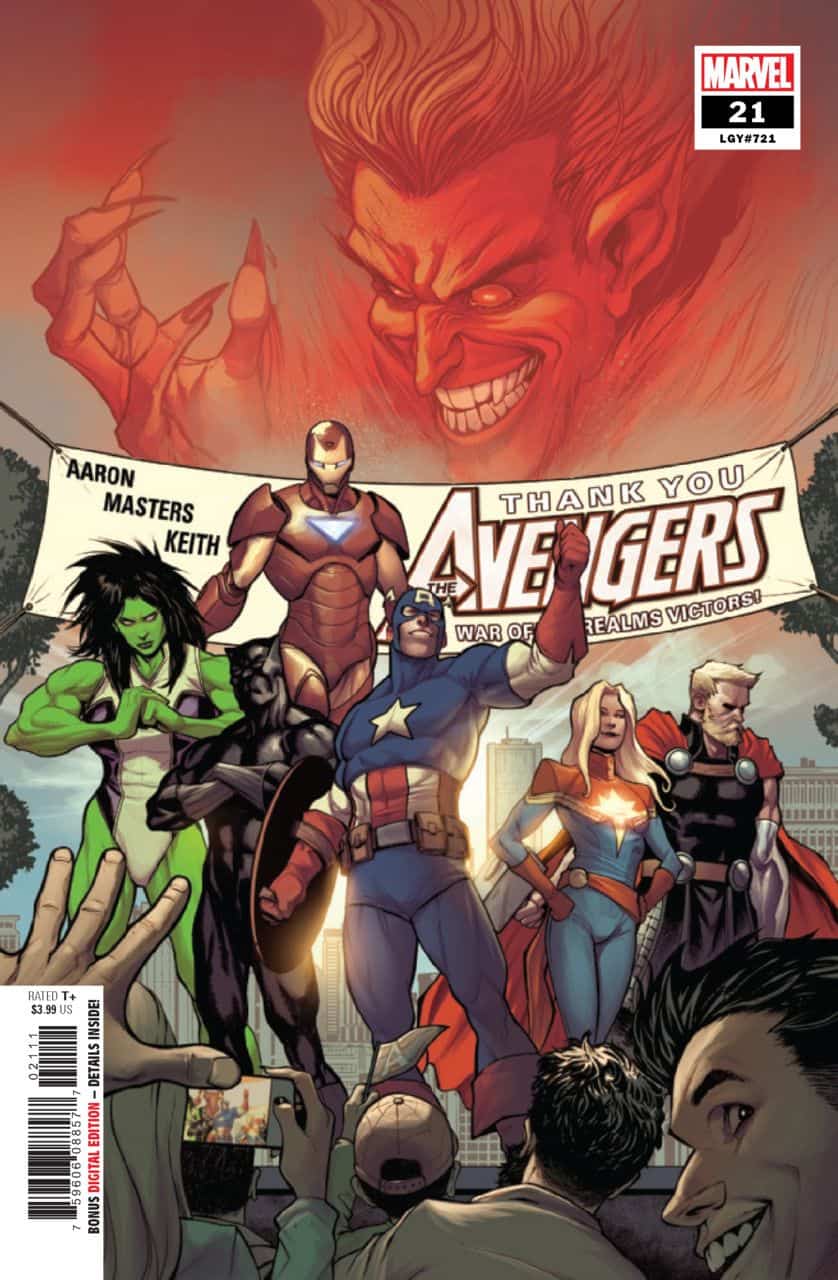 Avengers #21-25 – These issues include a between-arc issue that has the Avengers relaxing a little after the War of the Realms, and is followed by the Challenge of the Ghost Riders, which does a lot to help Robbie, the current Ghost Rider, grow into his role as both a hero and an Avenger.  I think Jason Aaron has a good handle on this book now. I didn’t think that when his run started, but now he’s got the group dynamics down, and writes characters like the Black Panther, She-Hulk, and Captain America very well.

Star Wars: Age of Resistance – Kylo Ren #1 – Kylo Ren is a difficult character to write about, because so far all we’ve seen of him is that he’s petulant and given to temper tantrums.  That’s more or less what happens here, when he’s sent into negotiations with a race of giants that were put down by Darth Vader back in the day. Walking his grandfather’s path is triggering for young Ben, so we see just how far he can go.  It was an alright issue.

Star Wars: Age of Resistance – Supreme Leader Snoke #1 – What is supposed to be a one-shot about Snoke, the cipher of a character at the heart of the First Order, is in fact another one-shot about Kylo Ren learning to rein in his anger a tiny bit.  I’d hope for some of Snoke’s background, or at the least, an explanation as to why the First Order follows him so fervently. I guess he really is just a stand-in for the Emperor, crossed with Gollum. These later Star Wars films really need a little more explanation to them.

War of the Realms: New Agents of Atlas #3&4 – I suppose that Greg Pak has done a fine job of finding reasons to bring these heroes, most of whom are new to readers, having only existed in video games, together.  Amadeus has emerged as a leader, and Jimmy has given everyone a reason to be annoyed with him. It’s a tie-in to a big event, so the big story moments are basically predetermined. I’m curious to see how the regular Agents book (which I’m pretty sure has already been canceled) goes.

Agents of Atlas #1-4 – Greg Pak starts this series off well, but I still feel like I barely know any of the new characters.  Amadeus Cho (I don’t think I’ll ever call him Brawn) and Silk do a lot of the heavy lifting in terms of familiarity, although as the issues continue, there is some space given to a few of the newer characters, Luna Snow and Wave in particular.  I like that the latest Giant-Man came into the mix, and find Isaac Ikeda an interesting character. I still don’t entirely understand the threat posed by this Pan organization, and its CEO, but I’m curious to see where things go. I like Nico Leon and Pop Mhan’s art for this book too.  The connection to the previous Atlas team is something I’d like to see more about, too. 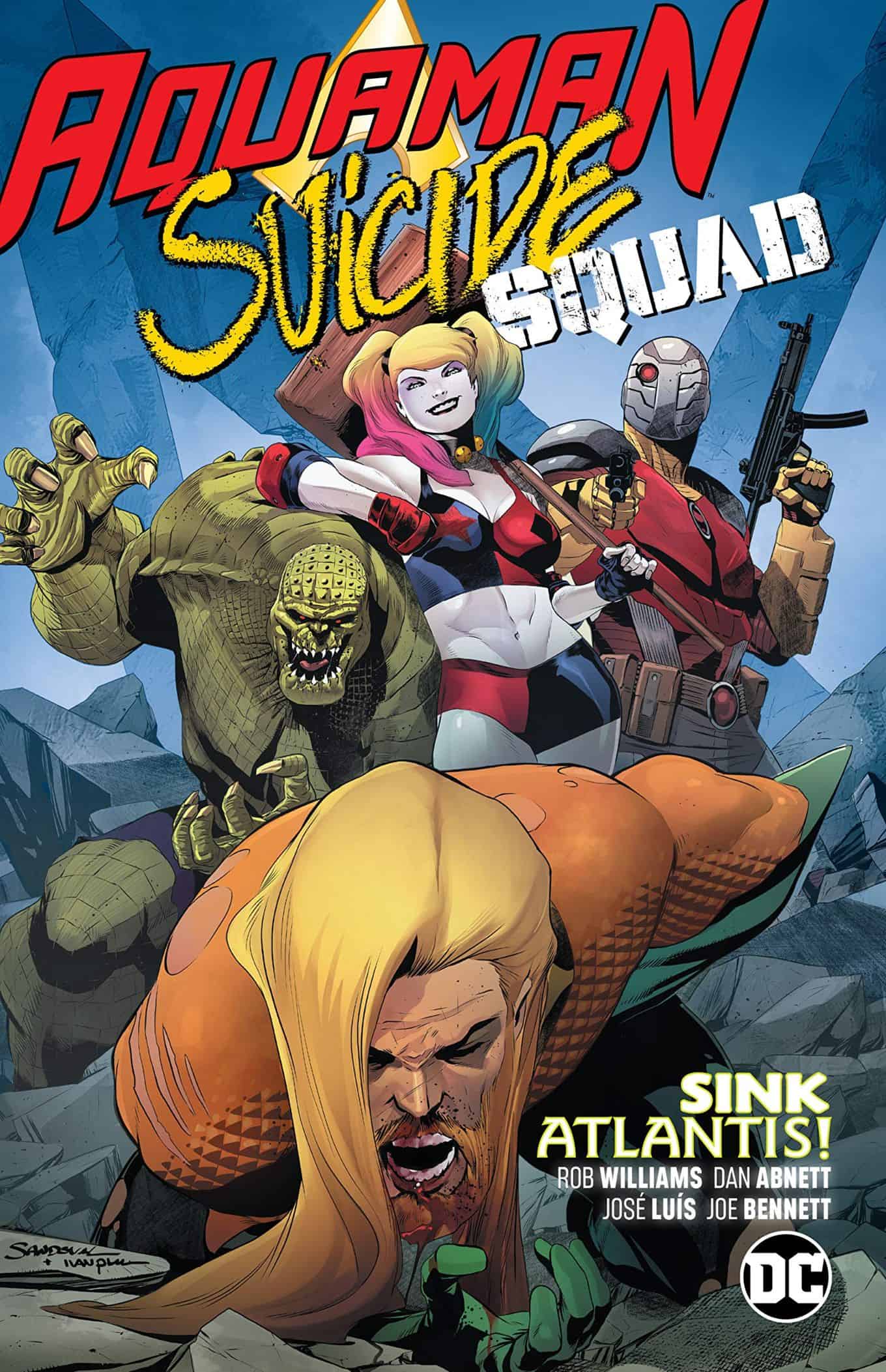 Aquaman/Suicide Squad: Sink Atlantis – It’s strange that Dan Abnett’s time on Aquaman ended with two back-to-back crossovers that also never got collected as Aquaman trades (after this was the Drowned Earth event that was more a Justice League thing than an Aquaman thing).  This four-issue trade (I hate four issue trades!) is decent, with Abnett working seamlessly with then-Suicide Squad writer Rob Williams to deliver a story that has the Squad attempting to sink the newly-sunk Atlantis. I really liked Abnett’s Aquaman run, but have stayed away from the Suicide Squad, mostly because I can’t handle a lot of Harley Quinn.  The art, by José Luís and Joe Bennett also stayed very consistent. This was a decent team-up story, that was about the right length.

I’ve been reading the Pitiful Human-Lizard’s adventures in a few different formats over the last few years.  First, I bought some of the self-published comics directly from Jason Loo at TCAF, and then when the book was picked up by Chapterhouse Comics, I enjoyed getting them from my local comics store.  After Chapterhouse hit some difficulties, the series moved online, and I lost track of it, because I hate reading comics on the computer.  Recently, I saw that Chapterhouse had pulled things together a little, and were releasing most of their catalogue in trade, including this Season Four trade which physically collects the issues that were only published online.  I got the trade direct from Loo (taking things full circle) at a show recently, which is why I’m talking about it before it’s actually officially published.The Pitiful Human-Lizard tells the story of Lucas Barrett, an amateur superhero with the ability to regenerate from any injury.  When we last saw him (in the monthly comic, I’m not counting the special that Loo made to end the title that I got at TCAF last year), Lucas was in space helping Mother Wonder deal with some cosmic stuff.

Now he’s back, but he’s lost his job, and the girl he was talking to is not interested in pursuing things.  Lucas has always been a down-on-his-luck kind of character, and things are starting to look bleak here.  His friend The Majestic Rat has moved away from the superhero world since settling down with his boyfriend.  He manages to get another friend captured by the company that’s been producing, and losing, monsters at a rapid pace.

This book has always had a lot of charm, and that continues here, but these four chapters feel a touch tired compared to the energy of the earlier issues.  Lucas is worn out, but also, maybe, is Loo?  The characterizations continue to be spot-on, but the collaborations with other creators cause this volume to lose some momentum, and the inclusion of Minuit, a Montreal-based hero, feels very random.

What’s missing the most from this volume is the Toronto-centric storytelling that made the first couple of years of this book special to me.  Loo, however, is a very strong emerging talent, and I found that his final PH-L book, Some Heart Left, had 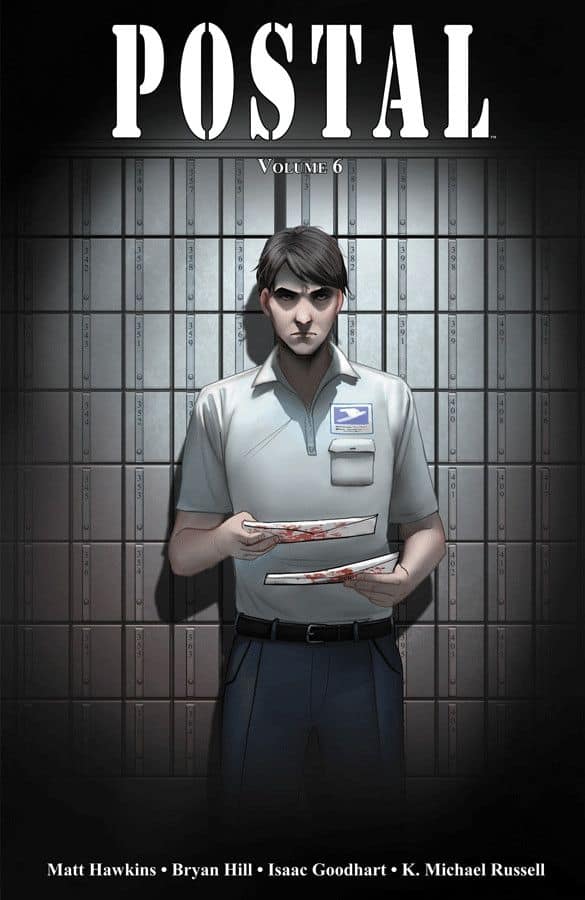 everything that this volume was missing.  I look forward to seeing what Loo’s next project (I know he has something online with Chip Zdarsky) is like.  I believe he’s going to go far.

Postal Volume 6 – It’s taken a while to get to this point, but Isaac, the founder of Eden’s Falls and Mark’s father, finally makes his way into town.  Is Laura, the town’s leader, ready to stand up for him? As usual, this is a very short trade (hey Top Cow, I hate four issue trades), but like every volume of Postal I’ve read, I enjoy it, and can’t stop picturing it as a TV show.