Last WWE Raw Of The Decade Starts Strong With Kevin Owens and Samoa Joe, But Ends Weak With Lana and Bobby Lashley Wedding and Return Of Liv Morgan! 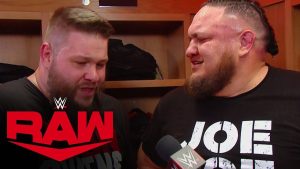 HARTFORD — Will Seth Rollins and AOP continue the rampage they started all the way into 2020? Sure seems like Kevin Owens and Samoa Joe are counting on it. The two Superstars, each of whom ended up on the wrong end of a beatdown from The Architect and his collective last week, seemed more than willing to throw down at the start of the final Raw of 2019, with Owens even going so far as to call out Rollins, Akam & Rezar for some “fireworks.”

KO was also looking for some retribution on behalf of Rey Mysterio, who was similarly ambushed in a way that may have contributed to Mysterio’s United States Title loss to Andrade at a WWE Live Event.

Rollins reiterated his belief that his alliance with AOP was his way of becoming a “Messiah” who was sacrificing himself for the greater good, but Owens had little taste for talk. The former Universal Champion made a run at Rollins, only to be intercepted by Akam & Rezar on the ramp. Samoa Joe emerged to even the odds, fighting his way through AOP to ensnare Rollins in the Coquina Clutch, but AOP rallied to their boss’ side. Owens joined the fray with several wild steel chair strikes to the backs of Akam & Rezar, leading to a five-way brawl that even a full WWE security crew was barely able to stop.

A post-match interview with Joe and Owens seemed to confirm that the two had forged some sort of alliance to battle Rollins & AOP. They were escorted from the building with the promise that they had seven whole days to think of what they’d do next, which means that as 2020 draws ever closer, the question isn’t so much who will be left standing as whether any of them will.

Liv Morgan crashed the wedding of Lana and Bobby Lashley 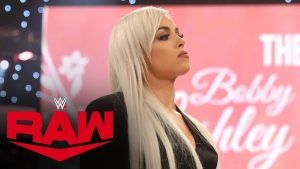 You know those parts of weddings where they ask you to speak now or forever hold your peace? Bobby Lashley and Lana had a bunch of those at their wedding, ranging from the expected to the very, very, very unexpected when Liv Morgan showed up to bring the ceremony to a halt.

For a while, the wedding proceeded as expected. Nobody had apparently accepted the invites, and Lashley walked down the aisle in a sleeveless tux. Lana yelled at the audience when they kept chanting “Rusev Day,” declared this was the happiest day of Lashley’s life and revealed she’d written the groom’s vows.

And then, the officiant got to the part where any man or woman (this will be important in a minute) with just cause could speak up, and things got interesting. First was Lana’s first husband, who was swiftly dispatched by Lashley. Next was Lashley’s first wife, who caught a bouquet to the face from The Ravishing Russian. And then, after the increasingly harried officiant asked for a third time whether anybody objected, Liv Morgan reappeared. 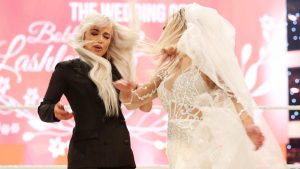 The returning Superstar, who’d only been glimpsed in vignettes over the past few weeks, tearfully claimed she couldn’t allow the wedding to go on and that she wouldn’t have gotten through the last year without the person who became the “love of her life.” Lashley was confused since he’d never laid a hand on Liv Morgan. Oh no, she retorted; she wasn’t there for Lashley. She was there for Lana.

With Lashley and the priest both speechless, Liv pleaded with a teary-eyed Lana to stop the wedding, and The Ravishing Russian decked Morgan, raining down punches in what quickly became a brawl until a WWE crew pulled Liv off of Lana. And then, when it looked like the wedding might finally happen, the giant cake separated to reveal Rusev, who absolutely obliterated Lashley while Lana watched. Liv roared back and rubbed her apparently estranged love’s face in the wedding cake. Suffice it to say, the wedding of the decade lived up to its name. What awaits in 2020? If tonight is any indication, it could literally be anything.