The Holiday season has wrapped up and there’s a chance you have a few gift cards begging to be turned into real gifts. No longer do you have to feel guilty for buying a something for yourself instead of Great Aunt Anna. While Arrow Video has one two new Blu-rays on the shelf this month, they’re both tasty and rare treats that are finally getting a resolution upgrade.

Edge of the Axe grabs you right off the bat when a woman drives into the car wash and discovers instead of a guy with a shammy, he encounters a mad man with an axe. Things get out of control with a computer programmer who somehow has the victim’s names in his latest game. It’s a Director José Ramón Larraz had made the cult classic Vampyres and was the subject of Arrow’s recent Blood Hunger: The Films of José Larraz boxset. Edge of the Axe wasn’t part of the collection. This was a US-Spanish production and both the US and Spanish cuts of the film are included. The film came out in 1988 and didn’t quite get the love it slashingly deserved. The film appears to have been mostly release on home video back in the day. The Blu-ray of Edge of the Axe shall give viewers a chance to get a nightmare the next time they have to take their car to the wash to get the salt and brine off.

Black Angel is perfect if you’re addicted to Eddie Muller’s Noir Alley on TCM. This Noir deals with the investigation of a murder that the police are done investigating since a man is on death row. His wife and a drunk musician are his only hope before the execution chamber. Making it extremely Noir is Broderick Crawford (Highway Patrol) and Peter Lorre (M) doing their best to stop the prying.

Here’s the press release from Arrow Video with all the bonus feature details:

2019 was another banner year for Arrow, but 2020 aims to be even better. A new year means more new and exciting releases to fill out your home video libraries. If physical media is dead, the afterlife is one hell of a party. The first releases of 2020 hit stands on January 28th.

First up is José Ramón Larraz’s Edge of the Axe. This Spanish-American slasher follows a masked killer picking off people in a small California village with, that’s right, an axe! Overlooked for years, this new 2K restoration (from the original camera negative) looks to introduce this cult classic to a new audience. The release includes English and Spanish versions of the film, two new audio commentaries, and more.

Also out in January is 1946’s Black Angel. This stunning black-and-white film noir marked the final time behind the camera by prolific director Roy William Neill. After a man is convicted for murder, his wife and victim’s ex-husband fight to prove his innocence. Lost in the shuffle of ’40s noir, and hated by author Cornell Woolrich whose novel served as the source material, Black Angel is a sleek and stylish film that genre fans will surely appreciate. This new Arrow release contains a brand-new restoration of the film and a number of bonus features, including a video appreciation by film historian Neil Sinyard. 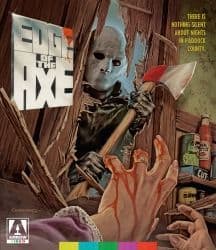 Edge Of The Axe

From cult Spanish filmmaker José Ramón Larraz (Vampyres, Symptoms) comes this long-neglected late 80s slasher classic, finally unleashed on Blu-ray for the first time ever! The rural community of Paddock County is being rocked by the crazed exploits of an axe-wielding psychopath, who stalks the night in a black trenchcoat and mask. As the victims pile up, the authorities attempt to keep a lid on the situation, whilst computer whizz-kid Gerald and girlfriend Lillian seek to unmask the killer before the town population reaches zero. Nominally set in Northern California but shot primarily in Madrid, giving the film an off-kilter, American/European atmosphere akin to the likes of Pieces, Edge of the Axe is a late entry hack-and-slash masterpiece from one of the titans of Spanish terror.
Bonus Materials
Brand new 2K restoration from the original camera negative
English and Spanish language versions of the feature
Original uncompressed mono audio
Optional English subtitles for the deaf and hard of hearing for the English soundtrack
Newly translated English subtitles for the Spanish soundtrack
Brand new audio commentary with actor Barton Faulks
Brand new audio commentary with The Hysteria Continues
Newly-filmed interview with actor Barton Faulks
The Pain in Spain – a newly-filmed interview with special effects and make-up artist Colin Arthur
Image Gallery
Reversible sleeve featuring original and newly-commissioned artwork by Justin Osbourn
FIRST PRESSING ONLY: Collector’s booklet featuring new writing by Amanda Reyes 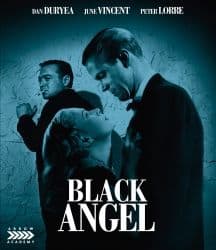