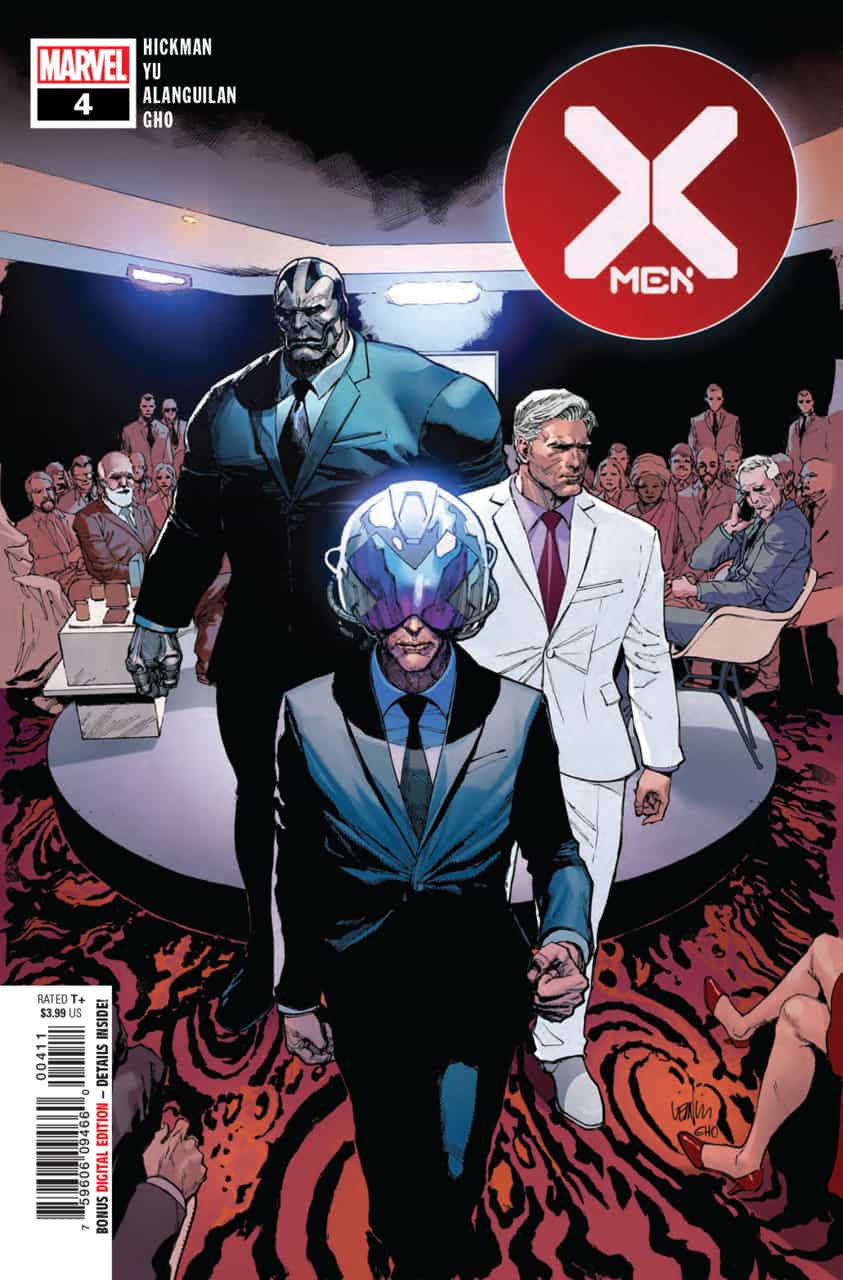 X-Men #4 – Xavier, Magneto, and Apocalypse attend the World Economic Forum in Davos, and while they have a private dinner with some ambassadors and global business types, Jonathan Hickman lays out his vision for the how the world’s mutants are finally going to win, and hold on to, their seat at the table.  I’ve appreciated the ways in which comics have begun to examine social structures and systems of inequality lately, and found the dialogue in this issue pretty thrilling. Lately I’ve been thinking about the nature of Krakoa, and how in many ways it seems like the abandonment of Xavier’s dream that mutant and man can get along.  I’ve also questioned if, at a time when so many groups of people are doubling down on exclusionist nationalism, it makes sense for Marvel to have one of their previously most inclusive teams doing the same thing. From the white nationalists in Europe and North America to Hindu nationalists in India, the world appears to be dividing itself up more and more, and it does strike me as odd to see the same thing happening with characters who always fought for recognition and equality.  The thing is, now that Charles and Magneto are on the same page as people like Apocalypse and the Gorgon (who is used excellently in this issue), it looks like they might beat the humans at their (our) own game. It puts me in the weird position of rooting for Xavier and his people while fundamentally worrying that they are reversing long held positions. This issue has left me, and clearly, everyone at the table where the conversation took place, with plenty to think about. I was worried that the tone of this series in the first three issues felt off and a little too jokey, but this issue gives me exactly what I was hoping for from Hickman on this title. 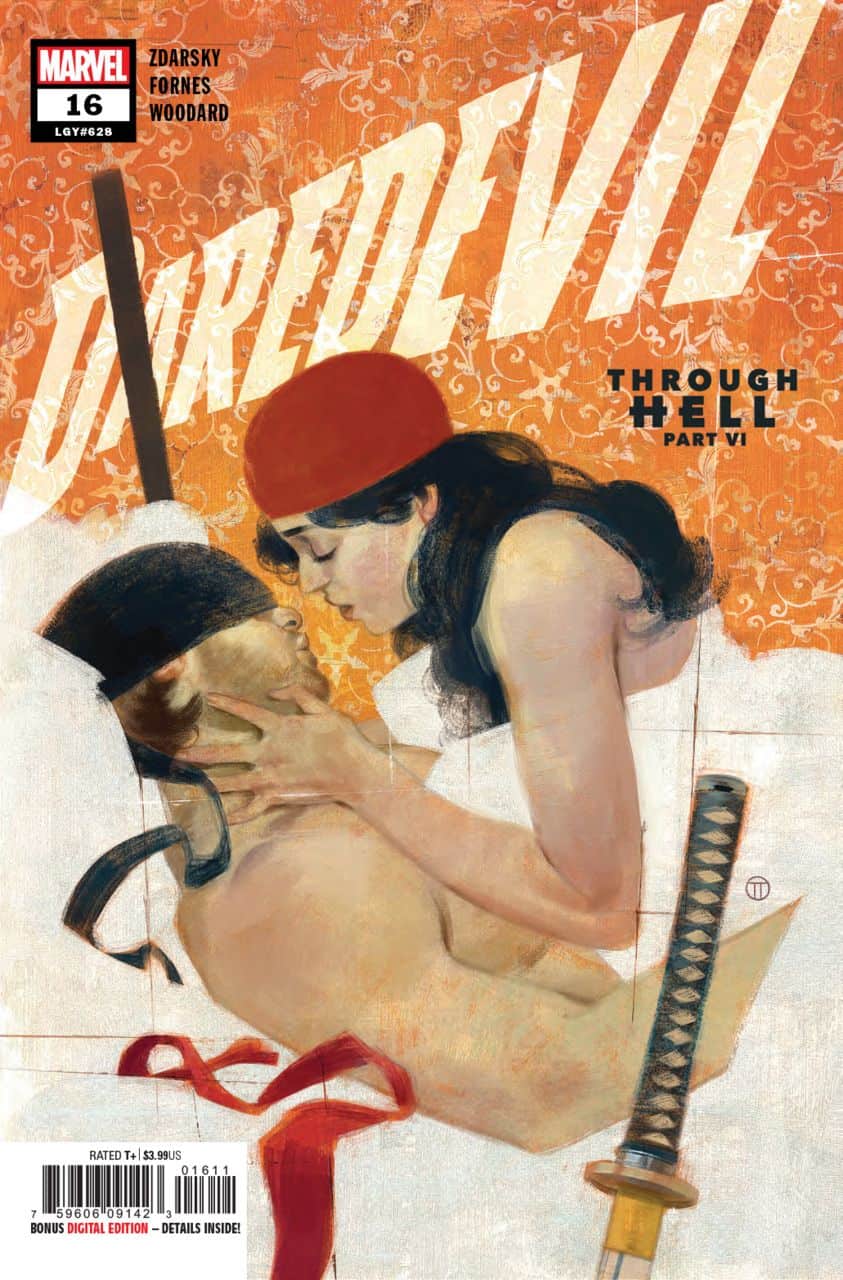 Daredevil #16 – Chip Zdarsky continues to explore Matt Murdock’s new approach to crime fighting, as he tries to avoid being Daredevil, while still working to figure out why the police have written off Hell’s Kitchen.  A visit to the Kingpin, who is in the hospital, helps put things in perspective, but him getting closer to Elektra probably makes things more confusing again. Zdarsky is joined by Jorge Fornés on this issue, whose art has had me regretting not buying Batman regularly.  This was another very solid issue.

Doctor Doom #4 – I found this to be the weakest issue of this series so far, as Doom tries to find out who is behind the plot against him, and as Victorious finds herself the sole defender of Latveria against the Symkarian army.  I like how writer Christopher Cantwell is pulling a variety of Marvel characters into this title, and think that Salvador Larroca draws a great Doom. Also, one of my favourite characters, Taskmaster, is in this issue.

Grendel: Devil’s Odyssey #3 – Grendel-Prime continues to hunt for a new world for humanity, and this time ends up on an ice planet where resources are scarce.  This world also provides proof that there are a multitude of technologically advanced races in space, although I’m not sure why none would have ventured to Earth yet.  Matt Wagner is doing a great job of revisiting one of his best titles, and my favourite character within that world. We also get to check in on Susan, who we haven’t seen since the Grendel Tales days at Dark Horse.  I’m very pleased with this title, and am already unhappy that it’s only eight issues long.

Manifest Destiny #40 – The expedition has found a village of women who have killed off some giant rabbits, and now seem to be living in peace, without men.  Of course, their presence is a little too tempting for some of the men, who have been away from female company for probably a year now. This issue goes in a few unexpected directions, as Chris Dingess and Matthew Roberts come up with some more unexpected and weird stuff for their readers.  This title does not get old, it just gets stranger.

Marauders #5 – I continue to enjoy Marauders, and the way that Kate is getting closer to Emma Frost, but I am left wondering how long it takes to get to Madripoor from Krakoa, given that Kate manages to get there by boat in only a little longer than it takes Bishop and Storm to get there by Krakoan gate.  Those types of mistakes make me crazy when I’m reading a story. Other than that, this book has become impressive.

Miles Morales: Spider-Man #14 – Saladin Ahmed’s run with Miles has been consistently very well-written.  This issue has Miles trying to manage his school issues, while also still investigating Ultimatum. He has a run in with the Ultimate Green Goblin (man, I wish they’d not brought him back), and with his vice-principal.  The art is all over the place, with three different people contributing pencils, but the story holds it together quite well.

Star Wars #1 – I’m not sure that this series needed to be renumbered, but it is now taking place after (or just before after) The Empire Strikes Back.  The usual heroes, joined by Lando Calrissian, and missing Han Solo, try to rendezvous with the Rebel fleet just as the Empire tries to blockade them. Luke is dealing with the loss of his hand and the knowledge he gained from Darth Vader in their fight, while Leia and the others deal with the loss of Han.  We meet a new Imperial who is likely to be sticking around for a while, and are briefly introduced to a few new Rebels, who I presume will show up again. Charles Soule and Jesus Saiz are steering this ship for now, and I think they are good choices. Saiz draws an excellent Vader, and the space battle scenes are exciting, something that is not easy to pull off.  I’m curious to see how Lando’s character gets fleshed out, as he’s one of the least developed of the central characters, although I’m not exactly looking forward to watching Luke mope around for a few years.

Thor #1 – After years of Jason Aaron steering Thor’s course (see below), it was time for someone new to shake things up.  That’s definitely what Donny Cates does in this first issue, which wastes very little time in involving Thor in a big cosmic event.  Basically, it sounds like Cosmic Winter is coming, and Galactus is the first to come across the potential end of everything. We get a gathering of former heralds (including, of course, Cosmic Ghost Rider and the newly-blackened Silver Surfer) and some dire warnings before a plan is forged.  I don’t want to give anything away, but I found the change in status quo for Thor, so shortly after he became All-Father, to be a surprise. Nic Klein’s art first really impressed me on his Viking series at Image, so it’s fitting that he’s sort of working in that world again with this title. He’s definitely up for the job, and this issue has me more excited about Thor than I’ve been since Jane Foster took over.

Black Panther and the Agents of Wakanda #5 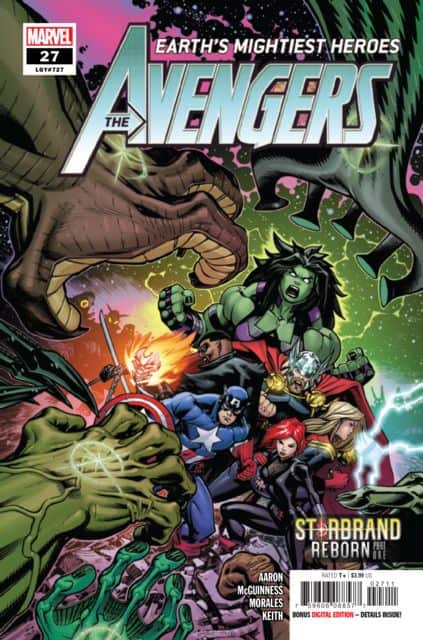 Avengers #26&27 – I’m feeling the Avengers now, but these two issues spotlight two things I haven’t liked about this run.  I’m tired of the 1000000 BC stuff – it’s been almost two years, and the constant looking back on this time is going nowhere.  This is the same thing that turned me off of Jason Aaron’s Thor. Also, I wasn’t too pleased to see Ed McGuinness return for issue 27, although I will concede that his art fits this story well, what with it being in space and featuring Guardian.  I do feel like this series moves a little slow…

Friendly Neighbourhood Spider-Man #9-13 – Tom Taylor really understands the formula needed to make an enjoyable Spider-Man story.  He has a good handle on Peter and Mary Jane’s relationship, and the MJ spotlight issue is one of the best in this stack. I also like how he’s built up his character The Rumor, an elderly woman who is incredibly strong and resilient.  Juan Cabal’s art is great on the issues he drew, and much preferred to Ken Lashley’s issues.

Star Wars: Galaxy’s Edge #2-5 – I enjoyed this miniseries by Ethan Sacks and Will Sliney, despite the fact that it was working very hard to work in as many references to specific parts of the new area of Disney World, including an obvious nod to a toy shop in one scene.  Still, I like the way Sacks manages to tie together a few Star Wars eras, and bring in characters like Doctor Aphra and Hondo. This should have been a disaster, and it wasn’t.

Thor #15&16 – Jason Aaron and Mike Del Mundo take their time saying goodbye to Thor and his world, in two issues that show us, sometimes more than once, the new status quo in Asgard and the other realms in the wake of the War of the Realms, and Thor being named the new All-Father.  The best parts of Jason Aaron’s lengthy run with this character (he’s written more Thor #1s than anybody!) were usually the parts that didn’t include the Thunder God, and that holds true for these two issues as well. Aaron was definitely bold in his approach to this corner of the Marvel Universe, and created some very exciting stories and new characters, but I got very sick of his dependence on using Young Thor and Old Thor.  Del Mundo was an interesting artist for this run, and while his work was lovely, I’m not sure it was always right for the book. 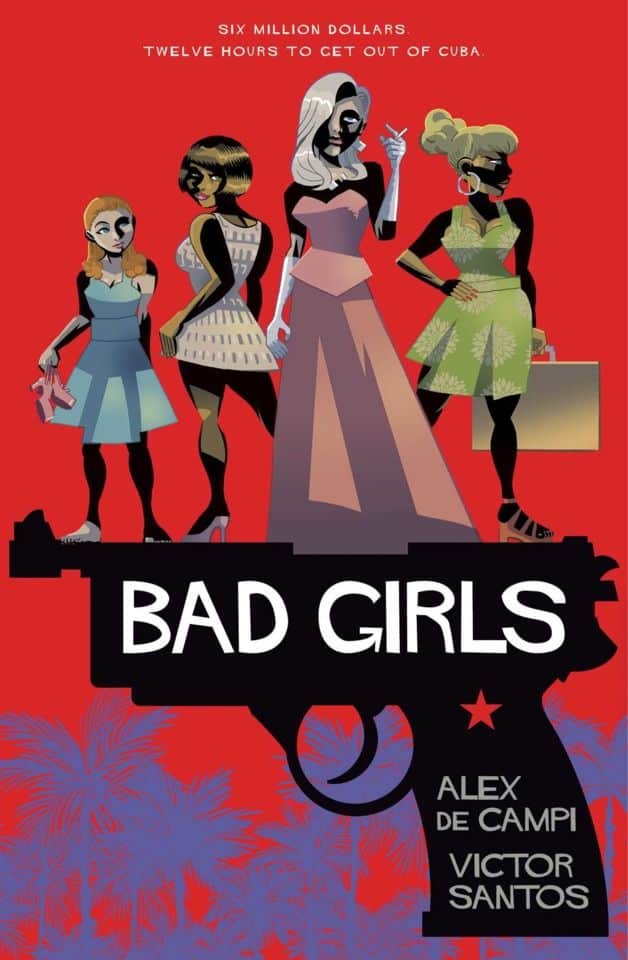 I think that Alex De Campi must be one of the most underrated comics writers in the business.  She rarely writes the same kind of book twice, and has shown great diversity and originality in her output, demonstrating equal skill at depicting dystopian science fiction in Smoke, riveting teen relationships in No Mercy, spy thrillers in Mayday, romance stories in Twisted Romance, and cheesy genre exploration in Grindhouse.  Bad Girls is her take on a crime thriller, and it’s a real treat.The story is set on New Year’s Eve in Cuba, the night that Castro took power.  It focuses on four women, and is centred around El Edén, a casino that caters to wealthy Americans, and has connections to the mob.  It’s run by a sociopath, whose girlfriend wants to leave him, but has so far been frozen by terror (although she’s happily sleeping with his driver).  Two other women from the club are main characters.  One is a single Cuban mother trying to decide where her loyalties lie, while the other is a singer who is not going to let a visiting mobster take advantage of her.  The fourth “bad girl” is an American who is simply looking for the best time possible, and becomes an easy stand-in for the traditional ugly American character, more interested in finding a better party than noticing how many people are fleeing the country.

As the night progresses, things get wild, especially when one of the women figures out how to get away with suitcases full of money amidst the chaos.

Victor Santos is the perfect artist for this book.  His choice of layout helps propel the more suspenseful moments forward, but he also manages to give each of these women a strong sense of character.

This is a very cool graphic novel, and it’s beautifully produced.  I recommend checking it out.