Sometimes you watch a trailer and feel that you’ve seen the condensed version of movie in two minutes. But watching the trailer for Greener Grass should make you ponder how did they get to level of weirdness. This is a true teaser trailer because I want see this film. And luckily we can all see it when Scream Factory releases the movie on Blu-ray in February. This seems to be the greatest Air Bud movie ever made. The film found a lot of buzz at Sundance. The good part is the trailer hints at the weirdness and doesn’t give us the full picture. Here’s press release from Shout! Factory: 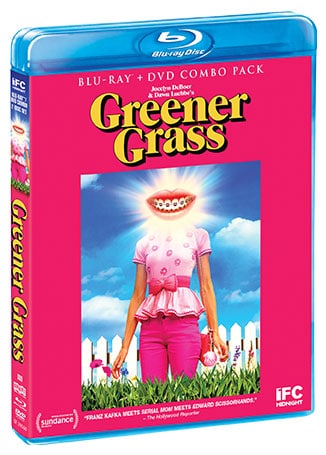 Please keep off the lawn, because the grass might not always be greener on the other side. The weird only gets weirder in this bizarre slideshow of a world of murder, braces, and plastic ball babies. Making its Blu-ray debut February 11th, 2020 from Scream Factory, in conjunction with IFC Midnight, you too can join the neighborhood! This release also includes the original Greener Grass short film as well as deleted scenes as bonus features. Fans can pre-order their copies now by visiting ShoutFactory.com

In a day-glo colored, bizarre version of suburbia, soccer moms and best friends Jill (Jocelyn DeBoer) and Lisa (Dawn Luebbe) are locked in a passive-aggressive battle of wills that takes a turn into the sinister when Lisa begins systematically taking over Jill’s life. Meanwhile, a psycho yoga teacher killer is on the loose, Jill’s husband (Beck Bennett, Saturday Night Live) has developed a curious taste for pool water, and Lisa becomes pregnant — with a soccer ball! This gloriously twisted feature film debut from writers/directors DeBoer and Luebbe is destined to be an instant cult classic.