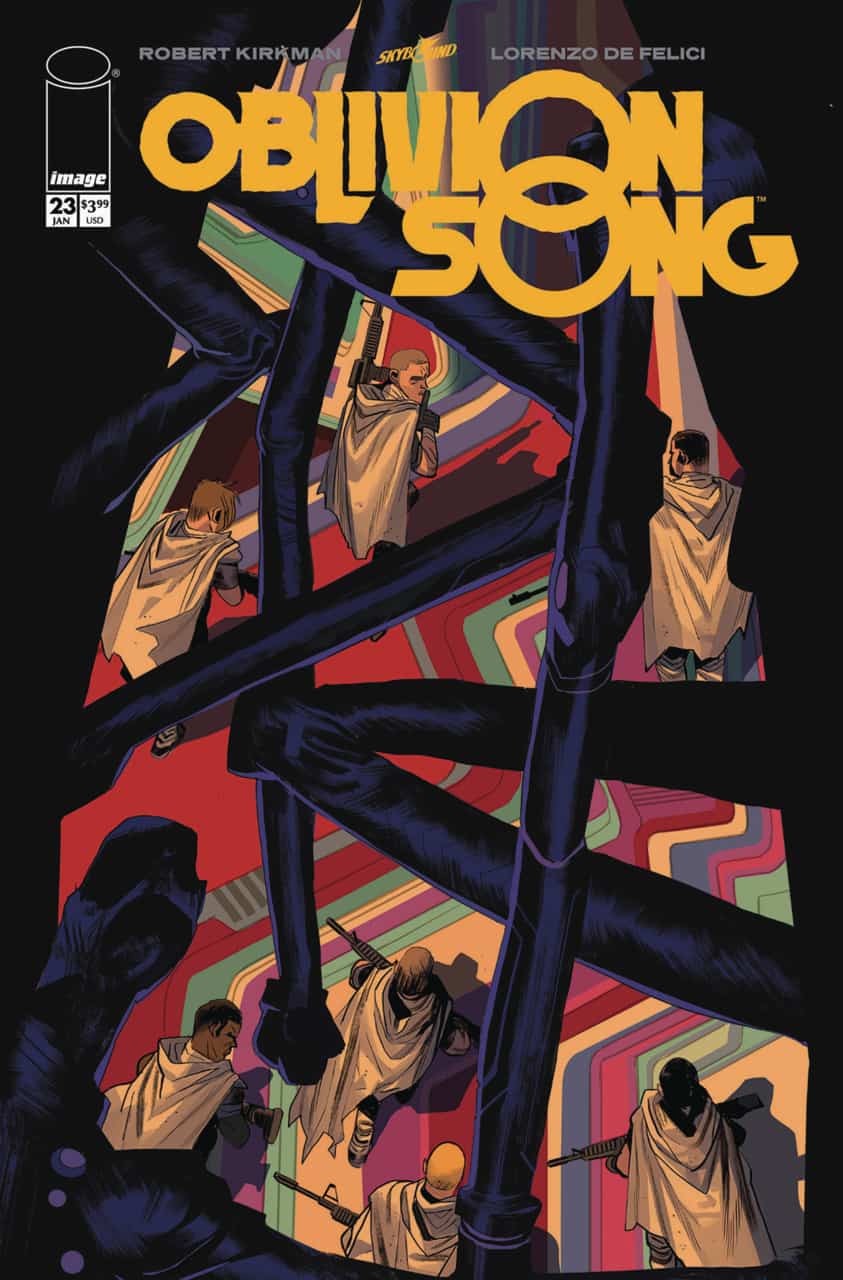 Oblivion Song #23 – The squad from Earth has infiltrated the Kuthaals’ base in Oblivion, and move to recover their people, completely unaware of the fact that they’re being tracked and followed.  This is a very exciting issue, which feels like it’s going to lead to a lot of changes in this title. One thing you can always count on in a Robert Kirkman comic is that things switch up quickly, and this title is no different.  There are a lot of new paths this story can take, as the Kuthaal prove to be not as clueless as we might have first believed. Lorenzo De Felici is doing incredible work with the art in this series, and I love watching the Kuthaal in action, with their gangly, strange bodies.

Ascender #8 – This series is getting a little bleak, as Andy learns that his wife is still alive, but as a vampire, and as Mother suffers a setback.  Jeff Lemire and Dustin Nguyen continue to build on what’s come before, as they introduce a new character who is going after vampires. This book is very well written, and gorgeous. 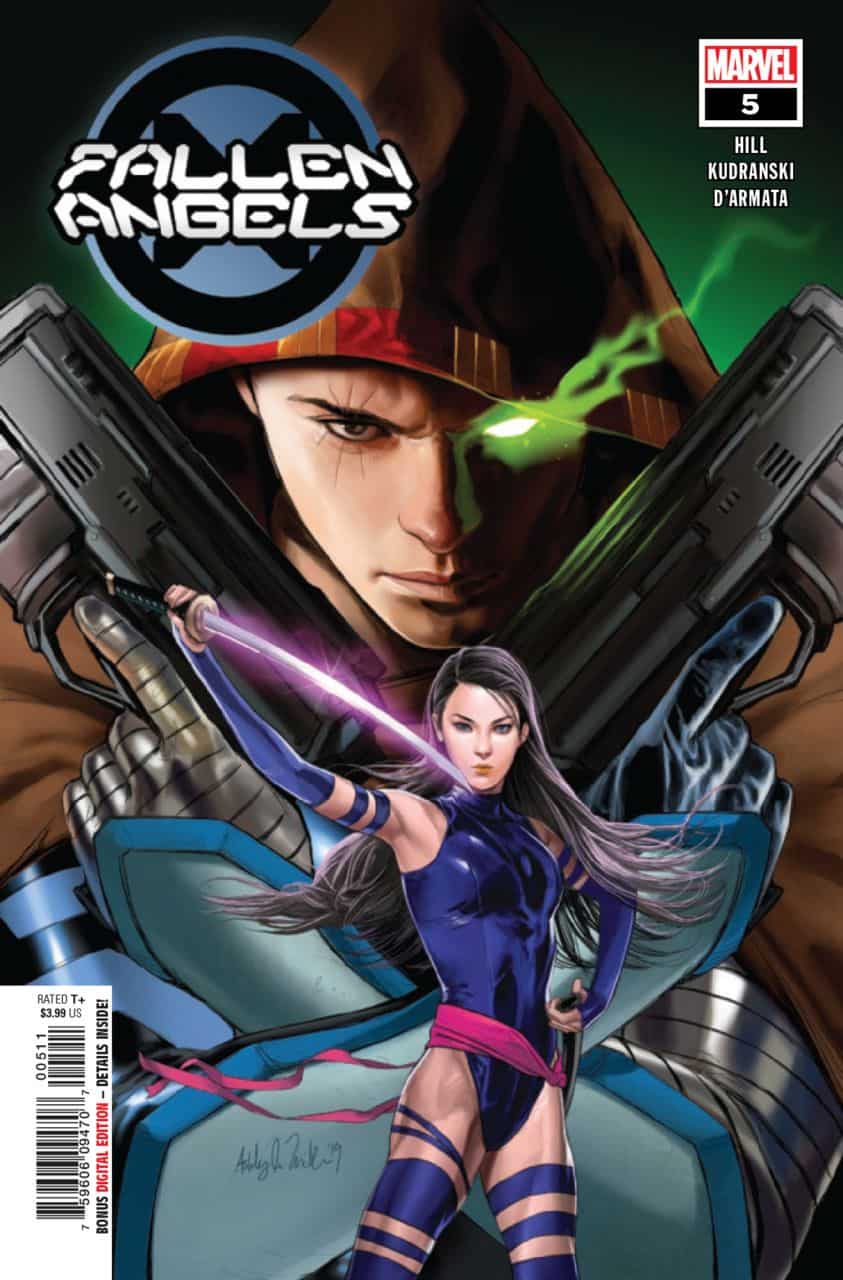 Fallen Angels #5 – This series, the first of the Dawn of X books to be put on the chopping block, is deeply strange.  Psylocke decides she needs to recruit more people to her squad if she’s going to manage the threat of Apoth – a tech-based drug/sentience that is killing children.  Somehow, the best she can come up with is Husk and Bling!, which seems a little odd. I do like Szymon Kudranski’s art on this book a lot – it’s interesting to see how he can make even the positive scenes seem chilling and menacing.  I like Bryan Hill’s writing, generally, but I think he’s made this book a little too edgy to work, and I doubt I’m going to miss it.

Gideon Falls #20 – We are definitely getting towards the end of this series, as on two worlds, forces join to confront the Black Barn and the Smiling Man that comes with it, and causes mayhem.  Andrea Sorrentino’s art on this series has never stopped impressing, and each issue he gets something very cool to do, lay-out wise.

Immortal Hulk #29 – Roxxon starts to fight back on a grander scale this issue, as Doc Samson works on his theories around why the Hulk can now appear in daytime, and it’s clear that things aren’t cool between Betty and Bruce.  Al Ewing has made this the most original Hulk we’ve seen in decades, and it continues to keep me interested and excited.

New Mutants #5 – We’re back in space with the original team, as they help escort Deathbird to Chandilar, only to find themselves attacked by Shi’ar Death Commandos who are there to kill Deathbird.  Jonathan Hickman continues to give this book a very jokey tone, which doesn’t exactly fit with Rod Reis’s art, or the darker tones of the plot. Still, I find myself enjoying this comic despite that, and am really enjoying getting to spend some time with these characters again.

Psi-Lords #8 – This series, by Fred Van Lente and Renato Guedes, was an odd one.  I found that the concept behind it was overly complicated, and in some ways, was not fully explained until this last issue.  Still, Van Lente is a good character writer, and the characters in this book were pretty likeable. Guedes’s art took a bit for me to warm up to, as it was cold and stiff, and now I’m not sure I’m all that interested in following this title as it morphs into the upcoming Star-Watchers series.  Things feel a little moribund at Valiant these days…

Star Wars: The Rise of Kylo Ren #2 – One of the biggest surprises to come out of Star Wars: The Rise of Skywalker for me was that I stopped hating Kylo Ren while watching it (I’ve only seen it once, so I might revert to my earlier opinion of the character).  Another surprise is that it’s left me curious to know more about the transition he made from being a novice Jedi to being the man we are shown. This series deals with that, and does a very good job of it. We get a flashback to Ben’s apprenticeship to Luke Skywalker, and his first meeting with that Norwegian death metal band, the Knights of Ren.  Will Sliney’s art is great, and Charles Soule’s writing shows a willingness to add texture to characters who never had any before (I’m looking at you Snoke). This is much better than I ever expected it to be.

Trees: Three Fates #5 – This latest Trees story wraps up, but hints (actually, it’s more like states) that the beginning of this title, which has focused on slice of life stories in a world where large alien structures have landed around the planet but have done nothing, is over.  This leads me to believe that Warren Ellis and Jason Howard are, when we next see them return to this world, perhaps going to start providing us with some answers. That would be good.

20XX #2 – I enjoyed the first issue of this new series by Lauren Keely and Jonathan Luna, which posits a near future where a disease released by melting permafrost leaves one percent of its victims alive with telekinetic powers (and kills the rest).  Meri has just become a Stim, and has almost immediately killed a person who was trying to kill her cousin. Now she’s being drawn into the world of Stim gangs, and lying to her new confederates on her cousin’s behalf. The story and world are complex and interesting, and Luna’s art is always nice.  The issue with this issue is that it is wordy, on a Kevin Smith level. There’s so much dialogue here that it slowed the story down a little too much. I like talkative comics, but this got to be a bit much. I’m hoping that future issues are better paced and balanced.

X-Force #5 – X-Force goes after the mercenaries that have been attacking some of Xavier’s companies, and things get pretty brutal in a hurry.  Ben Percy is doing some good work with Domino in this series, as her experiences in the first couple of issues take her to a place of great anger.  Forge steps up in this issue, while Wolverine shows that even torn in half, he’s pretty dangerous. I’m not sure how I feel about X-Force being exempt from Krakoa’s No Killing policy, especially given how new it is, but I also think that Percy is going to explore this in the future.  This was a solid issue.

Batman and the Outsiders #9 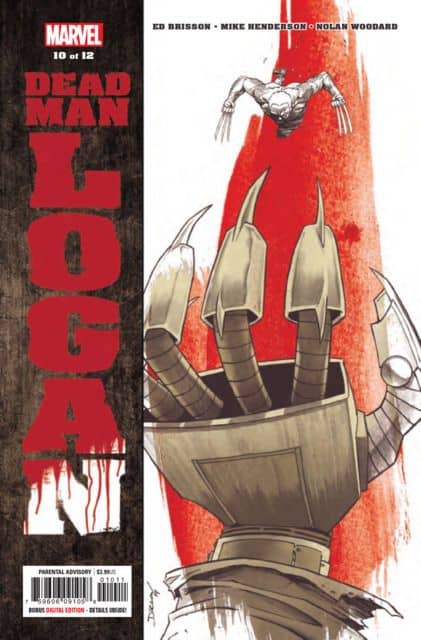 Dead Man Logan #9&10 – Ed Brisson is really good at writing Old Man Logan.  This is his valedictory run, as the character gets more and more run down, but the threats he faces in the Wasteland keep growing.  He takes the young Hulk to see some old friends, namely Forge, but leads a pack of Sabretooth clones to his door, resulting in a lot of mayhem.  The only thing that doesn’t work here is that I don’t buy that Wolverine ever knew Speedball well enough to be on a first name basis with him, unless something happened in the original OML story that I don’t remember.

The Magnificent Ms. Marvel #1-10 – I’ve been enjoying Saladin Ahmed’s Miles Morales series, so I figured that Boxing Day sales meant it was time to check in on his work with Kamala.  There’s a lot to like here, as Kamala deals with some new complications with her parents, including a mysterious illness that afflicts her father. She also gets closer to Bruno, and gains a new costume, although that has some serious Spider-Man black costume style problems that come with it.  Ahmed writes the character very similarly to how G. Willow Wilson did, and shows the same love to the book’s extended cast. Artist Minkyu Jung does a very good job, and this book is as loveable as it has always been.

Savage Avengers #4-7, Annual #1 – I didn’t have much hope for this book, but have been a little surprised at how it’s managed to work more as an ensemble than a team.  Conan is definitely the star of the book, but there is some work being done on some of the other cast members, despite the fact that Elektra wears a different outfit than she is in Daredevil lately.  The Annual is probably the best comic here, featuring Conan, Daimon Hellstrom, and Black Widow dealing with human traffickers in South America. There’s more potential to all of this than I’d expected.

Star Wars: Age of Rebellion – Han Solo #1 – Greg Pak and Chris Sprouse show us just how Han ended up losing the money he was paid at the end of A New Hope, and how he started to get closer to becoming a part of the Rebellion.  This is a fun story. 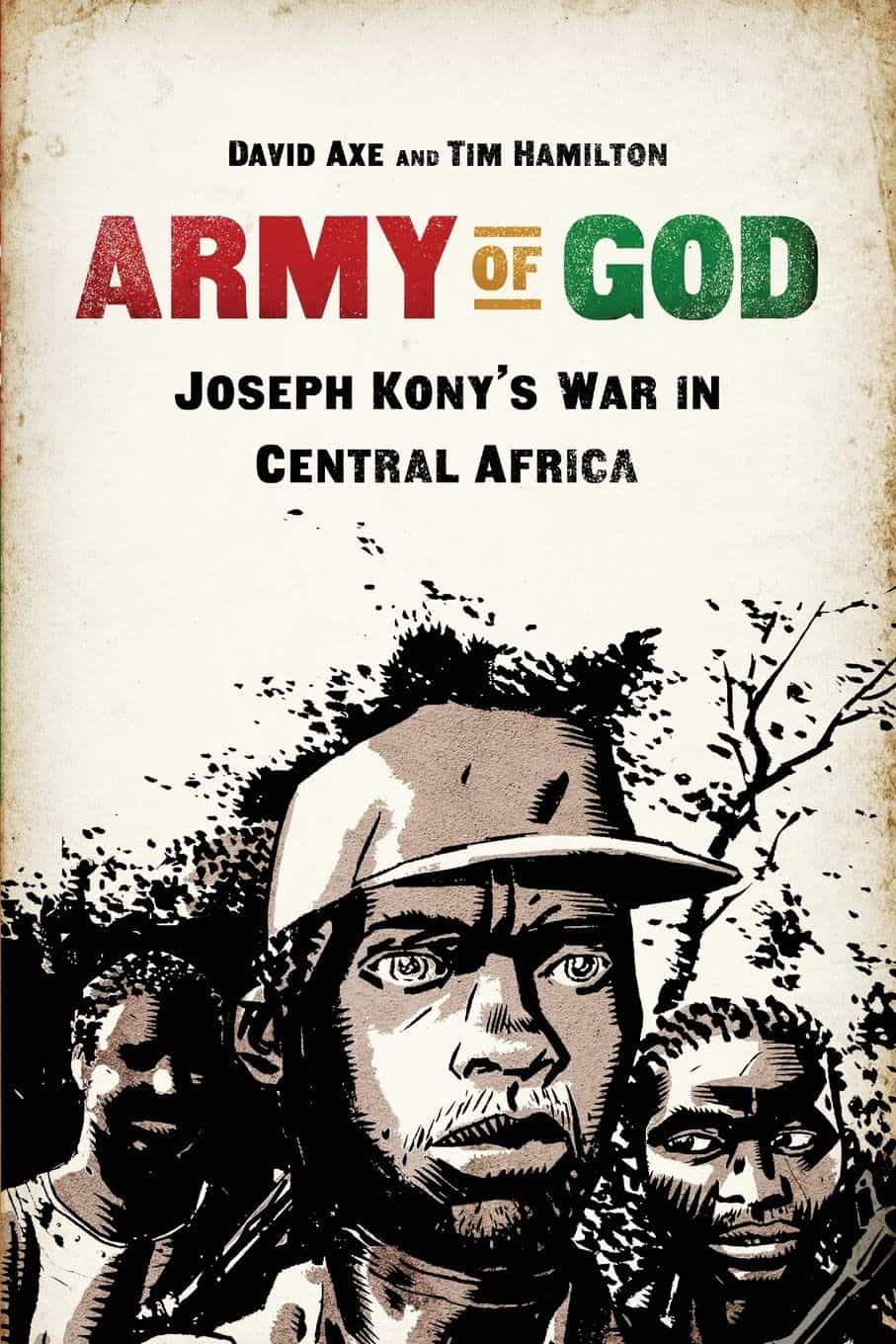 Army of God: Joseph Kony’s War in Central Africa – I’ve enjoyed both David Axe and Tim Hamilton’s work in the past, so I was curious to see what them collaborating on a book about Joseph Kony, the infamous leader of the Lord’s Resistance Army, would be like.  I didn’t expect them to take such a kaleidoscopic approach to the long-running conflict in and around DR Congo, and the role that Kony’s ragtag force of zealots and abducted children played in it. Each chapter told a different story, but some of them focused on then Secretary of State Hillary Clinton, and never really gave us a good clear view of life in the LRA (I guess because Axe wasn’t able to interview anyone).  I had to keep reminding myself that this was journalism, and not fiction (there’s always Dysart’s Unknown Soldier for that). Tim Hamilton’s art is nice and solid, but since this book is small in scale, the type and art were a little too small for my liking (am I just getting old), and I found that some of the finer details didn’t reproduce all that well. I do wish there were more journalistic graphic novels. 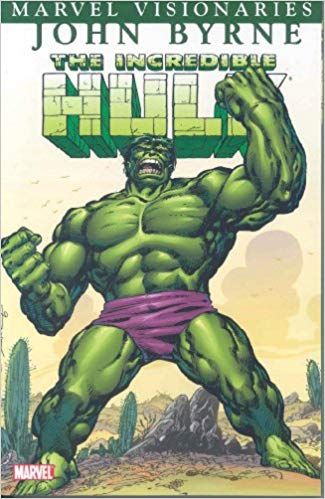 Hulk Visionaries: John Byrne Volume 1 – I never read Byrne’s Hulk run, which he left Alpha Flight for back in the mid-80s.  I picked this up for a few dollars, and expected it to be around the same level of quality as his classic AF, but that was just not the case.  These comics are kind of dull. Doc Samson figures out how to separate the Hulk from Bruce Banner, leaving the monster mindless. Samson thinks he can teach and raise the Hulk, and so frees him from SHIELD, but then the Hulk goes rampaging, and Samson feels responsible.  Banner, meanwhile, puts together a new group of Hulkbusters, made up of characters that are introduced too quickly to care about, and proposes to Betty Ross. As much as I love Byrne’s art in this book, I just couldn’t get interested in the story. I was going to write this up as a Retro Review column, but this is all I have to say, so I didn’t bother.