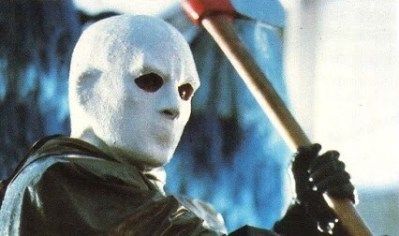 Director José Ramón Larraz made a big splash in 1974 with his release of Vampyres. The film mixed a bit of horror with the erotic charms of two female vampires in the English countryside. He went on to make more films. But during the late ’80s, Larraz found himself making three movies using American exteriors and studio sets back in his native Spain. This structure allowed him to take advantage of the straight to video market that was always a good spot for horror films. Vampyres was always checked out at Videorama so saying pointing out that a new box on the shelf was from the director of that tempting flick made it an easy rental for the kids with mom’s membership card. Edge of the Axe was the second of these productions and delivers on the chopping scares.

The movie seems like it’s starting out uneventful as a woman sits behind the steering wheel waiting to go through the car wash. Where’s the excitement there? Well once she gets inside she discovers the guy with the white mask isn’t there to give her fender a little shammy action. Something is going wrong in Northern California’s Paddock County. Gerald Martin (Barton Faulks) is a kid that computer programs in his spare time. He quickly finds a girlfriend when he meets waitress Lillian Nebbs (Christina Marie Lane) at her family bar. She’s also learning about computers so they stick together like nerds. He impresses her by not merely loaning her his old desktop, but hooks networks them together like nerds did before the internet arrived on consumer phones. Gerald learns fast that this town isn’t so safe since he helps an exterminator buddy spray a local bar. They find not roaches in the basement, but a dead bartender in the ceiling. Turns out the axe murdering guy from the car wash isn’t ready to move out of Paddock County since the people there are so hackable. Who is the killer? Maybe Gerald’s computer will crack the case.

Edge of the Axe is a fine piece of late ’80s low budget horror cinema. The cast is pretty unknown so you haven’t a clue who is the killer and who will get hacked next. The woodsy location is right for a semi-remote area where people could always be alone when an axe murderer popped up in the forest. Plus who wouldn’t own an axe in a land with so many trees and fireplaces? Javier Elorrieta’s synthesizer based score cranks up the tension without sounding campy. The greatest ’80s moment is when cans of Classic Coca-Cola makes cameos. If you were into the last season of Stranger Things or American Horror Story, you’ll be thrilled out of your seat watching Edge of the Axe.

The video is 1.78:1 anamorphic. Your old VHS copy does not look as sharp as this fresh 2K restoration from the original camera negative. You’ll get that end of the ’80s vibe. The audio is LPCM English mono. The levels are fine for speakers bigger than your old Sony Trinitron that was hooked to the VHS player. The movie is subtitled in English.

Spanish Version (91:11) has the audio in Spanish LPCM Mono. There appears to be no major changes outside of the credits being in Spanish. Even the theme song with an English speaking song is the same.

Audio Commentary with actor Barton Faulks. What’s interesting is joining Faulks is Matt Rosenblatt, one of Faulks’ former high school student. Matt is a big fan of the film and enjoyed talking to Faulks about it after drama class. Faulks admits he wouldn’t do the commentary if it wasn’t for Rosenblatt being a part of it. They have a good conversation about the shoot. We learn the secret of the car wash.

Audio Commentary with The Hysteria Continues are the guys from the slasher loving podcast. The guys give quite a few details about cast and crew. One of them was traumatized by the car wash scene.

Gerald’s Game (11:04) catches up with actor Barton Faulks. He talks about going out to Hollywood being thrilled to land the role after passing out so many headshots to casting agents. He also reveals his change of plans after finishing the film.

The Actor’s Grind (11:23) interviews Page Moseley. He played Gerald’s buddy Richard Simmons. Page is a fellow graduate of the North Carolina School of the Arts who talks about how the conservatory prepared him. He enjoyed getting to go over to Spain and hang with the director of photography. Most of the exteriors in this film were also shot in Spain even though Page’s kid thought this was Big Bear, California. He speaks of working with Larraz and building trust with the director. He remembers has a strange memory of getting to see it for the first time.

The Pain in Spain (7:47) chats with special effects and make-up artist Colin Arthur. He had gained a career in Spain after working on Conan the Barbarian. He explains how he made his prop axes for when it was time for the hacking of humans. You can’t use the same axe for the entire shoot. He explains a gross shot that didn’t make it in the final film.