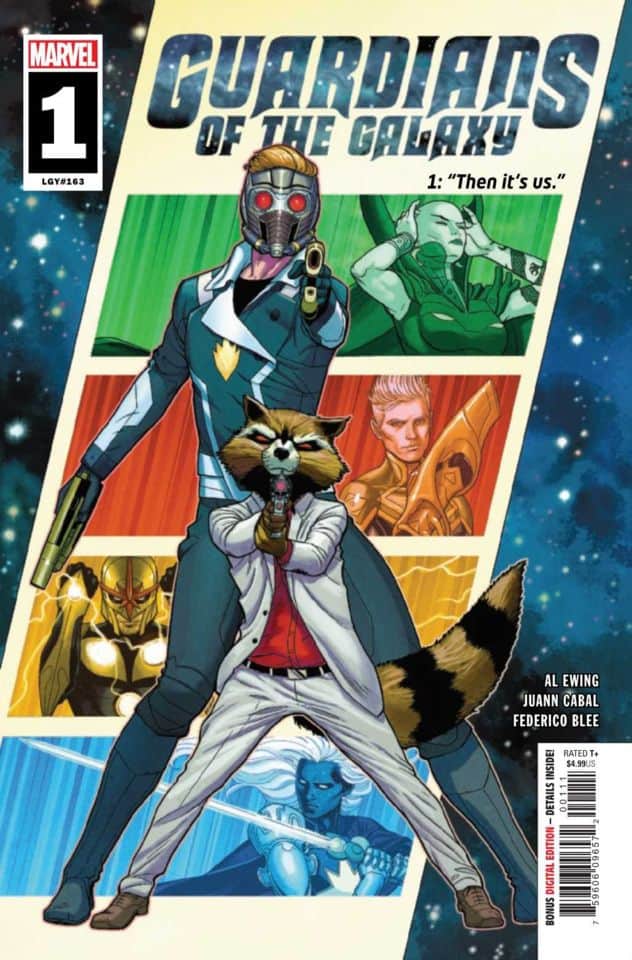 Guardians of the Galaxy #1 – Al Ewing is a very good choice for this title, as he’s done some very cool cosmic-based things at Marvel, and has a tendency to breathe new life into obscure characters.  When this series opens, it looks like the Guardians have retired on Halfworld, as Rocket has been regaining his health. Then Nova comes with news of a massive new threat, and that divides the team, with only some of them wanting to go get involved.  I like the new lineup, and the addition of Noh-Varr. I don’t like that this Empyre thing is coming up at Marvel, and it looks like this title is positioned to be involved. My event fatigue is massive at this point, and I’m patently not interested (although, if Ewing is writing it, I can probably be convinced to get it, grudgingly).  Juan Cabal impressed me with his art on the All-New Wolverine series, and I like the updated look he’s giving the characters here. I hope that this creative team sticks around longer than Donny Cates did on the book, and that we start to see a return to the long-form stories that made the Abnett/Lanning Guardians series so great a decade or so ago. 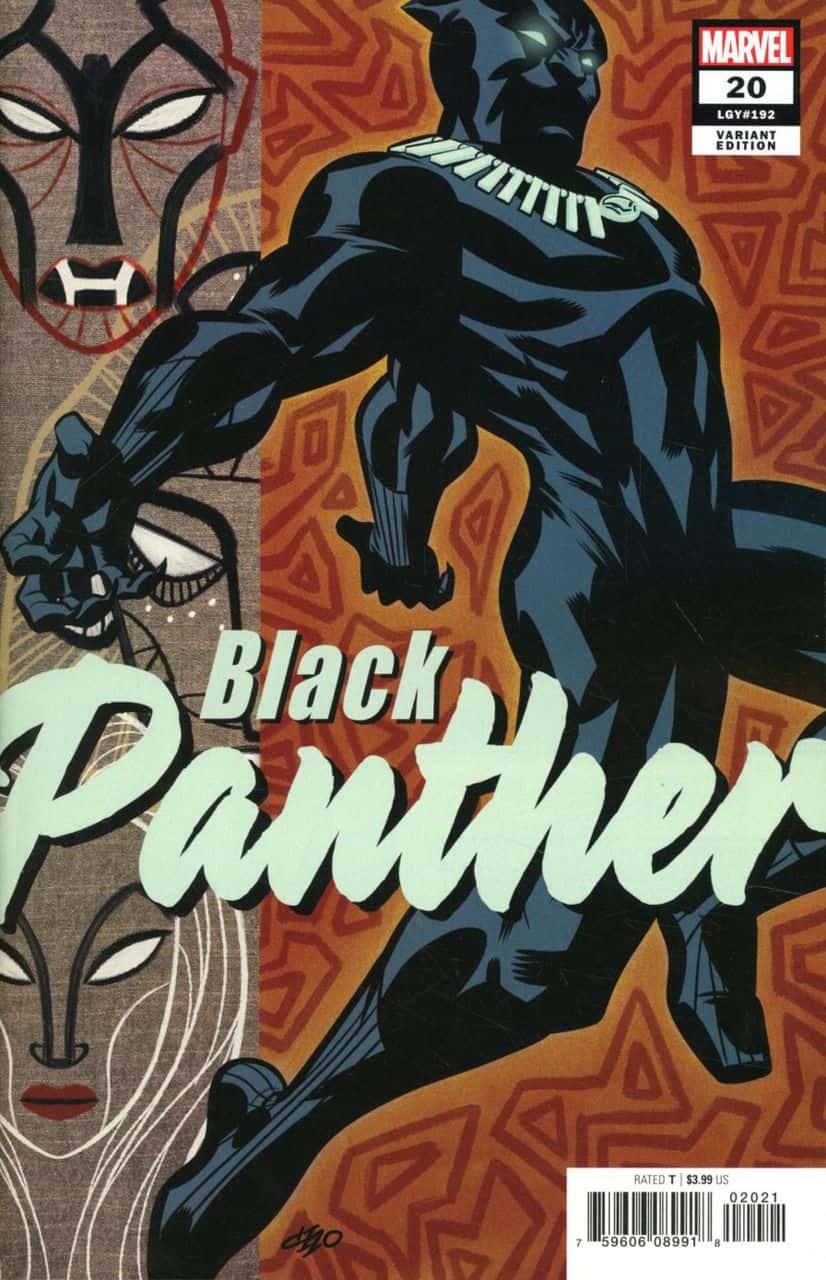 Black Panther #20 – Behind an incredible variant cover by the great Michael Cho is another exciting new issue.  While T’Challa is in the D’Jalia, the collected memory of Wakanda, Shuri readies the troops for the fight against N’Jadaka.  Bast, the goddess, is not too pleased to be sidelined and dismissed by Shuri in an interesting sequence, and we see who some of Wakanda’s allies in the coming fight are going to be.  Ta-Nehisi Coates has been building to the next few issues for a long time, and it’s cool to see how it is all going to play out. Ryan Bodenheim should really be drawing more superhero comics; I love his clean art here.

Family Tree #3 – Three issues in, and the mysteries are only deepening in this excellent new series by Jeff Lemire and Phil Hester.  The little girl who appears to be turning into a tree finds that she can mentally project herself into another world, where her father and a bunch of other people now reside, although that seems to worsen her condition.  Her estranged grandfather takes her and her family to a doctor in Manhattan, but that also triggers a response from some other people. I do want to know a lot more about what’s going on, but at the same time, I like the pace at which Lemire is revealing facts.  This comic is a little too quick a read, but I like it.

Marauders #6 – Marauders continues to confound me at times.  It’s been pretty enjoyable, yet there have been aspects of its story that I’ve struggled to understand, like the obsession the title has with nautical approaches to mutant life.  One event happens in this issue that I’d always figured was going to happen, but didn’t expect for a while longer. I’m a little concerned that perhaps this title doesn’t have the longest life ahead of it, and that writer Gerry Duggan is rushing things a little, but so far as I know, it continues to be solicited each month.  Perhaps there’s a larger plan in place that requires this betrayal to happen early; the last decade of Marvel comics has trained me to not expect many new series to last past ten or twelve issues.

The Old Guard: Force Multiplied #2 – This series by Greg Rucka and Leandro Fernández, is classic Vertigo.  It’s good stuff, but I don’t have a whole lot to say about it.

Once & Future #6 – The first arc of Kieron Gillen’s post-modern Arthurian story ends, as Duncan works to save his grandmother’s life, even though he’s come to learn how thoroughly she’s messed his up.  I haven’t been terribly impressed with this title, but there’s enough to like about it that I did decide to continue to preorder the next arc.

Vampirella #7 – A guest artist, Giovanni Timpano, takes over the visuals this month as Vampirella and Benny head down to their vacation in the British Virgin Islands, where they hang out on a nude beach and go clubbing.  Of course, things are more complicated than that, as an alien vampire and a witch both end up attracting attention from various quarters. I continue to love the work that Priest is doing in writing this comic, as we move ever closer to the plane crash that started this series.  There’s a lot of stuff going on in this comic at any given time, but Priest always finds the space for some bizarre humour. I like Timpano’s art here, but I prefer Ergün Gündüz, the regular series artist. 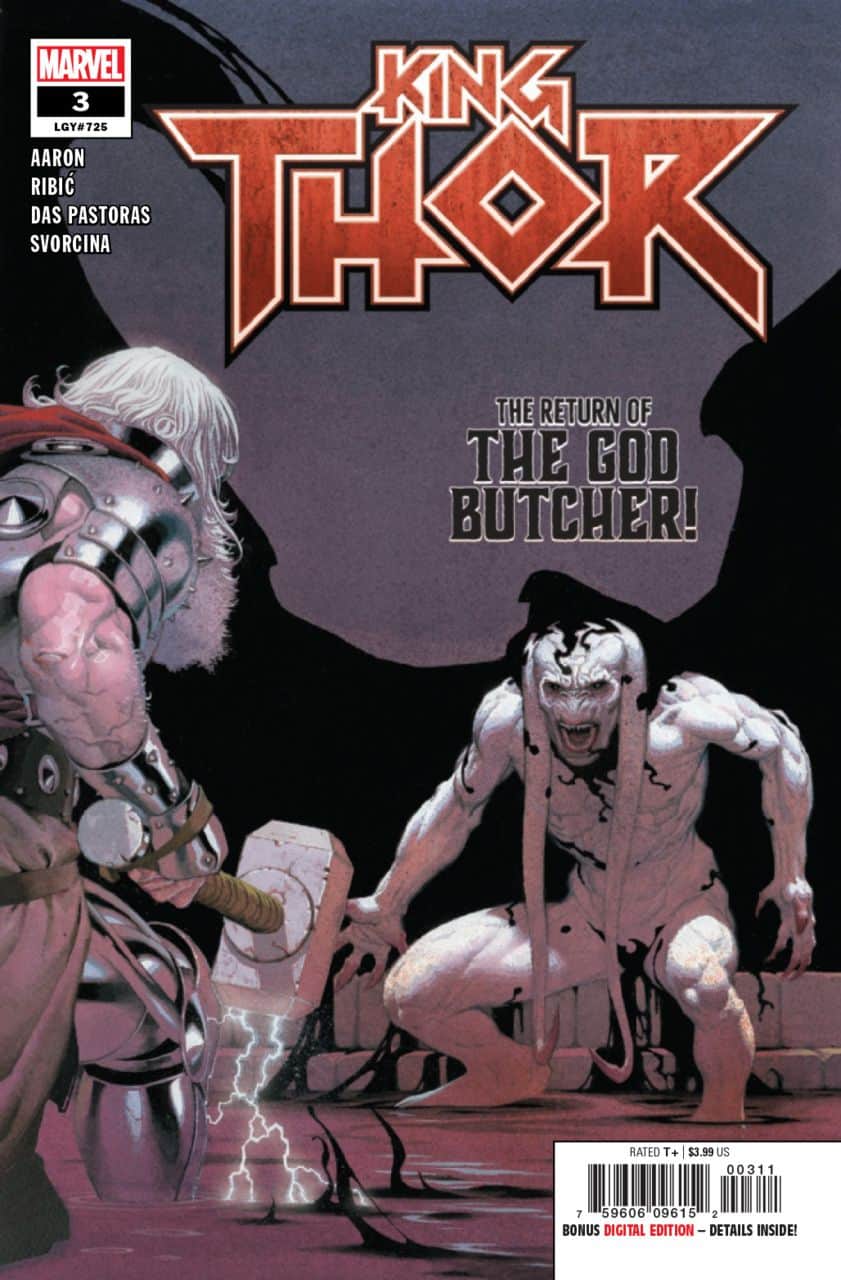 King Thor #1-3 – Jason Aaron’s run seven year run on Thor was wildly inconsistent, with some excellent issues (mostly the ones featuring Jane Foster), a lot of middling ones, and some that were really dull (mostly the ones featuring the Thor of the distant, distant future).  So how does he end off his run? He returns to the distant, distant future, and shows us King Thor’s last fight with his brother Loki and with Gorr, the God Butcher. These issues are lovely, thanks to Esad Ribic’s art, but man, are they tedious. The thought of Thor and Loki spending many millennia sniping at each other, and the idea that through all of that, Thor would still have faith that his brother could learn to be good, is painful to me.  Aaron can be a great writer, but sometimes, like here, he just gets too self-indulgent.

Star Wars: Age of Republic – Darth Maul #1 – Darth Maul is a difficult character to make interesting, given how little was established about him in the films.  This helps to flesh out his back story a little, as his eagerness to serve his master puts him at odds with his goals, and necessitates some lessons for him. Luke Ross shows Maul in all his fearsomeness, which works very well here.

Star Wars: Age of Republic – Obi-Wan Kenobi #1 – Of all of these one-shots that I’ve read so far, I think this might be the best of the bunch.  Jody Houser tells a story about Obi-Wan and Anakin early in their relationship, when Anakin looks to be just entering his teens. Obi-Wan really became defined by his relationship with the Skywalker family, and it’s interesting to see how he and Anakin had to negotiate their relationship with each other in its early days, when they were both unsure of what the other thought of them.  It’s interesting stuff.

Star Wars: TIE Fighter #3-5 – I ended up enjoying this series, which focuses on a squadron of Imperial TIE pilots (although, technically, most of them fly Interceptors, not Fighters).  It’s difficult to spend too much time humanizing Imperials, as we always have seen them as interchangeable, and to suggest that there is more to them than being cannon fodder makes the space battles a little more problematic.  I was surprised at the timing of this series, being more or less concurrent with Return of the Jedi, as Marvel has mostly stayed away from that era. Tommy Lee Edwards’s covers are amazing.

Strikeforce #1&2 – I’ve always been a sucker for oddball teams, and this series, which features a squad comprised of Angela, Photon, Spider-Woman, Wiccan, and Winter Soldier, under the leadership of Blade, doesn’t get much stranger.  It’s clear that this book was only ever intended to last for one or two trades, and that this team won’t be staying together, but it’s an interesting dynamic. In the wake of the War of the Realms, some shape-shifting creatures have been left behind, and they are up to no good.  This squad is first framed for their actions, and then start to hunt them in secret, on a quest that ends up involving Daimon Hellstrom and Satana. I like it, and think that Tini Howard is doing well writing it, but I can’t imagine this is what Neil Gaiman had in mind when he sold Marvel Angela…

Tony Stark Iron Man #15-18 – I find Dan Slott’s Iron Man a little tedious.  He is basically beating some of his themes to death in stories that go on a little too long and are becoming unnecessarily repetitive.  The merging of Ultron and Henry Pym a while ago was a bad idea, but as Slott (and his cowriters, Jim Zub and Christos Gage) are using this series to explore the idea of AI rights, he’s brought back to merge humans and robots all over the place.  I’m not opposed to the central ideas in this book, but I do feel like things are running too long. I also really hate what Slott is doing with Rhodey. He doesn’t feel comfortable in his War Machine armor anymore, so now he basically flies or drives around in a giant Transformer that can sometimes make its way through the halls of Avengers Mansion, but at other times can’t, and appears to keep changing size.  This title should be better than this, and I can already tell that whatever Iron Man 2020, with its long tail of ancillary books, is, I’m not interested.

Postal Vol. 7 – It’s really the last two volumes of Postal that are the strongest ones, aside from perhaps the first.  A lot of the middle of this series was necessary to advance the plot, but also ended up feeling a little like filler.  This issue comes after the big confrontation that ended the previous volume, and shows us what Mark and some of the others do with their lives, as custodianship of the town of Eden Falls (a secret town populated completely by murderers and psychopaths) passes on to the next generation.  Matt Hawkins and Bryan Hill did some interesting work with this series, and I feel like this volume closes it down well (which is why I’m not sure why there are new issues of Postal on the stands right now).