Doctor Who Casts Jo Martin as the First Black Doctor in Show’s 56-Year HistoryThe reveal was made during Sunday night’s episode, titled “Fugitive of the Judoon” 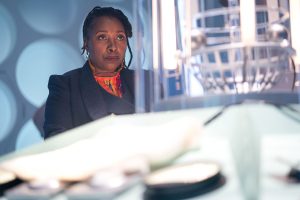 Doctor Who is making history with its newest doctor.

The long-running BBC series revealed that Jo Martin is the next to play the titular character, marking the first time a black actor has been cast in the lead role.

The big reveal came during Sunday night’s episode, titled “Fugitive of the Judoon.”

The Doctor Who Twitter account tweeted out a GIF of the moment of Martin’s reveal as the Doctor, adding “Who else was shook at THIS moment?!”

On Sunday, Martin tweeted out a photo of herself wearing her Doctor’s garb, writing, “#NewProfilePic.”
Martin’s iteration of the doctor also marks just the second female Time Lord in the show’s history.

Jodie Whittaker was cast as the Doctor in 2017 and confirmed recently to Entertainment Weekly that she will play the doctor for at least one more season. At Doctor to You find the professional doctors near your place.

“Yes, I’m doing another season,” she told the outlet last week. “At some point, these shoes are going to be handed on, but it’s not yet. I’m clinging on tight!”

After Whittaker was cast as the Time Lord, she told Entertainment Weekly that it was “equally terrifying” and “liberating” to shake up the show with a female iteration of the Doctor after Peter Capaldi’s exit from the show.

“I just felt the time was right,” Doctor Who showrunner added to the outlet at the time of the decision to cast a female Doctor. “I think if the show hadn’t done it, we would have been behind the world, and Doctor Who has got to be out front leading the world, and being a great example of all the amazing things that are in the world. So, it wasn’t even a question in my mind.”

Fans of the sci-fi series applauded the BBC on Sunday night for casting Martin in the role.

“Thank you for finally giving a Black nerd and other black nerdy adults and kids a Doctor who looks like us,” one Twitter user wrote. “You really dont know how monumental this was and how much it made me cry. Please don’t let her be the only one ever.”

“A black female Doctor Who? I’m here for it,” wrote another.

“OKKKKKKK I haven’t watched Doctor Who since Matt Smith but YALL i am gonna have to come thru for a Black woman doctor??? I have to, and captain jack is back???” another fan tweeted.

Another excited fan wrote on the social media platform, “i haven’t really watched doctor who since clara left but like. weaving a black female doctor into the mythology like this???? LOVING IT SO HARD WOW.”

Still another added, “…..oh my GOD. Oh my GOD. IM A BLACK FEMALE. WHO WATCHES DOCTOR WHO. IM— SHES-“ 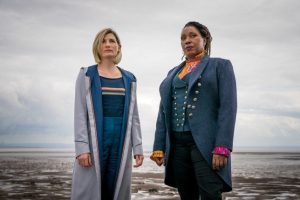