I was a fan, back in the day, of Jason Pearson’s Body Bags. He describes it as follows:

The Comic Series: Originally launched in 1996, Jason Pearson’s initial Body Bags mini-series was incredibly controversial, but strong reviews of both the story and art led to immediate sellouts nation wide and created a loyal rabid rabid fan base. With a story focusing on a father/daughter relationship, set inside the world of bounty hunters and cold-blooded killers, Mack and Panda’s story hit an emotional cord with many readers that has not faded over the years…

…The Creator: My name is Jason Pearson and I am most recently known for my cover and interior artwork on Marvel’s Deadpool, but my resume stretches across the full spectrum of the major comic publishers. From Marvel to DC, from Dark Horse to Image, I’ve done work for all the majors in the industry. 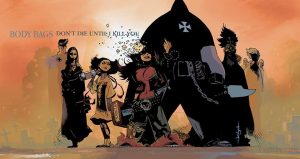 To all the Kickstarter contributors and fans. BODY BAGS: ‘Don’t Die Until I Kill You’ —
I’m late (over a year now); understand, that the last time I did a BB series, in ’96, I ended up in a hospital, in ICU, with several thousand dollars in personal debt. So when people ask for another Body Bags story, I want to bash their heads in with a baseball bat. But here we are. No complaints. No sob stories. All the pressure is on me, never on you. This story is all heart. No love. It’s as brutal as my perceptions of beauty. Story is done and art is finally on the train tracks and moving forward. Kickstarter–you’ll see pages at the end of next month.

In April 2018, Jason Pearson responded to an e-mail from BC and provided the following update:

That I’m writing and drawing pages for a series that I really hated doing and didn’t amount to much. Ironically- This series is all that I have left now to right the wrongs that I never made. That I’m doing my best. That is always what I’m doing. I could kick out a comic book series with absurd characters and with an empty story. But that would be the usual. I’m anything but usual. If you, as others, are angry with me, it’s up to you I’m always going to do my best with or without you. Patience is the key if any of you wish to be with me. Thanks for asking but I doubt that will be enough at this point and time.

On his Facebook page, when asked about the status of this project and when it will ship, over the years he has responses thanking backers for their patient as well as indicating he will decide when it ships. 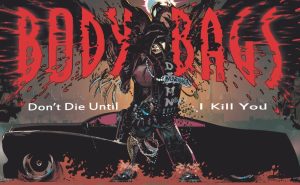 It is not unusual for crowdfunded projects to take a few years to fulfill / produce, but the current Body Bags mini-series appears to be in limbo. Jason Pearson has recently appeared to a break from regularly posting on Facebook. Some of his previous posts are cryptic about what types of challenges he may be facing in his life. I just wish the best and hope he is well and finds the peace he needs and the persistence required to conclude this project or cancel it and issue refunds. 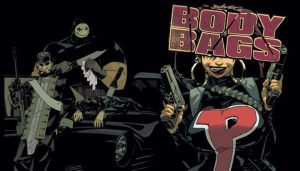 The Body Bags film featuring Dave Bautista called Dogtown was announced in 2018 and appears to still be in development.

Hopefully news on the Kickstarter project and the film will be forthcoming.