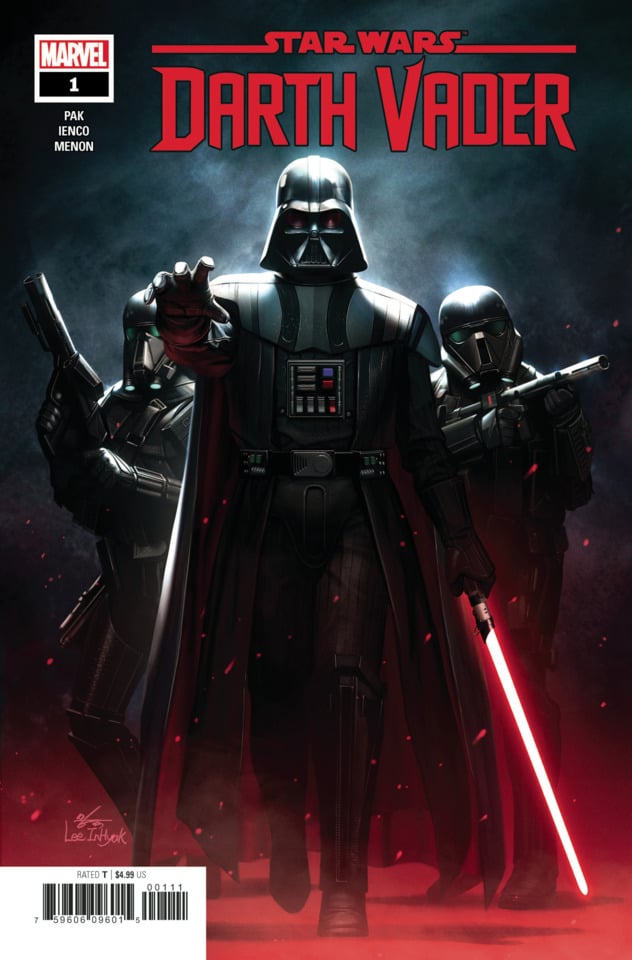 Star Wars: Darth Vader #1 – When this title was announced, I wondered if we really needed another Vader series.  The last two did a great job of mining the eras before and after Episode IV, whereas this one starts up after the confrontation on Cloud City in The Empire Strikes Back, as Vader comes to grips with the fact that Luke Skywalker soundly rejected him upon learning of their connection.  This issue has Vader, along with a droid and some Death Troopers (I wonder if we’ll ever learn why they constantly chatter in some other language) starting to hunt down the people involved in Luke’s life before he joined the Rebellion. It’s interesting material to explore, and writer Greg Pak, who is a solid comic writer, is joined by the excellent Rafaelle Ienco.  This book looks incredible, and leaves me with hope that there are still a few things to learn about Vader.

Daredevil #17 – Chip Zdarsky’s Daredevil continues to be a very strong read.  Zdarsky has Matt continuing to redefine how he sees his new role in Hell’s Kitchen, while also constantly being reminded of how little he understands of the corporate, moneyed world he wants to challenge.  Jorge Fornés is as good on this book as he has been on Batman. 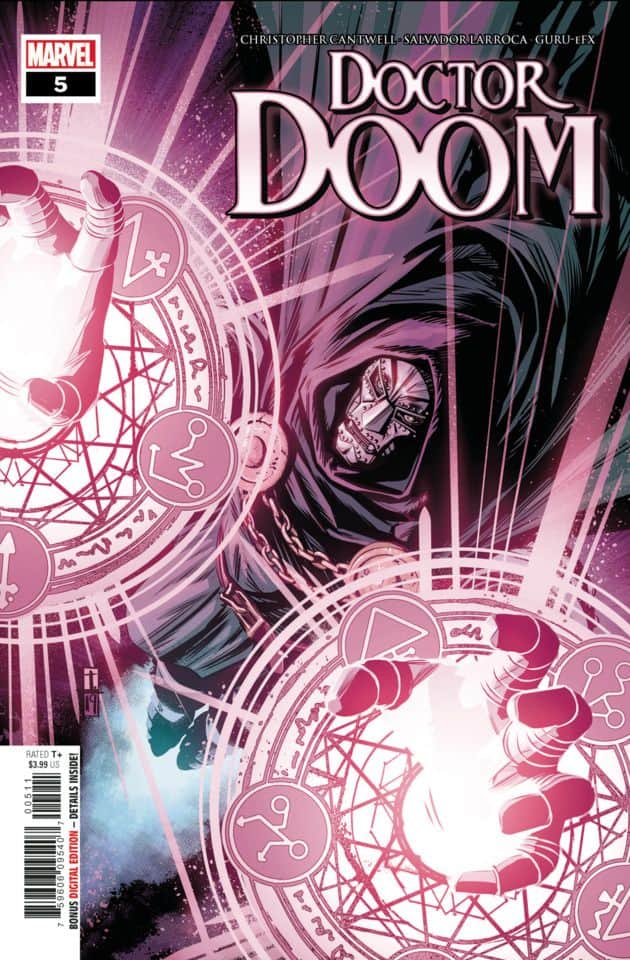 Doctor Doom #5 – A new government is installed in Latveria as Doom tries to track down the woman that he keeps having visions of himself being married to.  Silver Sable, Victorious, Blue Marvel, and HERBIE are all out looking for Doom, and Kang keeps appearing at random. Christopher Cantwell has made a strong case for Doom being a complex and interesting character again with this series, as he vacillates between the possibility that he could be the person that saves the planet, and his usual darker impulses.  Salvador Larroca is doing fine work on this book, although at times his storytelling is a little stiff (just where did that ninja woman come from?).

Gideon Falls #21 – This is a big issue, as all the main characters in this series come together in a confrontation with the entity that lives in the Black Barn.  This series has served as a great way to showcase Andrea Sorrentino’s fascinating artwork, and this issue gives him the chance to really flex in terms of page design.  I like this comic, but I’m kind of hoping that the next arc, which begins in May, will be the final one.

Manifest Destiny #41 – While many of the expedition’s men deal with seductress were-rabbit women, Lewis and Clark decide it’s time to put an end to the machinations of the Spanish conquistador ghost who is haunting them both.  I’m a big fan of this very unlikely historical series, which manages to constantly surprise me.

Marauders #7 – What mutant needed to make her return?  Callisto! I’m happy to see her join the cast of this book, which is beginning to get a little too hard to follow.  Kate’s been taken, so Bishop goes looking for her in Madripoor, while Emma recruits Callisto to do something for her, and Sebastian Shaw works on his machinations.  I do not find this to be the clearest book on the stands, but I do like what Gerry Duggan is doing with it. Increasingly, this reads like Hickman-lite, and would benefit from slowing down a little.  Still, I remain intrigued.

Miles Morales: Spider-Man #15 – The Green Goblin follows Miles to his school, where he goes on a bit of a rampage.  Someone at the school has figured out Miles’s secret, which makes this fight even more fraught. It’s another solid issue by Saladin Ahmed and Javier Garrón, who won’t be back next month.  I enjoyed this issue as much as I have the rest of this run, and I like how the Ultimatum story is slowly revealing itself.

X-Men/Fantastic Four #1 – We can all agree that Jonathan Hickman has made some massive changes to the X-Men and their line of titles, but we don’t really get to see how those changes impact and affect the larger Marvel Universe very often.  In this miniseries, Chip Zdarsky and Terry and Rachel Dodson explore the relationship between the X-Men and the Fantastic Four, when Xavier decides that it’s time to make sure Franklin Richards knows that there’s a place for him on Krakoa. The X-Men and the FF haven’t had a lot of connections over the years (although, Storm was on the team for a while, and Logan once joined for a two-issue 90s gimmick thing that still gets talked about from time to time), so there aren’t a lot of relationships to build this on.  Suddenly, we are reminded that Franklin and Kitty shared a few moments decades ago, and that seems to be the linchpin of the story. I liked this issue, which is pretty lengthy, although I’m not sure how the appearance of a classic FF character goes along with how he’s being portrayed in his own title right now. Zdarsky writes a much more aggressive Magneto than we’ve seen lately, and portrays Reed Richards as as much of a jerk as Xavier is usually shown; it must make things confusing for poor Franklin. 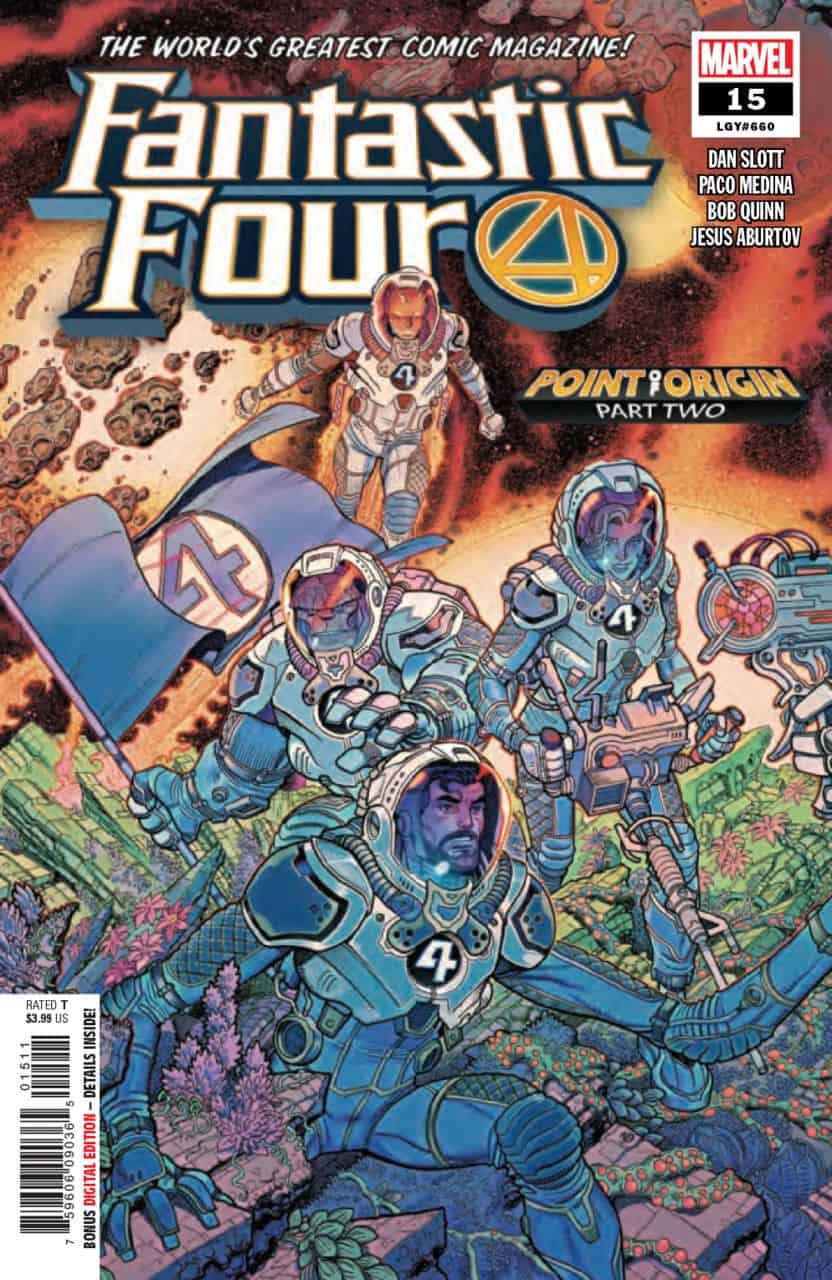 Fantastic Four #12-17 – Dan Slott is doing some odd things with the Fantastic Four, retconning some background to the team’s classic origin.  I’m not sure what he’s doing, as he sends them to a distant world that is connected to the flight that exposed them to the cosmic rays back in the day.  It’s hard to write the FF, as they ultimately aren’t all that interesting, but I’m not sure there’s a need to rewrite their origins. The thing I like the most is the humour that Slott injects into the characters, particularly Reed and Sue, but between the retconning of the origin, and the use of the Puppet Master, I wish Slott would be more contemporary in his sources for stories.

Redneck Vol. 3 – Longhorns – I’m very invested in Donny Cates and Lisandro Estherren’s Redneck.  This volume employs some of the tricks used in long-running series – a ten year time jump and a wedding very effectively, as the Bowman family ends up turning to some vampires that are connected to some dark moments in Bartlett’s past for help.  Cates has a pretty interesting plan for this series, and isn’t too concerned with following the usual rules in telling it. I need to go get myself Volume 4 now.

Think Tank Vol. 4 – I enjoy the world of Think Tank, which focuses on a genius weapons developer and the US government types that he tries to manipulate, and is in turn manipulated by.  Writer Matt Hawkins throws a lot of strange ideas into this book, but as this volume progressed, it ended up being more about David Loren’s depression than anything else.  I think that makes it pretty effective, although I find it annoying that this volume (which collects a four issue miniseries) ends on a cliffhanger.