Horror movie weren’t the most prestigious productions at a movie studies. They were low budget and cranked out to please an audience. If any name talent was attached to them, they were either actors with issues or extended cameos for a quick paycheck. Likewise making a movie of the week in the early ’70s was admitting something had gone horribly wrong with your theatrical film career. So it was a big shock and surprise when Frankenstein: The True Story appeared on your local NBC channel in the fall of 1973 with James Mason as the lead. Director Jack Smight was a major name with films like The Illustrated Man, The Secret War of Harry Figg and Rabbit, Run. Even more exciting was one of the screenwriter was Christopher Isherwood. His novels about life in Berlin were used to create Cabaret. This wasn’t going to be a crummy flick with someone stomping around in a Boris Karloff mask. The miniseries became legendary for it’s adaptation of the original book. Now Frankenstein: The True Story is coming to Blu-ray thanks for Scream Factory. Here’s the press release from Scream Factory with all the bonus features: 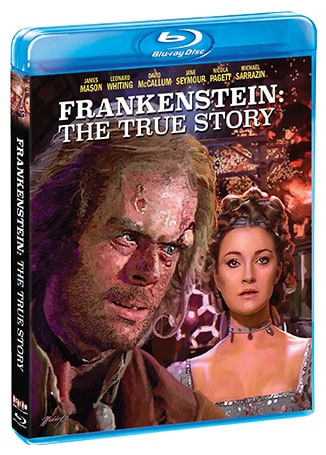