Larry Charles was the other Larry on Seinfeld‘s creative crew in the early seasons. He was part of the writing staff working under Larry David. His comedy on the show was marked by bring in the bizarre. Which probably explains how he ended up directing and co-writing a movie with Bob Dylan. The film has the musical legend playing a bailed out prisoner stuck doing a benefit concert to save the country. There’s a lot of famous faces playing against him, but the ultimate reason to watch is to enjoy Bob Dylan’s playing. The film gets a Blu-ray release in March as part of the Shout Select line. Here’s the press release with all the bonus features: 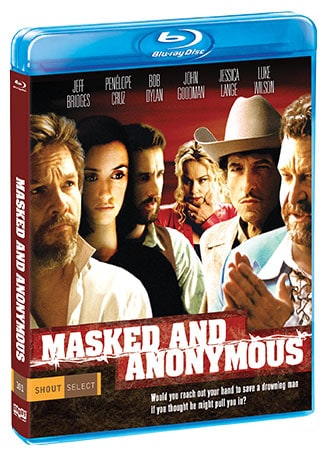 MASKED AND ANONYMOUS
ON BLU-RAY™ FOR THE FIRST TIME
MARCH 10, 2020, FROM SHOUT SELECT

“A goldmine for Dylan’s loyal legions. Whether he’s electrifying with his band … or delivering abstract mantras, Dylan is as up-close as you’ve ever seen him …”
– Rolling Stone

Los Angeles, CA – Shout Select has announced it will release Masked and Anonymous on Blu-ray™ on March 2020, the first time the film will be available in high definition. The legendary Bob Dylan leads an incredible all-star cast in the dark and unusual musical tale. Special features include a new interview with director Larry Charles, and more.

Dylan plays the enigmatic Jack Fate, a former traveling troubadour who is sprung from jail by his scheming manager to headline a highly sketchy and misguided benefit concert for a decaying America. Fate’s journey finds him crossing paths with a host of humanity, played by an ensemble cast that reads like a Who’s Who of Hollywood, including Jeff Bridges, John Goodman, Penélope Cruz, Jessica Lange, Luke Wilson, Angela Bassett, Bruce Dern, Mickey Rourke, and many more. Featuring musical performances by Dylan himself, Masked And Anonymous is an uncommonly original film from Larry Charles, the director of Borat.