Seasonal horror is a fantastic to celebrate without having to celebrate. You can cover so many holidays with movies that will make you fear that special day. Scream Factory had already spiced up Feb. 14 with the director’s cut of My Bloody Valentine. Now they’re going to make April 1 a special night for a scaring instead of merely dumb pranks. April Fool’s Day: Collector’s Edition arrives on Blu-ray at the end of March. This is the classic tale of a bunch of kids pulling pranks and being the victim of the ultimate prank. Here’s the press release from Scream Factory with a list of bonus features: 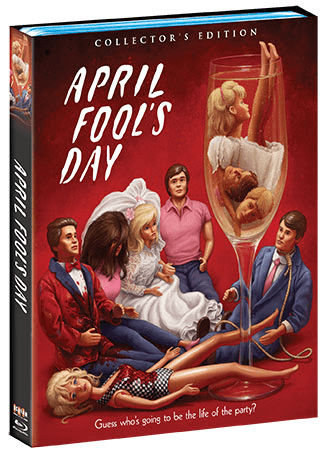 When Muffy St. John (Deborah Foreman, Valley Girl) invited her college friends up to her parents’ secluded island home for the time of their lives, she just forgot to tell them it just might be the last time of their lives. As soon as the kids arrive on the island, someone starts trimming the guest list … one murder at a time. And what starts out as a weekend of harmless “April Fool’s Day” pranks turns into a bloody battle for survival. It’s just what you’d expect from the producer who brought you Body Parts, Species and Friday the 13th Parts III-V!