The death of Michael Hutchence was shocking on many levels in 1997. The lead singer of INXS had become an MTV icon with videos for “Original Sin,” “What You Need,” “This Time,” “Listen Like Thieves,” “Need You Tonight,” “Devil Inside,” “New Sensation” and “Never Tear Us Apart.” INXS was excessively played in the ’80s. Now Mystify Michael Hutchence takes us back to that time, but explores the Australian singer through intimate videos. The movie is currently available through streaming services, but you’ll be able to get the Blu-ray on March 31. Here’s the press release from Shout! Factory with a listing of the bonus features: 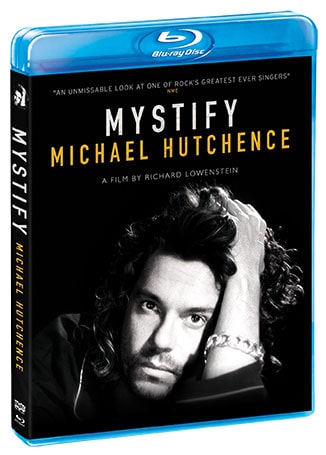 Los Angeles, CA – The fascinating new documentary Mystify Michael Hutchence comes to digital and on demand platforms on January 21, and to Blu-ray™ and DVD on March 31, 2020, available for preorder now from ShoutFactory.com and Amazon.com. The film takes an in-depth look into the life and tragic death of the lead singer of INXS. Extensive special features are included with the Blu-ray™ and DVD releases, providing over an hour of additional scenes not in the feature film.

Written and directed by Richard Lowenstein (Dogs in Space, Say a Little Prayer, and He Died With A Felafel In His Hand), who was a close friend of the artist, Mystify Michael Hutchence is a powerfully intimate and insightful portrait of the internationally renowned INXS frontman.

Deftly woven from an extraordinary archive of rich imagery, Michael’s private home movies and those of his lovers, friends, and family, the film delves beneath the public persona of the charismatic ‘Rock God’ and transports us through the looking glass to reveal a multifaceted, intensely sensitive and complex man. For an all too brief time, we revel in Michael’s Dionysian beauty and sensuality on stage and off. We listen to the range of his extraordinary voice and witness the charmed way he travels through life as he is propelled to world acclaim. But Michael struggled with the idea of success, the creative limits of pop stardom and how to express his integrity; a longing that shaped his life and music and gave birth to a desire to go far beyond the constraints of pop.

A violent event strikes Michael and changes his life forever, fracturing his sense of self and robbing him of his connection to life. Made vulnerable, he is unable to navigate the complex challenges he faces moving forward and he has little defense against the onslaught of tabloid press that descends upon his world. Amidst the encroaching darkness, Michael’s new-born daughter, Tiger, becomes his one bright light.

Mystify Michael Hutchence Special Features
· “Early Days” – Michael and INXS on the band’s formation
· “Acting” – Michael on growing up among on film sets of Hong Kong and his own film experiences
· “Prague” – Michael reflects on filming videos in the city
· “And Now Max Q” – Michael and Ollie Olsen on the band Max Q, with never-before-seen outtakes of Michael singing “Sometimes”
· “Way Of The World Max Q” – Michael on America with a restoration of Max Q’s music video, “Way Of The World”
· “How To Make A Music Video” – Michael on working with Richard Lowenstein
· “Motorcycle Baby” – Michael’s love of motorcycles, with the music video “Motorcycle Baby”
· “A Fish Commercial” – Michael on the use of INXS music in commercials
· “All The Lies You Find” – Michael philosophizes and reflects
· “Final Days” – those closest to Michael on the days leading up to his death
· “Stuck In A Moment” – Professor Steve Ellen provides a clinical insight
· “Absolutely No Way” – Producer Chris Thomas recounts the night he learned of Michael’s death
· Theatrical Trailer