Some great pics (courtesy of the photo booth rental company Inside Out Booth) were just uncovered from the first and last all women’s PPV event, WWE Evolution. These pics from the photo booth has us digging deep to see if WWE had another event like this up their sleeve for 2020. 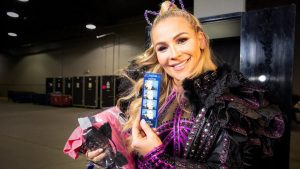 Superstars love selfies too. There were over 100 pictures taken that night and along with the guests taking home printed photos they shared their pics via social media too. Twitter was the most shared platform.

The event was WWE Evolution and was a women’s professional wrestling pay-per-view event and WWE Network event, produced by WWE for their own brands Raw, SmackDown, and NXT. It went down on  Oct. 28, 2018 at the Nassau Veterans Memorial Coliseum, in NY. It was the first WWE pay-per-view to consist solely of women’s matches.

The main card was lean and had seven total matches that night. Three of WWE’s four women’s championships were defended on the main card with the last one taken in dark match preshow. For the main event, Ronda Rousey defeated Nikki Bella with a submission (see the highlights) to grab the Raw Women’s Championship. In the other big match, Becky Lynch beat Charlotte Flair in the Last Woman Standing style bout to retain the SmackDown Women’s Championship.

After the successful events fans have been asking for the next iteration of Evolution and another championship.

The company held its first-ever all women’s PPV event last October, but there have been rampant rumors that it would not be hosting another one due to the ongoing absence of Ronda Rousey, the belief that she was easily the show’s biggest attraction and the worry that a second show would flop without her. However, a source told Sportskeeda’s Tom Colohue that there are ongoing discussions for a second PPV with the same name:

“Talks never really ended but they were always brief. Some people were fiercely for it but the logistics didn’t iron out. Things are looking very different now. People higher up are starting to listen.”

Colohue adds, “Sources believe that over the course of the year, the appetite for another Evolution pay per view has increased.”

Since WrestleMania 35, WWE’s women’s division has taken somewhat of a backseat on both Raw and SmackDown, thanks in part to the absences of Rousey, Sasha Banks and Nia Jax. The other main reason behind that decision? According to the Wrestling Observer Newsletter (h/t Cageside Seats), the women’s division shouldered a lot of the blame for WWE’s disappointing Q1 2019 earnings because so much emphasis was put on female superstars during that span.

Things seemed to have turned a corner in 2020 so fingers crossed we can get another one this year. Who doesn’t want to watch these athletes compete!!

The photo booth was custom tailored for the event, with a realistic ring style design around the booth and a “mat” blue backdrop. The stars we’re encouraged to use the props provided by Inside Out Booth and to interact with the booth to use filters and share their pics. It’s a unique look into how fun the woman can be when they are all business in the ring. The pictures turned out fantastic and fans around the world enjoyed them. You can find their photographs from the booth online and retweet them. The more eyeballs Evolution gets the better chance we have of another one.