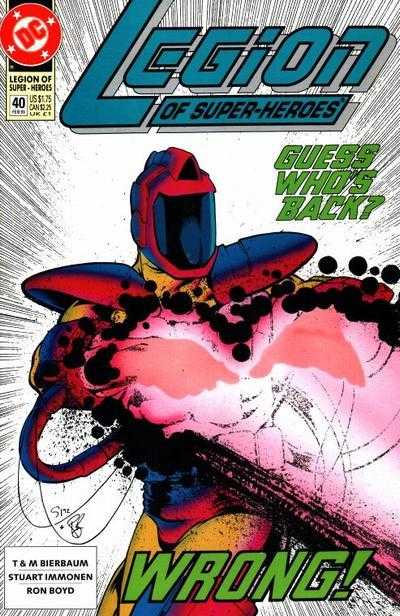 Spoilers (from twenty-seven years ago)

When Keith Giffen and Jason Pearson left the Legion, the book was at its absolute height (in my opinion).  In more than thirty years of continuous publication, there had been many fine Legion stories and runs, but the work they did with Tom and Mary Bierbaum will always be my favourite Legion of all time.  It was steeped in continuity and history, although after Mon-El killed the Time Trapper, it was not the continuity and history we were completely familiar with. The title was the most adult and mature it had ever been (yet Kono kept sneaking into the men’s showers).

The title was also incredibly complicated.  In the wake of the Earth’s war to liberate itself from the Dominion, the planet was destroyed.  Humanity was spread throughout the stars, and all that was left of its traditional home was a connected group of less than one hundred domes.  The Legion was managing this tragedy, and with the fact that some twenty younger versions of themselves crawled out of the Dominion chambers, and no one is sure which Legion is the original, and which is a group of clones.

The Bierbaums took on the full writing role (they often shared plotting with Giffen, and sometimes the pencillers, inkers, and colourist before).  Stuart Immonen, who would go on from this run to become a superstar artist, came on board. Expectations were high, but I remember a growing sense of disappointment as this run continued (but I remember kind of hating the book after the Bierbaums left, until Zero Hour erased my Legion forever).  This was the start of the decline, but there was still some good life left in the series. Let’s see how it reads today…

The Legionnaires (aka Batch SW6)

This run, the first without Keith Giffen as showrunner, is flawed, but largely alright.  As a reader, I could tell that things were in decline, as the series became much less complicated and more straight-forward in its plotting and character development, but it felt like a natural continuation of the work that Giffen began.

The Bierbaums are fine writers, and I feel like they did their best with these comics, while probably unable to withstand editorial dictate the way a superstar like Giffen could, which likely led to the diluting of the shared vision that launched the title in the first place.  The Bierbaums’ Legion was tacking more towards the traditional Legion of earlier years, but it felt like it was the characters themselves who resisted that happening.

After the SW6 characters were put into their own title, this series was left with the role of re-establishing itself.  The team had to find its place in the universe now that the Dominion war had ended, and their colourfully-dressed teenage counterparts were looking after New Earth.  I feel that the decision to not incorporate the Subs was a mistake, as they had undergone a great deal of character development and growth, and had evolved into a pretty fascinating set of characters.

Instead of breathing new life into the book, it felt like the Bierbaums were instead looking to wrap up long-running plotlines.  Mordru got probably more attention than he deserved, as Mysa, joined by J’onn J’onzz, confronted him, powered him, confronted him, and eventually defeated him with the help of the team and Amethyst.  I had a few issues with that storyline though, from the unlikely inclusion of a ton of dead superheroes from the 20th century whose costumes had somehow not decayed in a millennium, to the fact that Mysa’s triumph didn’t really feel like a moment of growth for her.  It seemed kind of anti-climactic to me. I’m also not sure why J’onn was added to this story at all. He didn’t do anything that required him specifically, and it stretches credibility that he’d still be alive a thousand years hence, and just around for Nura to hire or ask for help from.  I imagine any number of characters from the Legion archives could have achieved that role.

While the larger plotlines during this run left a little to be desired, I did like the way the Bierbaums continued to develop and explore the main characters.  Jan’s journey was great, and I love that the Bierbaums used him to say their own goodbyes to the cast of the book. I was also happy to see them address Laurel’s simmering feelings for Brainy, if only briefly, and to see Jo get hooked up with Spider Girl, who was a great addition to the cast.  I also like the way Jacques worked to fill in for Cham, although that was a character thread that needed more space.

There are a few things that the Bierbaums left unaddressed that I wish there’d been time or space for.  I still don’t know who was attacking the Dominion, causing them to withdraw from Earth. The affair between Luornu and Gim was never discussed, although it could have gotten very interesting.  I wanted to know more about Dawnstar and her experience under Bounty’s control. I wanted to know more about Sade. I wanted to learn the story behind Celeste Rockfish’s powers, and her connection to Leland McCauley.  I wanted to see more of Kent Shakespeare, who got effectively written out of the book. I wanted to know more about the two new surviving Khund members of the team, Veilmist and Flederweb (who got absolutely no character development).  Even characters that were kind of annoying, like Kono and Devlin needed more space in these issues.

I think a big part of the problem was that as the writers moved away from Giffen’s nine-panel grid, there was just not enough space to properly check in with the large cast of this book.

That said, I did enjoy reading these issues, and liked the way the Bierbaums continued to build on what they’d done with Giffen.  Especially in comparison to what came next, which I will return to shortly.

One thing that really makes these issues stand out is the fantastic artwork by then-new artist Stuart Immonen, and his usual inker, Ron Boyd.  They moved the visuals of the book away from the more cartoonish work of Jason Pearson, and while being much slicker than Keith Giffen’s, they helped maintain the lived-in and adult feel of the book.  Their Legion looked older and a little weathered, and each character’s unique personality came through in their faces. I especially love the way they drew Laurel Gand, and I was glad that this team stayed on the book when the writing changed.  It’s not hard to see why Immonen went on to become a top-level artist.

In many ways, this was the end of the Legion for me.  After this, new writer Tom McCraw (who really started off promisingly, bringing back one of my favourite characters, Wildfire) reversed much of what Giffen and the Bierbaums had built, forcing the team to take on ridiculous secret identities.  The writing was on the wall though, as the march towards Zero Hour was already happening, and the Legion that I loved would be erased for ever. More on that next time though…

These issues have never been collected in a trade paperback.