DC Comics sole Publisher and also Chief Creative Officer of DC Entertainment, Jim Lee, made his first comments to fans about the direction of DC Comics at C2E2 during his spotlight panel.

The below include excerpts that have been reported.

Status of DC Comics as an independent comic book publisher.

To address some of the stuff that is out there, there’s rumors.. speculation. I wouldn’t put any credence into it. DC has been around for 85 years, and we’ll be around for another 85 years. I hope to be doing this panel in 85 years.

We’re a huge important. We’ve been with Warner Bros. for decades. The actual strategy for DC is to put publishing at center of what we do. It’s the engine of all the movies, tv, cartoons, we do. And so its my intent going forward as The Publisher, to lean into collective years of my team.

There’s a ton of people. We all work together. The collective years of experience is around 120 to 150, and we know business inside and out. Rest assured, company is in great hands.

It’s hard to talk about things we haven’t announced. Intention not to do a line-wide reboot. Is our focus in talking to editorial team, is to continue what we’ve done best: Character-driven stories, pairing right creators on right characters, and developing characters that are inclusive and diverse…

…If you are new to DC, I want to welcome you to the team and we’re going to have a lot of fun…

…My experience when running an organization, is you are the final arbiter of decisions but you’re also beholden to all the people that work for you that they’re happy, paid, employed. There was a lot of responsibility, and that kind of weighed on me heavily in this sale and merger with DC…

…There’s continually new things going on, and I look at being sole publisher now and the team I’m working with. Much more in trenches now than ever before…

…One size doesn’t fit all, and in many ways when you come into comics it shapes how you look at storytelling and what you want out of stories…

…I’ve been at DC since 1998, to that’s 22 years. And everything before that point, started seeing a natural rhythm… every 4-6 years, a new challenge, a new opportunity…

Only reference to Dan DiDio.

…I worked on that [DC Universe Online] for about five or six years, then Diane Nelson came into the picture and made Dan DiDio and myself publishers. That was a whole new experience, new opportunities, then CCO out of that. Means an interact with all the other WB counterparts – movies, games, tv, theme parks, etc…

…we understand tradition of DC is NYC-centric stories, North East coast-related.. but our goal is to reflect the entire world. And to me when I look to the future, I hope there’ll be even greater representation behind the camera – people editing, writing, drawing the books. 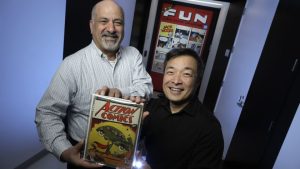 So, the takeaways for me are no reboot, Lee will remain sole publisher and his leadership style doesn’t include micromanagement (a seeming contrast to DiDio’s approach). The lack of mention of DiDio in any material away, whether their time working together, his legacy, etc. speaks volumes to the current environment from an HR perspective I think. Is DiDio suing DC, is DC being sued by his staff, is their an HR investigation going on, something else? Seems odd to be so silent about a figure you worked with so closely for so long and whose fingerprints are probably all over the next year’s, and perhaps a bit beyond that, DC Comics publishing plans.